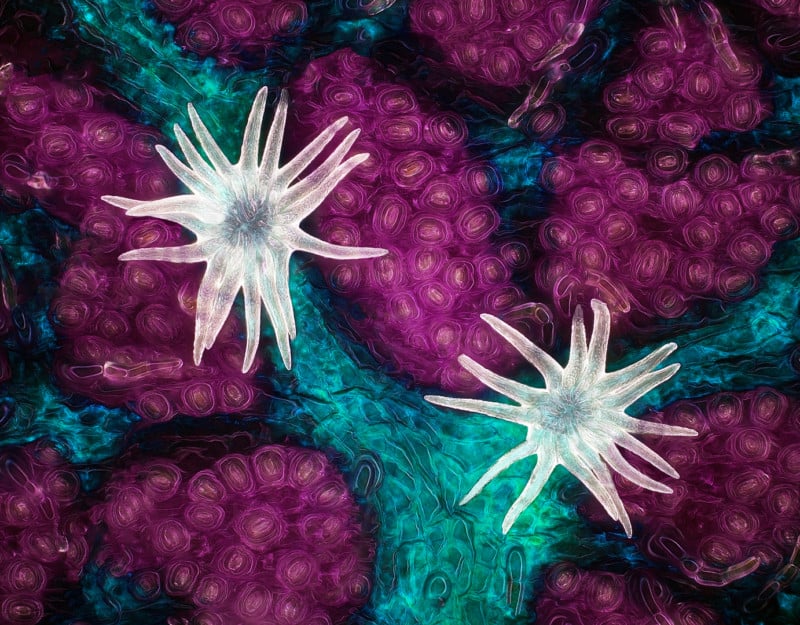 Nikon has announced the winners of its 47th annual Small World Photomicrography Competition. This year’s first-place prize was awarded to Jason Kirk for his striking image of a southern live oak leaf’s trichomes, stomata, and vessels.

This year, the competition received nearly 1,900 entries from 88 countries which were judged on originality, informational content, technical proficiency, and visual impact.

To capture his photo of an oak leaf, Kirk used various lighting techniques and design tools to create what Nikon’s judges determined to be a masterful example of the dynamic relationship between imaging technology and artistic creativity. Using a custom-made microscope system that combines color-filtered transmitted light with diffused reflected light, Jason captured around 200 individual images of the leaf and stacked them together to create the stunning image above.

Jason used both transmitted and reflected light on opposite sides of the leaf to highlight three vital structures. Prominently featured in white are the trichomes, which are fine outgrowths that protect a plant against extreme weather, microorganisms, and insects. In purple, Jason highlights the stomata, small pores that regulate the flow of gases in a plant. Colored in cyan are the vessels that transport water throughout the leaf. All three are essential to plant life.

Second place was awarded to Esmeralda Paric for her image of a microfluidic device containing hundreds of thousands of networking neurons. The primary neurons were extracted and cultured, then seeded and transduced with a virus. The particular image shows two populations separated but bridged, with different viral treatments. It was maintained for 30 days, immunostained, and tiled imaged.

Third place went to Frank Reiser for his photo of a rear leg, claw, and respiratory trachea of a hog louse (Haematopinus suis).

Below are the 17 other images — in order from fourth through 20th place — recognized in the top 20 photos submitted to the competition:

A full-color calendar of all the winners is planned to be produced. To see all images from the competition that were recognized by the judges, visit the Nikon Small Worlds Competition website.