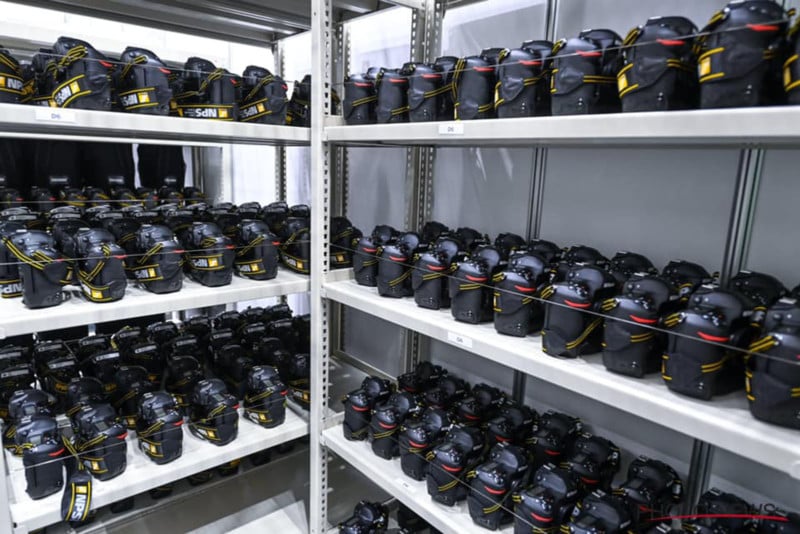 The 2020 Olympics in Tokyo may be devoid of fans this year, but photographers are still in attendance and companies like Canon and Nikon still have rooms filled with camera gear from floor to ceiling to support them.


Belgian sports photographer Vincent Kalut of Photo News shot and shared some photos of the Nikon Professional Services (NPS) gear room at the Summer Olympic Games in Tokyo this year.

The photos show dozens of $6,500 Nikon D6 DSLR cameras as well as a sea of lenses ranging from 800mm super telephoto lenses to 14mm wide angle ones.

NPS “operates cameras and lens depot for accredited photographers in the Main Press Centre located at the West Halls of the Tokyo Big Sight complex during all the Tokyo 2020 Summer Olympic Games,” Kalut says.

There are also technicians on hand to service equipment.

DPReview reports that although Nikon Z series mirrorless cameras and lenses aren’t found in these areas photographed by Kalut — something people immediately picked up on — the company does have Z6 II, Z7 II, and Z-mount lenses at the Olympics for photographers to use as well.

Canon was reportedly only planning to have a limited selection of gear on hand for emergency situations — photographers were told to bring all the gear they would need to shoot the Games — but the company announced last week that it would be establishing its full professional service center inside the Tokyo 2020 main press center.

Similar glimpses of equipment rooms were shared at the 2018, 2016, and 2012 Games. Getty Images is known to bring a formidable arsenal to the Olympics as well.