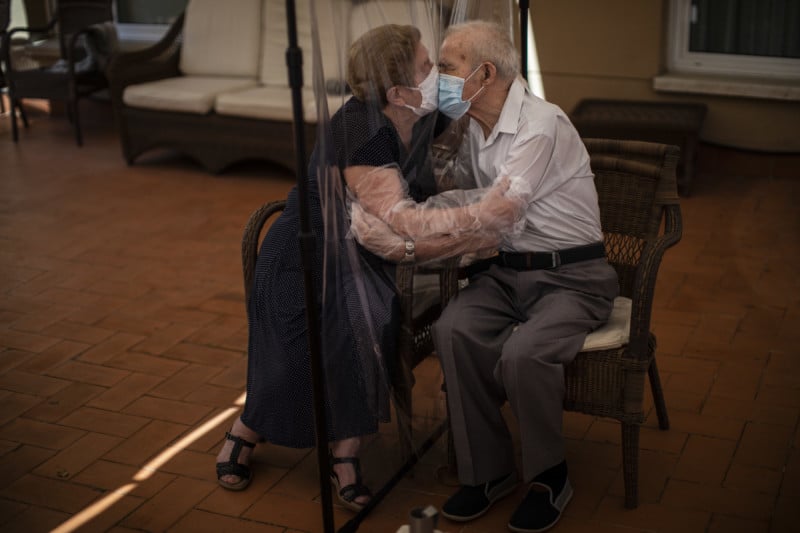 Last week, Associated Press photographer Emilio Morenatti delivered to a Spanish couple a framed copy of perhaps the most iconic photo of how the coronavirus pandemic has affected the elderly. In the photo, the two are seen embracing through a plastic sheet after 100 days of not seeing each other.

Morenatti won this year’s Putlizer Prize for Feature Photography for his series that documented the lives of the elderly in Spain who were struggling during the Coronavirus pandemic. The series includes the iconic photo of Agustina Cañamero, 82, and Pascual Pérez, 85 as they kissed and embraced through a plastic film screen (above) to avoid contracting or spreading the virus in a nursing home in Barcelona last year.

Cañamero and Pérez have been married for nearly six decades and the embrace was not only emotional for them, but for all those who witnessed it, including Morenatti.

It was one of many photos he would capture over the time he spent with the elderly. He originally took on the assignment around the end of February, 2020. He tells PetaPixel that press access to hospitals, morgues, and cemeteries was prohibited by the authorities, which limited his ability to document the effects of the disease in his country. But he endeavored to still find a way to put the experience of the pandemic into photos.

“I decided to act by my account, carried by my own instinct, as I did so many times covering conflict zones,” he says. “My challenge as a photojournalist has always been a call to reflection through my photographs. This time I wanted to focus on the most vulnerable, those older people who, as a metaphor, had already been excluded outside the society in which we live. The pandemic has exposed many things and one of them is how this society treats the most vulnerable — our elders.”

That instinct led him to reach out to a friend of his who is a nurse and who was taking care of sick people in their own homes. Her cases were mainly those elderly who lacked mobility and could not go to a hospital because they were too old. Additionally, at the time the public hospitals were saturated with COVID patients. He worked together with this nurse and other health care workers to gain access to the homes of these vulnerable elderly people.

He tells PetaPixel that it was not only challenging because of the subject matter, but because of the length of time and the inherent danger of exposure. Morenatti says that the work for this series lasted the entire time the pandemic raged in Spain — almost a year.

“At first, we were unaware of the properties of the virus and I remember that we were all very afraid when we entered the home of those elderly people, some of whom were infected with the disease,” Morenetti recalls. “Neither the nurses nor I had adequate protective suits, so we used large garbage plastic bags to make our own PPE suits. We worked with great uncertainty and fear, I remember.”

Morenatti says the idea of bringing the virus home terrified him daily.

“Every day, when I returned from photographing the sick and dead from COVID, I underwent a total disinfection plan and confined myself to my own home without having any contact with my children and my wife. The house was divided for months into the ‘clean part’ where they lived and the ‘dirty area’ where I lived for that period,” he says.

“I remember in the past, when I was really risking my life to get my photographs, I still didn’t know what being a father meant — I didn’t even think that one day I would have children. But when you have your first baby in your arms, then something changes inside of you forever. I think my children have made me a better person and also more vulnerable, because I want to see them grow up, that makes me a more conservative photographer. This pandemic has further marked that vulnerability due to the fear of infecting my kids through some of my coverage — that took my sleep away from the months I was covering this pandemic.”

Morenatti has been working as a photojournalist since 1989 and has extensive experience as a war zone photographer and worked with the Associated Press in Afghanistan, Pakistan, Israel, and Palestinian territories. In 2009, he was injured in a bomb blast.

Despite that experience, Morenatti says that his time documenting the effects of the pandemic was the source of fear wholly different than what he experienced in war.

“During all those years I have learned to deal with emotion and avoid the dangers of each delicate situation,” he says. “This coverage was different. We had a lethal enemy that was not shaped like a bullet or a bomb but could sneak into you and infect you, and I was very worried about going home and infecting my wife and two children, who are four and seven years old.”

He says that he sees many parallels between how he covered war zones and the precautions he had to take in order to safely carry out his coverage of the pandemic.

“We traded bulletproof vests and helmets used in covering wars for the PPE protective suit and hydro alcohol. And for me, the virus-related curfew imposed in a city like Barcelona — with its completely deserted streets – felt like the trenches on the frontline. Also, the fear transmitted by the eyes of the people I photographed and the uncertainty in the face of an unknown enemy were also common elements like in a classic war.”

To him, the elderly were the great victims of the pandemic. Much like was the case in other countries, when the virus infiltrated a nursing home, it had a disastrous impact on its residents.

“When an outbreak penetrated the residence it was devastating,” he says. “In Spain, there were nursing homes where almost half of its residents died from COVID. That bothered me a lot and I was obsessed with being able to cover all that but it was not easy for me to get access there. It took me months to be able to enter one of those residences to photograph those deaths in solitude, elderly people who died in isolated rooms away from the rest of the patients and the service personnel, far from receiving a last hug or a last goodbye.”

Morenatti says that the emotions of the experience greatly affected him.

“I have to admit that I have cried behind the camera with some scenes, and that thanks to that emotion of that moment I have managed to fine-tune the degree of expression to be able to transmit as much as possible and get the most out of the moment. Perhaps the most moving image of all was the kiss between Agustina and Pascual who, between a large plastic sheet, give an infinite kiss, thus sealing an infinite love in time of the pandemic.”

Not every photo he captured he chose to share. While in the moment, he focused on capturing excellent images, he says that when he looked back at them after he concluded a session, he would use his common sense and personal ethics to determine if the photo needed to be shared.

“I have a few photos that, to preserve the dignity of the person I photographed, I decided to put them into the recycle bin.”

Amidst the exigent circumstances of his assignment, Morenatti said that it was critical for him as a photographer to keep a low profile. He explains that for him, his gear must be low profile above all else and allow him to photograph events without invading the personal space of his subjects.

“Maintaining an empathic distance with the subject I am photographing is something that is absolutely important,” he says.

“I remember that first assignment with AP based in Kabul for a year in 2004. Those Nikon D1h [cameras] were a real frustration because the batteries only lasted a few dozen shots. At that time I used 128-megabytes memory cards to record 1.5-megabytes photos that I could barely crop.

“Everything has changed a lot. In the last 15 years, I have been using Canon equipment, my penultimate cameras were the 5D Mark II, always mounting a 35mm and 50mm. The results obtained with these cameras have been spectacular, both in color and in reliability,” he recalls.

But at the onset of the pandemic, he started testing the Sony Alpha 9 II and says he experienced a substantial change to his photography because of it.

“Thanks to this camera’s silent shooting mode and its discretion, I have managed to take some of the photos that won the Pulitzer. Now my gear is set by two new Sony Alpha 1 units, a 35mm, 50mm, and a 135mm,” he says. “I think, [this is] the most competitive team I have ever had. I don’t think the camera makes the photographer but being technologically up-to-date is an essential part of being competitive.”

When asked if there were notable highs and lows to his time documenting the pandemic, Morenatti explains that he doesn’t quite think of experiences like that.

“I once heard a veteran photojournalist say that every photojournalist is just a unit of production. And I feel like that, I produce every day for the AP. I go out there and come back with my photos after a search, like an ancient hunter. There are days when I go out and I return with nothing, not even a single photo, after hours,” he says. “However, another day unexpectedly, I come back with images that define that day, and that is the most beautiful part of this job. I consider myself a person who brings out the positive from what could be negative, therefore it is very difficult for me to answer this question since I only keep the most edifying of each day, I discard the other. It’s pure emotional survival, I think.”

While he has spent so much of his career in dangerous environments, something about the closeness of this pandemic to his home made it particularly challenging for him, even with years of war experience behind him.

“Covering the conflict in the backyard of my house has been something that I never thought I would have to do,” he says. “All those photos were taken no more than five kilometers from my house, which makes a great difference with other conflicts I previously covered. This also happened in my own environment, my own neighborhood, my own city.

“It makes me even more empathic with the situation.”

Header Photo: Agustina Cañamero, 81, hugs and kisses her husband Pascual Pérez, 84, through a plastic film screen to avoid contracting the coronavirus at a nursing home in Barcelona, Spain, June 22, 2020. Even when it comes wrapped in plastic, a hug can convey tenderness and relief, love and devotion. The fear that gripped Agustina Cañamero during the 102 days she and her 84-year-old husband spent physically separated during Spain’s coronavirus outbreak dissolved the moment the couple embraced through a screen of plastic film. | AP Photo/Emilio Morenatti

Photographer Shares Creative Photo Tricks You Can Try at Home