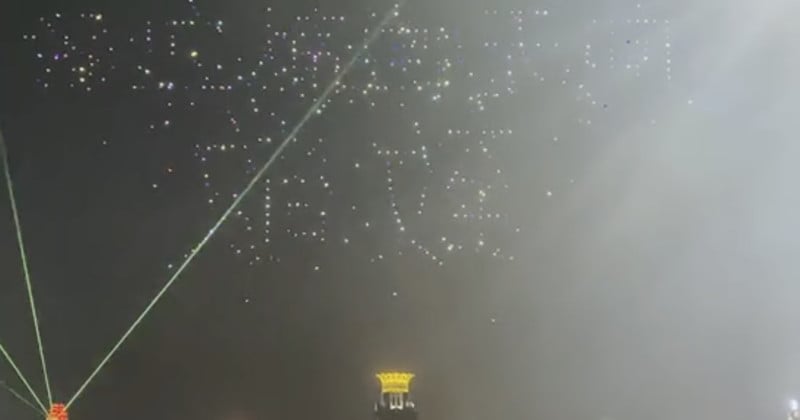 Drones have been used as an accompaniment to fireworks or as wholesale replacements for several years and most have started and concluded without issue. But during a show in Shanghai on June 14, something went terribly awry and caused a mass of drones to unexpectedly tumble out of the sky.

As noticed by DroneDJ and reported by Kazhaji, a video that originated on Chinese social media shows how the event unfolded. The event took place in Shanghai — over the Bund waterfront area — and the show appears to be going as planned until a large segment of the drones simply drop out of the sky.

Some drones are seen falling faster than others and some do not change position at all. As described in the short video and on others uploaded to Weibo, “dozens of drones” can be seen free-falling out of the sky and Kazhaji speculates that since such an incident is so rare, some kind of human error was to blame. That said, at the time of publication, no details on what exactly went wrong could be found.

Kazhaji also notes that there have been murmurs of injuries, but no specifics were provided. That note of injuries is a bit strange, as the areas underneath the drones are usually blocked off and onlookers would not see much from a position directly below the formations either. However, Kazhaji writes that some ships can be seen under the drones in this particular case, which may mean that the falling UAVs could have landed on unsuspecting people on the decks of those boats. In the video above, some drones can be seen impacting the water around the boats.

According to DroneDJ, at least one Chinese drone show company has denied its involvement, but additional details are scarce.

While rare, injuries caused by light show drones do happen. In 2018, a California woman named Monika Nourmand was seriously injured when a drone that was part of a light show at Caesar’s Palace apparently flew into her face without warning. As seen in the video below, it caused significant injury to her eye region.

Nourmand has sued Caesar’s Palace, Great Lakes Drone Company, and the drone operator for negligence. Court documents reveal both the drone company and operator denied the allegations against them and said they complied with FAA regulations.