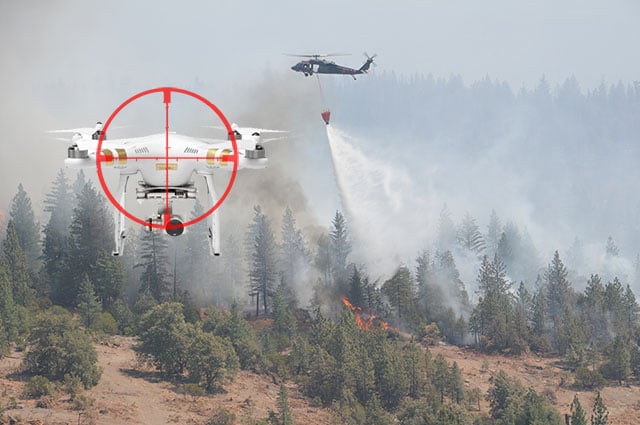 There have been several incidents recently of camera drones getting in the way of firefighting efforts in California, including a case last week of firefighters being hindered in saving burning cars from a wildfire. Now lawmakers are taking action to deal with this problem.

An upcoming bill aims to give firefighters permission to knock camera drones out of the sky in order to safely do their job.

On Monday, California Senator Ted Gaines announced that he will be introducing a new bill, Senate Bill 168, to help protect firefighters from camera drones. While the full text of the document hasn’t been published yet, Gaines says that it “grants immunity to any emergency responder who damages an unmanned aircraft in the course of firefighting, air ambulance, or search-and-rescue operations.”

In other words, if your camera drone is getting in a firefighter’s way, they will be allowed to remove your drone from the air by whatever means necessary to make the situation safer for themselves, without having to worry about being sued.

“This bill will help make sure the skies are clear of drones and that the brave men and women fighting these fires can do their job of protecting the public without worrying about frivolous lawsuits,” says Gaines.

Gaines and co-author, Senator Mike Gatto, are also partnering up on another bill (SB-167) that introduces harsher punishments for drone users that are caught interfering with firefighting efforts — penalties such as a fine of up to $5,000 and 6 months in jail.

“Private drones don’t belong around these emergencies. That is the first message I want to get out,” says Gaines. “But if one gets damaged or destroyed because it’s in the way then that can’t lead to financial penalty for the people trying to save lives and property.”

“It’s unfortunate, but that’s all it is. People can replace drones, but we can’t replace a life,” he says. “When our rescuers are risking their own lives to protect us, I want them thinking about safety, not liability.”

Last month, firefighters in New York made headlines after being filmed trying to knock a drone out of the sky with blasts of water. If the upcoming SB-168 passes in California, then that technique will be a legal, and perhaps preferred, method of drone disabling.

(via Senator Ted Gaines via Engadget)

Image credits: Header illustration based on photo by the California National Guard

How to Hold Your Camera: Tips from a Chiropractor