Sirui has announced the launch of a new 75mm f/1.8 1.33x anamorphic lens that it says will give filmmakers the ability to capture telephoto footage with an anamorphic look and feel affordably.

This new focal length will offer the same characteristic stretched oval bokeh and streaked flares that anamorphic lenses are known for and that other 1.33x lenses made by Sirui have. The anamorphic look combined with a wide f/1.8 maximum aperture, 13-blade iris, and 1.2-meter (47.24 inches) close focus distance offers filmmakers what the company promises will be beautifully blurred backgrounds with excellent foreground separation, which it says allows for stunning portrait shots.

This particular lens is made for APS-C sensor cameras (Sony E, Canon EF-M, Nikon Z, Fujifilm X, and MFT for Z Cam, Panasonic, Olympus, and BMPCC4k), and joins the existing lens lineup of 24mm f/2.8, 35mm f/1.8, and 50mm f/1.8 1.33x anamorphic lenses. All four of these lenses have a common aesthetic and handling, and when combined they form a set that filmmakers can use to tell a complete cinematic story, switching freely between scenes while maintaining common background rendering. It claims that the stunning optical quality coupled with their small size means that they can be used professionally to shoot drama, commercial, weddings, or documentary work. 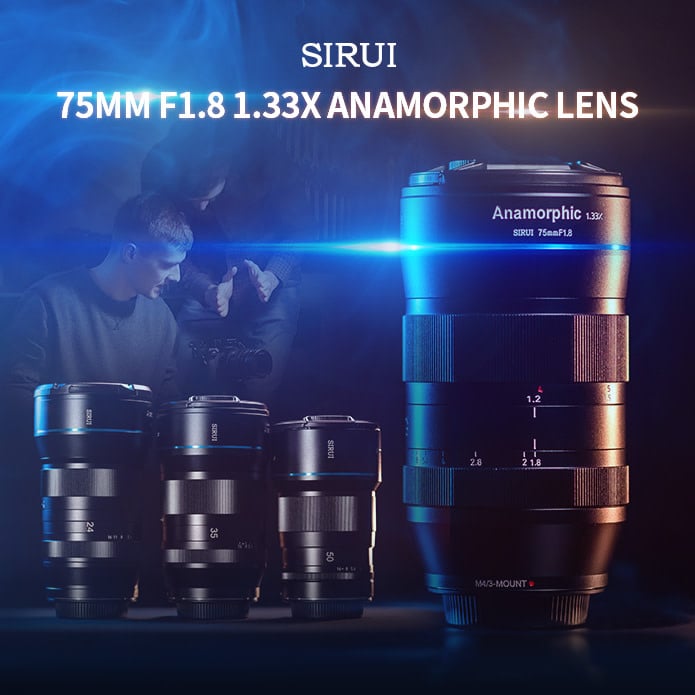 The oval-shaped anamorphic elements of the 75mm f/1.8 1.33x create a 33% increase in the horizontal field of view when compared to a regular spherical lens. This image is then “de-squeezed” in post-production to achieve an anamorphic image with the correct aspect ratio.

“Until recently, options for affordable anamorphic shooting have been very limited with traditional anamorphic cinema lenses costing tens of thousands of dollars, and DIY anamorphic adapters based on optics designed for projection are bulky and have other limitations,” Sirui says. “Now videographers can own a complete four lens set of Sirui anamorphic lenses for less than the price of a single anamorphic lens from some other manufacturers.” 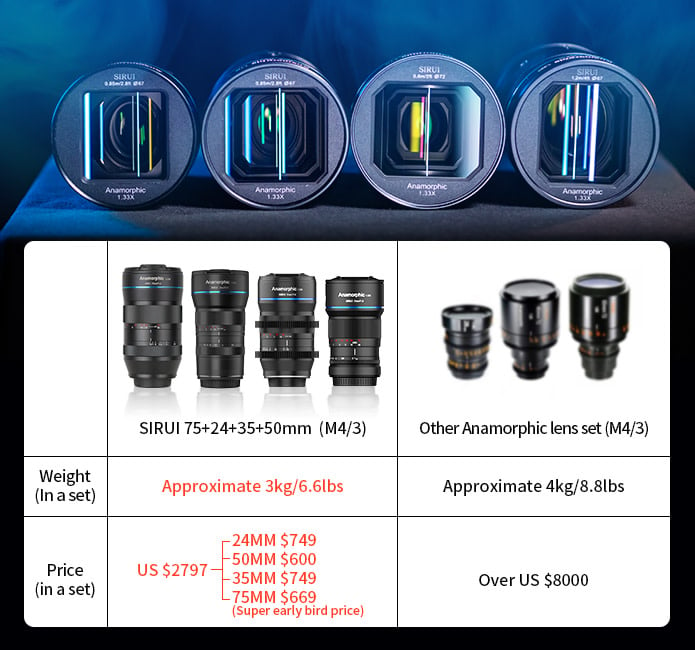 The company says that the lens is solidly constructed of metal and weighs just 795 grams (1.75 pounds) in MFT mount and is between 130.4mm and 134.1mm long depending on the mount type chosen. It has a 67mm diameter filter thread and non-rotating lens front that allows for easy attachment of screw-on variable ND filters or polarizers, and it has a long 186-degree focus throw for precision focusing.

The new Sirui 75mm f/1.8 1.33x Anamorphic Lens is currently available to pre-order on the Indiegogo crowdfunding platform at a “Super Early Bird” price of $669 US, with those orders estimated to ship early next month (June, 2021). This will be the sixth crowdfunded campaign launched via Indiegogo for Sirui, with a total of almost 10,000 backers.

Panasonic Announces Development of GH6, Will Launch By End of Year