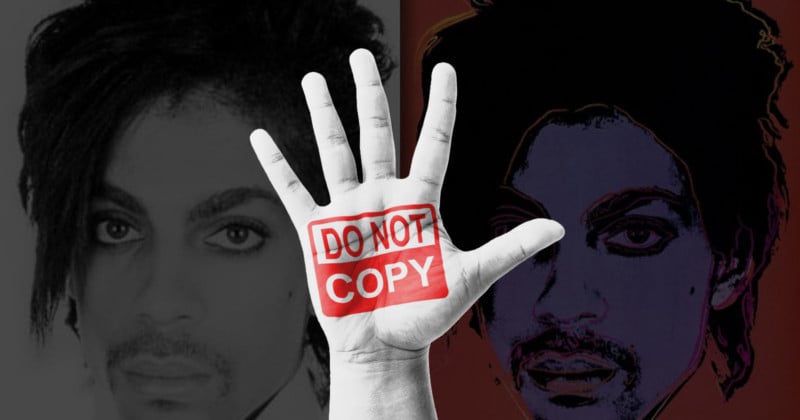 When is copying another’s work not stealing? Andy Warhol copied a photograph taken by Lynn Goldsmith of the musical artist Prince and created sixteen colorized and stylized visual works.

The Foundation claimed that Warhol’s copying of the photograph was not infringing because it was “fair use.” Since the founding of our country, the law has protected copyrighted works but has also recognized circumstances, permitting others to build upon those copyrighted works in the creation of new ones. It is the tension between these two concepts that created the fair use doctrine—when it is fair for a creator to utilize another’s copyrighted work.

The district court agreed with the Foundation that Warhol’s use was fair use. Last month, the Second Circuit Court of Appeals reversed and concluded that it was not fair use. The appellate court found that looking at the photograph and the Warhol work side by side shows that the overarching purpose and function of the two works are identical—they are created as works of visual art and are portraits of the same person taken at the same time from the same view. And the Warhol work retains the essential elements of Goldsmith’s photograph without significantly adding to or altering those elements.

The court explained that Goldsmith’s photograph is instantly identifiable as the basis for Warhol’s work. Warhol could have obtained any photograph of Prince to use as his source material. He did not need to take Goldsmith’s.

Recently, one critic has taken issue with the appellate court’s opinion. Blake Gopnik, a writer for the New York Times and an author of a book about Warhol, argues that the Court of Appeals was mistaken in not finding that Warhol’s copying was fair use. Gopnik is wrong and shows he is ignorant about copyright law and especially fair use.

There are no bright-line rules as to what constitutes fair use. The 1976 United States Copyright Act codified the fair use doctrine from prior judicial decisions. Section 107 of the Copyright Act provides examples of uses that are fair—criticism, comment, news reporting, teaching, scholarship, and research—and provides four non-exclusive factors to consider on a case by case basis:

All of the factors are to be explored, and the results weighed together, in light of the purposes of copyright.

There has been much confusion about the first factor, the purpose and character of the use. Courts look to see whether the use of the new work is transformative—“whether the new work merely supersedes the objects of the original creation, or instead adds something new, with a further purpose or different character, altering the first with new expression, meaning, or message.”

In viewing the two works, the appellate court concluded that Warhol had not “added something new” to the photograph. Adding a new aesthetic or new expression to an existing work is not necessarily transformative. There is another type of protected work that incorporates an original work and adds something new: a derivative work. For example, a film adaptation of a novel is a derivative work, even though the novel is combined with the cinematographic interpretive skills of the filmmaker, and even though there are additions of new aesthetics and messages to the underlying literary work.

Where a new work comments on or relates back to the original (like a movie review), the new work is likely to be considered transformative. Where it does not, the new work must reasonably be perceived as embodying an entirely distinct artistic purpose, one that conveys a “new meaning or message” entirely separate from the original work to be considered transformative, usually accomplished by drawing from numerous sources, rather than simply altering or recasting a single work with a new aesthetic.

Other examples by the artist Richard Prince show the difference—those that juxtaposed an original work with other photographs and obscured and altered the original work to the point that it was barely recognizable, were transformative, while those that did not, were potentially infringing.

With that brief summary of fair use in copyright, we return to Gopnik. Gopnik starts by making the sweeping proclamation that the judges “knew more about art than any old critic or philosopher,” and that Duchamp and Warhol appropriation art “were not worthy of the legal protection that other creativity is given under copyright law.” The judges did no such thing.

[T]he task before us is not to assess the artistic worth of the Prince Series nor its place within Warhol’s oeuvre; that is the domain of art historians, critics, collectors, and the museum-going public. Rather, the question we must answer is simply whether the law permits Warhol to claim it as his own, and [the Foundation] to exploit it, without Goldsmith’s permission. —2nd U.S. Circuit Court of Appeals

What the judges did do was look at the specific facts of the case and apply the law to those facts as the law requires them to do.

Courts have found the use of an original work transformative even though there was no alteration to it because the original work was being used for a completely different purpose, such as criticism, commentary, or parody—the precise examples Gopnik uses to imply that the court’s decision is contrary to what fair use is supposed to protect.

But instead of looking at whether the Warhol works constituted fair use by reviewing the four nonexclusive factors, Gopnik focuses only on part of the first—transformative use. Transforming the use of an original work does not necessarily mean that that the artist’s use was fair. In fact, the Supreme Court has repeatedly made clear that the fourth factor, the effect on the potential market, is the most important.

In fact, the Second Circuit, relying in part on the testimony of Goldsmith’s expert witness Jeffrey Sedlik, recognized that photographers are in the business of licensing their works for all manner of purposes, in all manner of media, to all manner of clients, throughout the life of their copyrights. The Court emphasized that as the potential exists for a photographer to license a work for any type of use, the market for that work is harmed even when a photographer has never licensed a work for a particular type of use or has withheld licenses for that type of use. In particular, the Court found that the photographer’s exclusive right to control the creative of derivative works is harmed when other artists create new works based on the photographer’s original, even when the appearance of the new work is in a different medium, or is substantially altered.

Both Goldsmith and Warhol have a long history of offer their works for use in magazines. Yet Gopnik provides the sound of crickets as to how Warhol’s copy of Goldsmith’s photograph may have supplanted Goldsmith’s photograph on the cover of the Prince tribute magazine. And, something the court did not address was the fact that Goldsmith has created colorized versions of some of her photographs for commercial exploitation, thereby further confirming that Warhol’s work directly competes with Goldsmith’s.

From there, Gopnik goes completely off the legal rails. First, Gopnik applies his misunderstanding about transformational use to Warhol’s prior famous works, such as Brillo and Campbell’s Soup, implying that under the court’s reasoning, those works would not be considered fair use because they “don’t draw from numerous sources” and “they don’t make any kind of aesthetic change at all to the single image they are copying from.” But such implications are wrong because there is no requirement that for a use to be transformative, an artist must draw from numerous sources.

Additionally, Warhol took product packaging used for advertising and transformed their use into a piece of visual art by adding “something new, with a further purpose or different character, altering the first with new expression, meaning, or message.” In contrast, Goldsmith’s photograph was already a piece of visual art, and both depict the same moment in time of the same artist, Prince, from the same angle, and Warhol’s work undisputedly incorporated copyright-protected elements of Goldsmith’s photograph without her permission.

But the court could not definitively determine whether the minimal changes made to other works were sufficiently transformative. For example, Cariou’s photographs were “readily apparent” in Richard Prince’s work Graduation, where he “did little more than paint blue lozenges over the subject’s eyes and mouth, and paste a picture of a guitar over the subject’s body.”

Astonishingly, Gopnik argues that the court should have found the works such as Graduation to also be fair use, even though most, if not all, legal scholars and judges disagree with Gopnik’s position. Cariou’s photograph in Graduation is clearly recognizable, and Richard Prince does not comment or relate back to Cariou’s in any way. Richard Prince could have used any photo to create his art, but instead he chose to take Cariou’s, without any necessity, reason, or purpose.

To constitute fair use, there “must be real, substantial condensation of the materials, and intellectual labor and judgment bestowed thereon; and not merely the facile use of the scissors; or extracts of the essential parts, constituting the chief value of the original work.” For works such as Graduation, Richard Prince’s lack of intellectual judgment and “facile use of scissors” does not make his use of Cariou’s photograph fair.

As the Supreme Court has noted, if the copying is done to “avoid the drudgery in working up something fresh, [then] the claim to fairness in borrowing from another’s work diminishes accordingly (if it does not vanish).”

If Gopnik’s misguided theory of fair use were adopted, no artist, including Warhol, would be safe from the wholesale stealing of his or her creative labors, and we would all be poorer because of it.

About the author: Robert E. Allen is an intellectual property attorney at Glaser Weil LLP in Los Angeles, specializing in copyright and entertainment matters. Robert represents photographers, musical artists, songwriters, actors and social influencers, in both litigation and transactional work.

How to Make a DIY Portable V-Flat