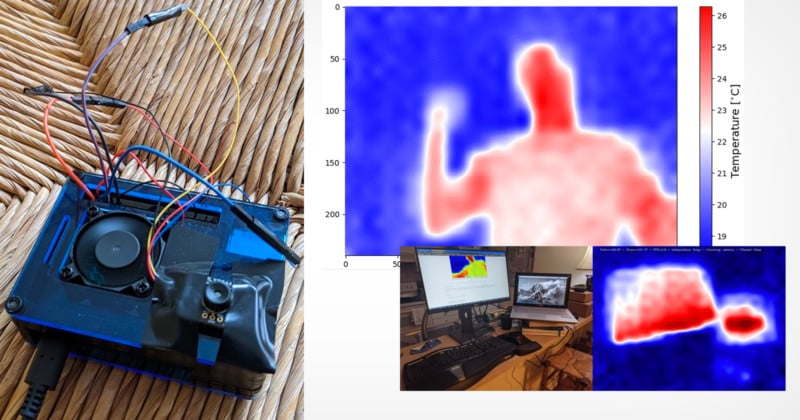 Thermal cameras are expensive. They can cost anywhere between a few hundred to a few thousand dollars to buy and can cost $50 a day to rent. So why not just build one for around $100?

As published on the Raspberry Pi blog, DIY-er Tom Shaffner wanted to check his house with an infrared camera to see where he could improve his insulation (seeing as he is spending a lot more time there working from home). To his dismay, doing so was shockingly expensive. After seeing the $50 a day rental fee from the local hardware store, he decided a better option would just be to build one himself.

Shaffner has published the entire build instructions and necessary software setup steps to Github for all to enjoy.

As DIY Photography reports, the build is very affordable. The MLX90640 Thermal Camera from Pimoroni costs just $50 and he attached it to a $35 Raspberry Pi 4, a $10 Raspberry Pi SD card with Raspbian installed, and a $12 power supply, bringing his total investment to just $107.

If you want to get fancier with it and have it function as you walk around, you’ll want to find some way to see the camera’s output live.

“You’ll probably need a portable battery for the device and, if you’re not going to stream the video over your Wifi, you’ll want a screen to attach to the Pi,” Schaffner writes. “I went with the Wifi option so I can’t speak to screens, but I’d imagine any of the many Pi-specific screens would be fine for this.”

Just a few years ago, the best cheap infrared cameras would only produce an 8 x 8 resolution, which isn’t great and wouldn’t really be good for this application. However, the new MLX9040 jumped that resolution to 24 x 32 which allows each frame taken to show 768 different temperature readings.

Below one of Schaffner’s example images that shows how the infrared camera views a scene where the lamp is hot, while the windows are cold.

And, most importantly, the image below where Schaffner uses the device to find missing insulation that he can now fix. 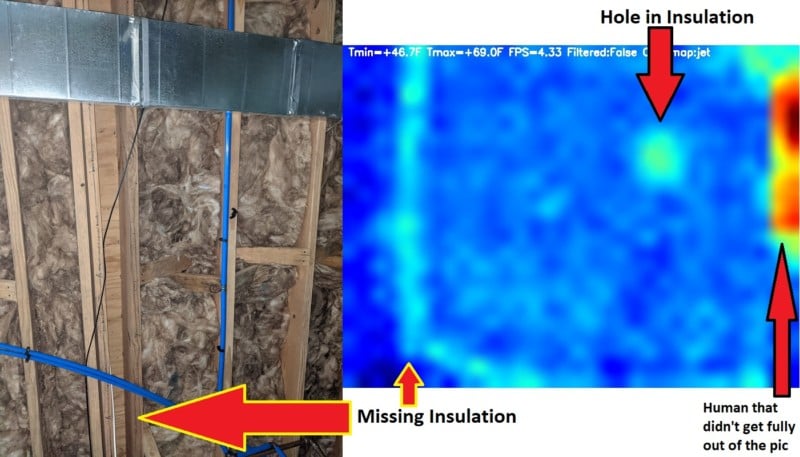 Schaffner also notes that the simplicity and connectivity of the device would also make it ideal for a security camera.

“While the MLX90640 will never provide pictures or video of the level of fidelity that some much more expensive professional cameras provide, what’s shown here is more than enough to demonstrate the efficacy and usefulness of the camera both for entertainment purposes, as a security camera, and for a thermal evaluation of a house,” Schaffner writes. “The version of the camera with a narrower viewing angle (55 Degrees instead of 110) would likely be better for the thermal evaluation purpose but be of less value as a security camera.”

If you’re interested in building your own infrared camera, make sure you read Schaffner’s detailed build instructions and use case examples on Github.