It’s been a rough year for camera sales, but CIPA’s latest report on October’s global camera shipments is showing that the worst might be behind us. While the September report showed a nice upwards sales trend, October has shown a near-full recovery of the market.

The shipment volume of digital cameras in October was only 77.2% of the previous year’s number, but 95.1% of monetary value. That monetary recovery is basically back to what would be expected in a normal year. So while fewer cameras are being purchased, the ones that are selling are much more expensive than the ones that were sold in the same period in 2019. 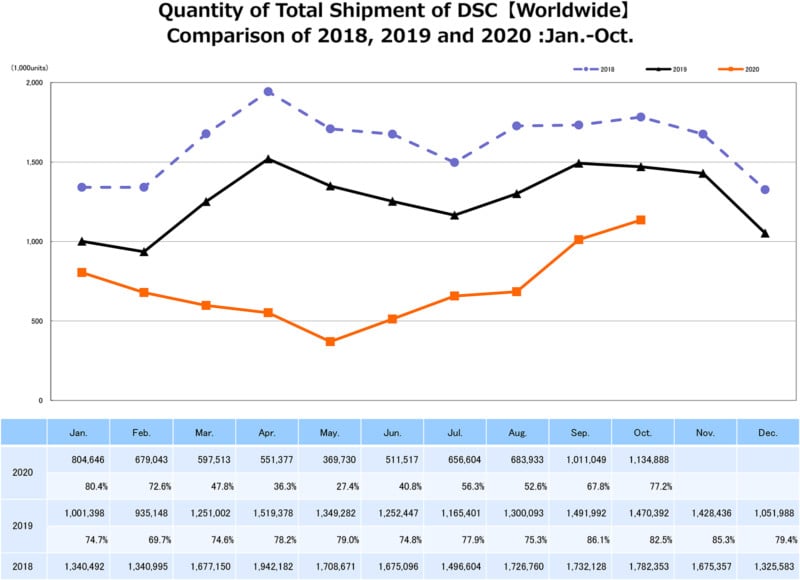 Among those cameras sold, those that integrate a lens are still selling poorly in comparison to the same period in previous years. Volume-wise, fixed-lens cameras sold at 63.7% on a volume basis, and 72.7% on a monetary basis compared to October of 2019. This is the segment that seems to be responsible for bringing down total sales figures to sub-100% of monetary sales overall, as interchangeable lens camera sales were incredibly healthy. 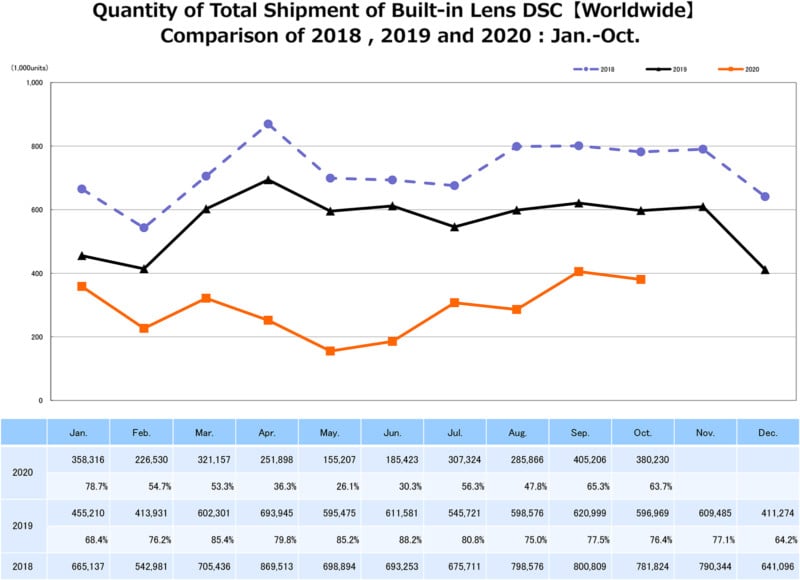 Interchangeable lens cameras, which encompasses both mirrorless and DSLRs, saw 86.4% of volume compared to 2019, but a resounding 100.5% of monetary value. DSLRs saw 339,000 units sold while mirrorless cameras moved 416,000 units. 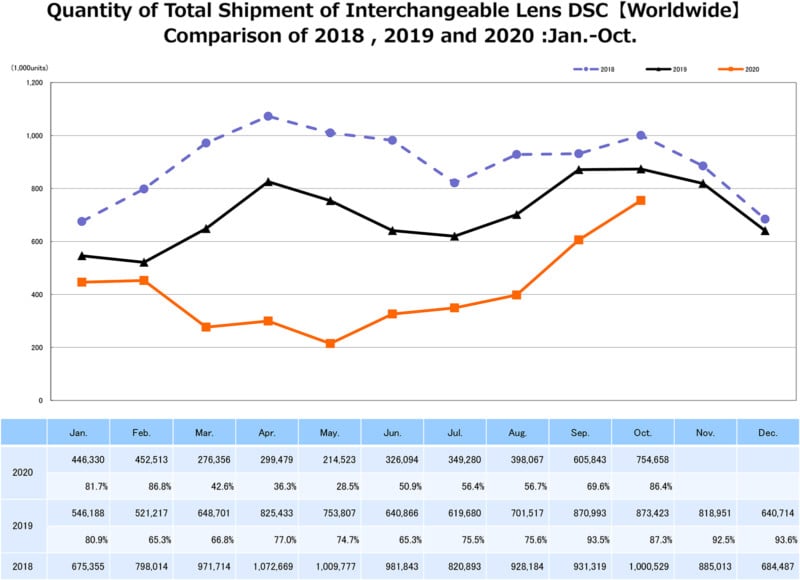 Within that segment, DSLRs saw 79% of volume sales and 78% of monetary sales when compared to last year. This is a significant recovery from the poor showing from September. Mirrorless cameras boomed, showing 93.6% of volume and a resounding 111.9% on a monetary basis.

No doubt the availability of Canon’s EOS R5 and R6 as well as Sony’s a7S III and the success of those cameras has helped boost the segment.

When you look at the volume of DSLRs sold, the numbers seem rather impressive. Moving 339,000 units in October of 2020 is about 45% of the total interchangeable lens market. Considering that the general online perspective is that DSLRs are “dead,” the fact they still sell in such numbers may indicate otherwise.

However, even with 45% of the volume sales, DSLRs brought in three times less monetarily than mirrorless cameras that only account for 10% more of the volume share.

That seems to indicate that when DSLRs sell, they are low-end, low-cost camera bodies. This is in stark contrast to how mirrorless sales are trending.

Considering that reports have claimed Nikon is still going to produce DSLRs going into 2021 while all indications show that Canon and Sony have moved on, it should be interesting to see if Nikon is capable of defying statistics and recovering from a dire financial situation with its mixed DSLR/mirrorless strategy. Considering high-end DSLRs are not the driving force of that segment, continuing to produce them may not prove fruitful if statistics are to be believed.