Today we’re going to take a look at two film cameras. We have the Pentax 645nII and the Contax 645: two of the last medium format film bodies ever produced, and the two most popular go-to cameras for wedding shooters who are still shooting film.

There are lots of reasons why this is the case. While they don’t have fancy Eye autofocus or anything like that, they both have pretty good autofocus systems, very fast motor drives, and all the basic bells and whistles you could get on a film camera in the early 2000s.

They also have a meter inside. So if you want to use a meter you can shoot quickly, you can actually rely on the meter, especially if you’re shooting negative film where you have a lot of latitude. 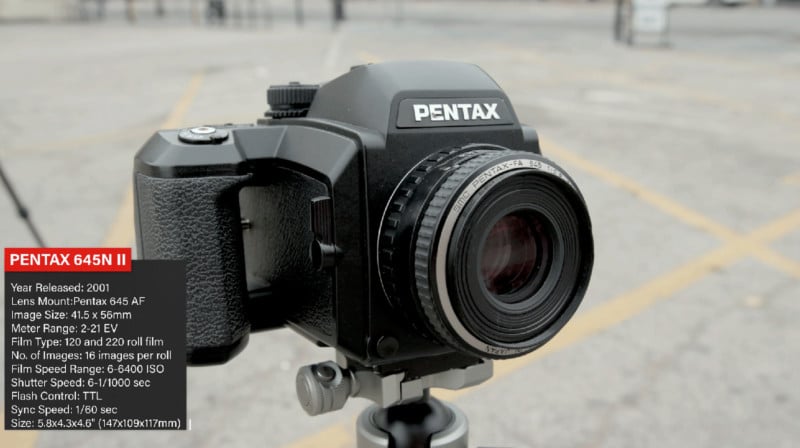 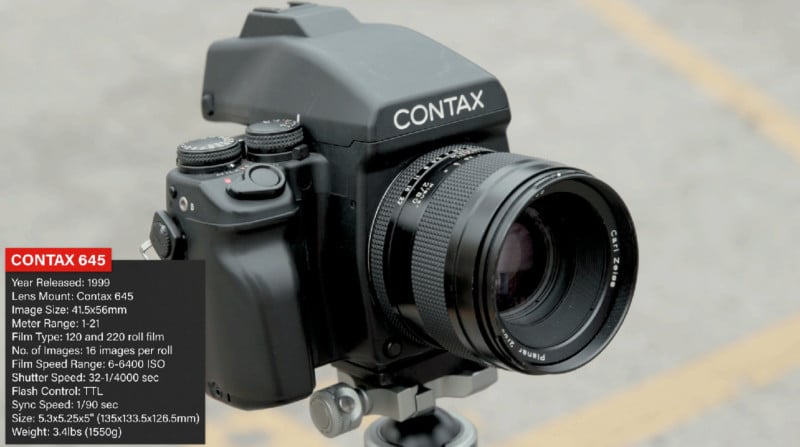 There is a price difference between these two. The Contax is way more expensive at around $3,000, whereas you can get the Pentax for around $1,000. However, the Contax has a Swiss Planar T Zeiss lens, which is an incredibly sharp lens, and you also have a removable back on the Contax.

Pentax does not have a removable back, which means you have to fire through your whole roll of film before you can change. That’s a huge bonus for the Contax. 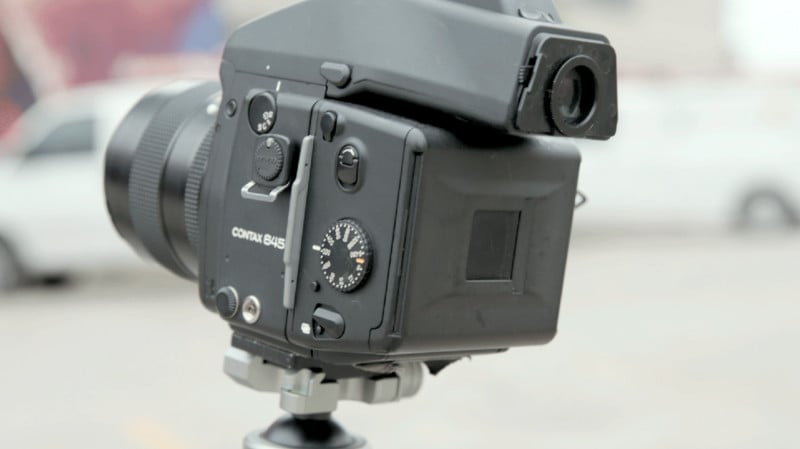 Another thing worth mentioning is that the lens on the Pentax only goes down to f/2.8, whereas the lens on the Contax goes down to a f/2. A lot of people think that that’s kind of a big deal. They like the idea of shooting at f/2, especially with the medium format. So I’m interested to take some portraits and compare the two to see how much of a difference it makes.

But aperture aside, the Pentax lens also doesn’t feel quite as nice as the Contax, and it shows up in the image quality. Speaking of which…

When comparing images from these two cameras, right off the bat, you do see there is a little bit more warmth in the Pentax. This image is a little out of focus with the Pentax unfortunately, but you do see that warmth there. And a little more contrast with the Contax Zeiss Lens. 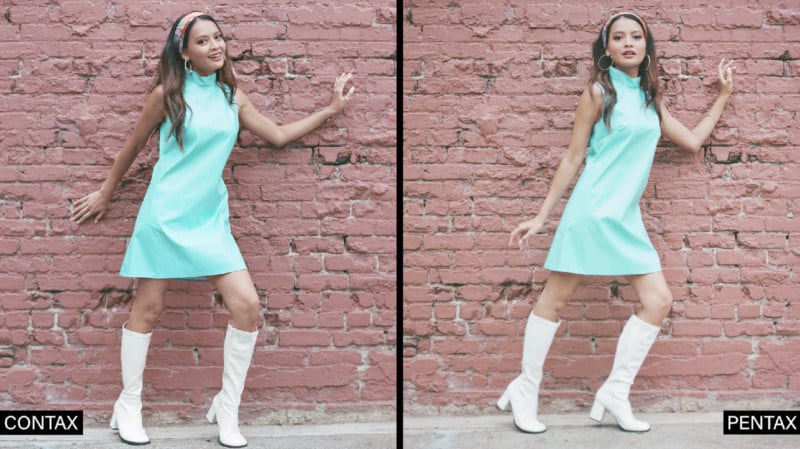 Of course, you are scanning these things after processing the film, so whoever is making the decisions on these scans can push them around a lot. It’s just like being in Lightroom or Camera Raw. I would guess you could make these things match pretty close if you want to, but right out of the gate, with no additional work, the Contax has a richer, heavier color, heavier blacks, and heavier contrast than the Pentax. 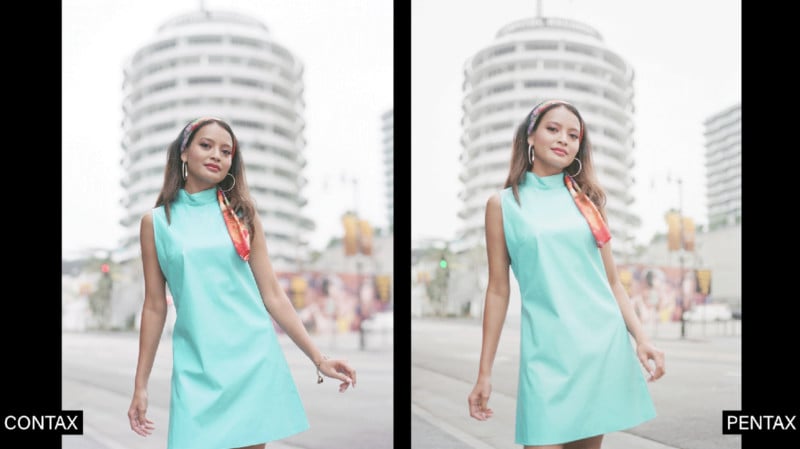 Here we have our shot of the Capitol Records building. It is out of focus again on the Pentax.

We were at a distance here, and at this distance with the background that far away, the way the two lenses fall out of focus feels very similar. They’re both set to f/2.8, and they feel very similar, although there is a difference in the character of the bokeh.

If you look at the bokeh on the Pentax on the right it’s more oblong, whereas the bokeh is more round on the Contax. 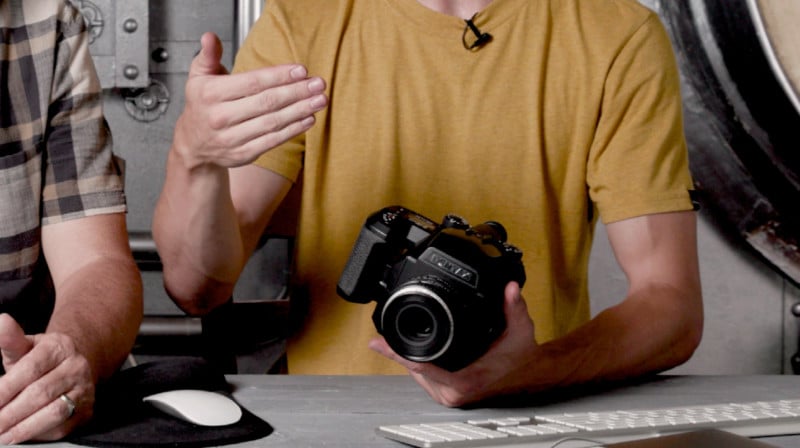 When we were out working, the Contax was a little slower on the autofocus, even in bright sunlight. When we came back indoors and tried pointing both cameras at things here inside, that’s where the Pentax really pulled ahead. Both cameras would hunt, but the Pentax could actually find a subject and lock on somewhere with pretty much every frame. The Contax never stopped hunting, and because it can’t autofocus it can’t take an image.

I would say autofocus in a low light situation with the Contax is unusable. The Pentax seems a lot more usable in lower light and the viewfinder is brighter in the Pentax. So the ease-of-use in low light is better with the Pentax. That’s quite an advantage…

But back to the image comparison. 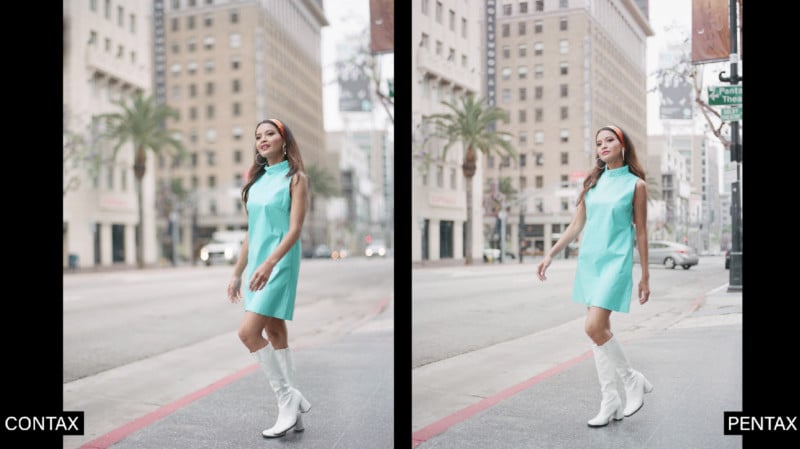 In this image, you can really see the difference between f/2.8 on the Pentax and f/2.0 on the Contax—it really falls out of focus much quicker, rendering a much prettier background with beautiful bokeh. I also love the way it resolves the lines around the trees.

It’s not all due to the aperture though, as you can see in the image below: 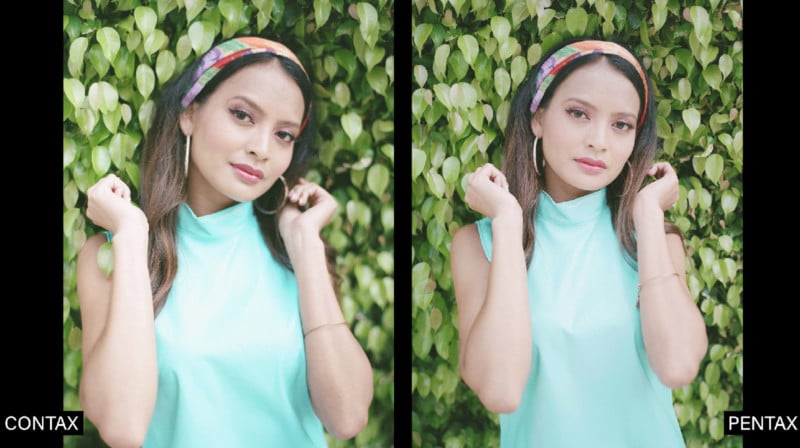 In contrast, this is probably the image where they look the most similar, although you definitely see a little more detail in her skin with the Contax. You get those nice lines in her face, and just a little more definition. With the Pentax, you get a much softer look—it feels almost like you’ve softened her face in post. 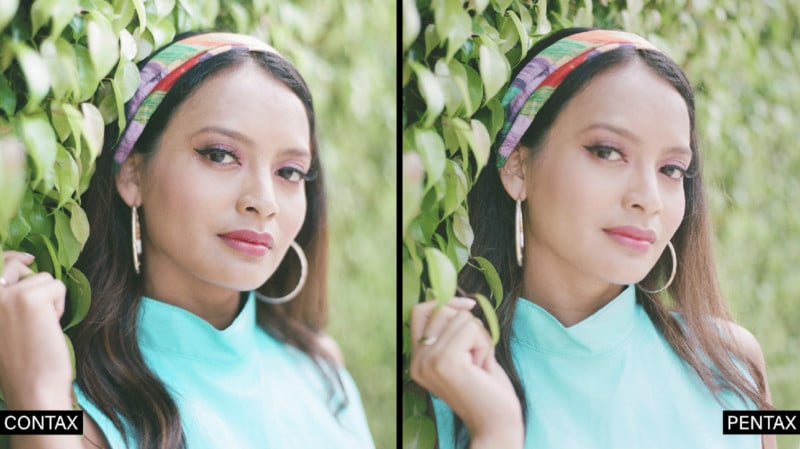 And here’s our final image. Unfortunately the Pentax was (again) not quite focused right here—it’s not focused on her right eye, it’s focused on her left eye. 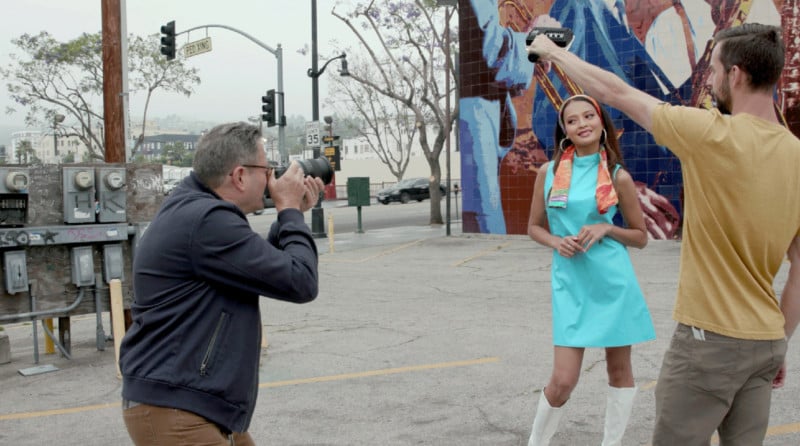 If I was a wedding photographer and I was doing this seriously, I would definitely get a Contax. Yes, even with the autofocus being unusable in low light, I would just manual focus the Contax. The image quality is worth it.

I just think the Contax looks beautiful. The images have a very pretty look.

That’s not to say the Pentax is a bad option. At 1/3 the price, and with better AF, I feel like the Pentax is a great option, especially if you’re new to this. If you’re trying to get into film and get into the medium format world, the Pentax it’s super affordable, and it’s one of the newest medium format film cameras you can buy. I’ve seen them as low as $650 or $700 for the body.

The truth is, you can’t go wrong either way when it comes to these two cameras, it just depends on what your needs are. What do you want to spend it on? If image quality is king, consider spending the extra money on the Contax; if ease-of-use is more important, and budget it limited, the Pentax is a great option.