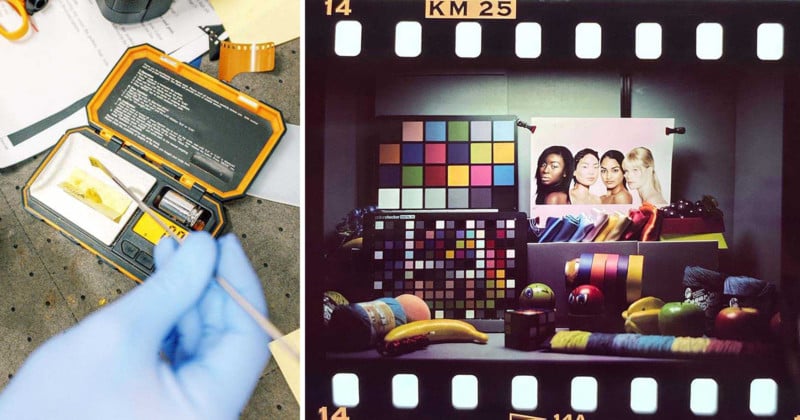 Last month, VSCO achieved a years-old dream of releasing a preset/filter that was based on Kodak’s iconic “Kodachrome” film stock. But creating the KC25 preset was anything but easy. In fact, it involved custom chemicals, custom hardware, and two years of experimentation to get this one right.

You see, when the folks at VSCO (formerly “Visual Supply Co.”) set out to create one of their film simulations, they usually start with the actual film. Just one problem: the last roll of Kodachrome was processed in 2010, one year before VSCO was founded.

“We had made some eyeballed attempts based on historical film scans, but releasing a film preset that wasn’t built from real film didn’t meet our quality standards,” explains Kyle Hale, Senior Product Operations Specialist at VSCO, in a blog post titled Reviving Kodachrome. “Thus, the desire to find a way to create a digital version of Kodachrome from developed Kodachrome film remained dormant in our minds.”

Then, in 2017, the mad scientists in the VSCO lab decided to pick up some expired Kodachrome off of eBay, throw it in their fridge, and begin the long and arduous process of re-creating the developing process in-house.

The main challenge with recreating Kodachrome isn’t so much getting the film itself, it’s the incredibly complex developing process involved in turning the film—which is actually a black and white emulsion—into the final product that produced such iconic and strikingly colorful shots as Steve McCurry’s Afghan Girl.

“The process to develop Kodachrome, known as K-14, involved approximately 14 steps to develop the film,” explains Hale. “This process was comparable to how an inkjet printer applies cyan, yellow, and magenta dyes to a piece of paper to form a final color image.”

Since the exact chemicals used in the K-14 process are no longer in production, VSCO had to create them in-house. What’s more, they had to develop a detailed, automatic, and consistent process by which to test their work so that they could iterate their way to success.

“Progress was slow and tedious, as each run of a small strip of film took hours to process by hand in the dark,” says Hale. “Because of the myriad of variables, we were only able to run about 10 tests a week.”

Initial tests “fell flat,” explains Hale. As mentioned above, the process is incredibly complicated and their first attempts produced images with low contrast and poor density in the film. But, as time went on and their formulas improved, so did their results.

“After months and months of iterations in our experiments and roll after roll of Kodachrome developing, we finally achieved results for Kodachrome that we were proud of,” writes Hale. “We achieved acceptable film density (Dmin and Dmax), acceptable overall color balance, and consistent results on the same batch of film.”

You can see the final results below—from dye tests, to the final product:

This is how VSCO ultimately achieved many a photographer’s dream: they can now successfully process Kodachrome film. It’s also how, 10 years after the last roll of Kodachrome was developed, the company was able to release its “KC25” preset based on actual Kodachrome that they actually developed in house.

To the uninitiated, two years of tinkering, creating custom chemicals, and building custom hardware might seem like a lot to go through in order to create a film preset. But when it comes to a film as iconic as Kodachrome, there really is no other way. Kudos to VSCO for doing something awesome.