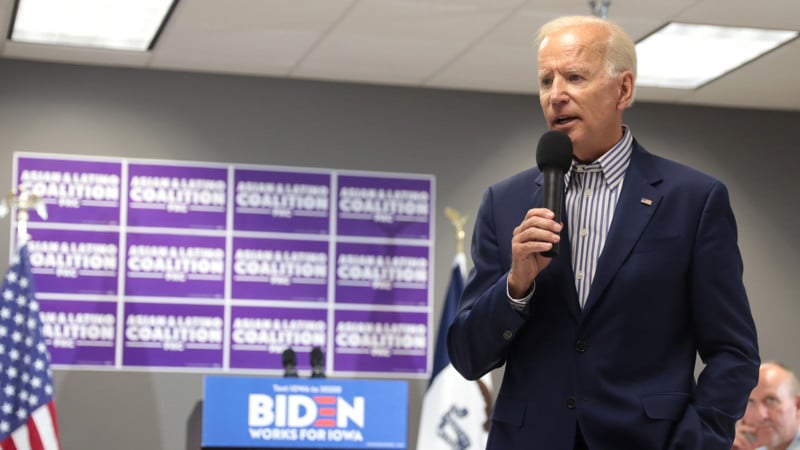 An unidentified press photographer managed to sneak past Presidential nominee Joe Biden’s security detail at an airport this weekend, getting as far as the press pool under Biden’s plane before the Secret Service forcibly removed him from the area.

The incident took place on Friday afternoon as Biden and his wife Jill boarded a charter plane at Johnstown-Cambria County Airport in Pennsylvania. That’s where the unnamed photographer got past the Secret Service perimeter surrounding the plane and attempted to join the press pool under the airplane’s left wing.

According to CBS, the photographer “either jumped a green, six-foot fence near the small terminal where a few dozen people gathered or entered the tarmac through an unauthorized pedestrian gate.” He then approached the plane, “which was surrounded on all sides by Secret Service agents, a more than eight-car motorcade and other local law enforcement.”

Photographer Bo Erickson, who is part of the protected press pool authorized to travel with Biden, witnessed the whole thing:

Secret Service squabble in PA w/Joe Biden: A photographer not with Biden’s protective traveling pool made it to under the wing at JST airport just now. He was quickly intercepted and taken away by agents.

The Secret Service shed more light on the matter in an official statement addressing the incident. Apparently, the photographer was credentialled for an event earlier in the day, and felt that this was enough to justify him gaining access to the tarmac… despite being told otherwise by law enforcement:

A member of the media who was credentialed for an event earlier in the day attempted to gain access to the airport tarmac for the departure of Presidential Candidate Biden. The individual encountered law enforcement, disregarded their instructions, and accessed the tarmac. U.S. Secret Service personnel apprehended the individual and escorted him from the area.

Fortunately nobody was harmed, and it’s unclear what (if any) consequences the photographer will face, but the breach is being taken very seriously given that the unauthorized man could just as easily have been carrying a gun instead of a camera.

Japan is Going to Send an 8K Camera to Mars

Why Photos of ‘Crowded’ Beaches May Not be What They Seem