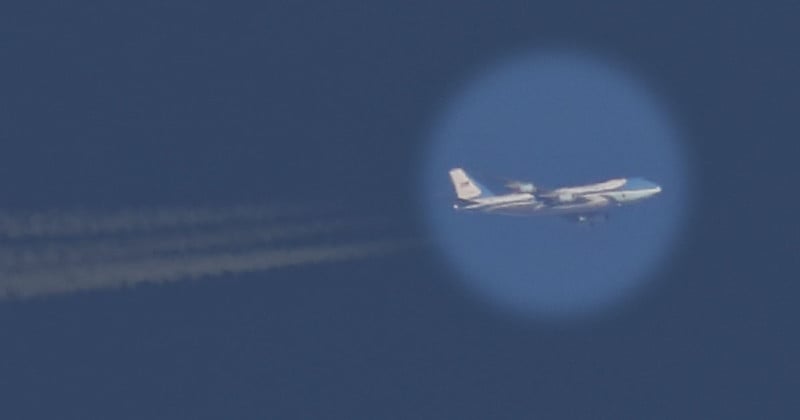 On Christmas Day, President Trump and first lady Melania made an unannounced flight to visit troops stationed in Iraq. But before the first news articles and official photos were published, one photographer in the UK had already accidentally uncovered the secret mission on social media.

CNN reports that amateur photographer and airplane enthusiast Alan Meloy was looking out his kitchen window the day after Christmas when he noticed a contrail coming towards him.

He then stepped outside, pointed his Canon 7D at the plane when it was about 25 miles away, and realized that it wasn’t an ordinary airliner.

“I literally stepped out, and I could see a trail coming towards me and thought let’s have a look at what’s on the end of that,” Meloy tells CNN. “And then I looked through the viewfinder and thought this is worth photographing, it’s not just a normal airliner. I was absolutely amazed when that came past… I knew it was one of the two VC-25s.

“I had no idea who was on it, in my mind I was thinking it must be someone pretty important.”

The Boeing VC-25 is the $325 million military version of the Boeing 747 that’s modified for transporting the president of the United States. Operated by the US Air Force, either of the airplanes will take on the call sign Air Force One when the president is onboard.

Here are two photos Meloy captured of the airplane as it flew by: Meloy then turned to the Internet to inquire about the plane, and his photos sparked a great deal of excitement. One of the main things that drew attention from plane trackers such as @CivMilAir was the fact that the VC-25 was flying under the call sign RCH358, or “Reach 358,” since “Reach” is used by the US military to refer to cargo planes.

People immediately began to speculate that it could be Trump flying on a secret trip:

In view of the coincidence of the "escape jet" SAM927 09-0015 following on behind, could this be Trump making a "hush-hush" visit to troops "out East"

Now, I'm not saying Trump is currently heading to the Middle East to visit troops. BUT…

There's been some interesting aircraft movements the last couple of days. Some I've already tweeted… And a VC-25A has been reported over the UK earlier today.

Just to add to the speculation. 😂 From one of the WH press pool…

'Good morning on this Fifth Day of the Partial Government Shutdown.'

'For those interested: No, as of five minutes ago, there was no Marine posted outside the West Wing.'

The mystery didn’t last long: just a few hours after Meloy captured and shared his photos, Trump landed at Al Asad Airbase west of Baghdad, met with troops for nearly three hours, and the mainstream media picked up on the visit.

.@FLOTUS Melania and I were honored to visit our incredible troops at Al Asad Air Base in Iraq. GOD BLESS THE U.S.A.! pic.twitter.com/rDlhITDvm1

“On Christmas Day, the normal 13-person press pool was assembled quietly and sworn to secrecy,” CNN writes, “a long-held tradition and agreement between the White House and Washington bureau chiefs that reporters won’t report on secret overseas trips until the White House deems it safe to report, either once the trip is almost complete or the President is wheels up back to the United States.

“As the buzz picked up on Twitter and it was becoming more apparent that Trump was heading to the Middle East, the secret embargo was lifted, and reporters struggling to get internet connections were finally allowed to file, confirming many ‘avgeeks’ suspicions of a secret presidential trip.”

Trump revealed that the secret mission had taken up to a month to plan and had involved stealing away under the cover of darkness into a completely darkened “pitch black” plane. Despite going to such lengths to keep the trip a secret, a sharp-eyed amateur photographer in the UK helped break the news of the visit hours before the rest of the world learned of it.

ProGrade Digital Unveils Dual SD Card Reader with Speed of Up To 1.25GB/s