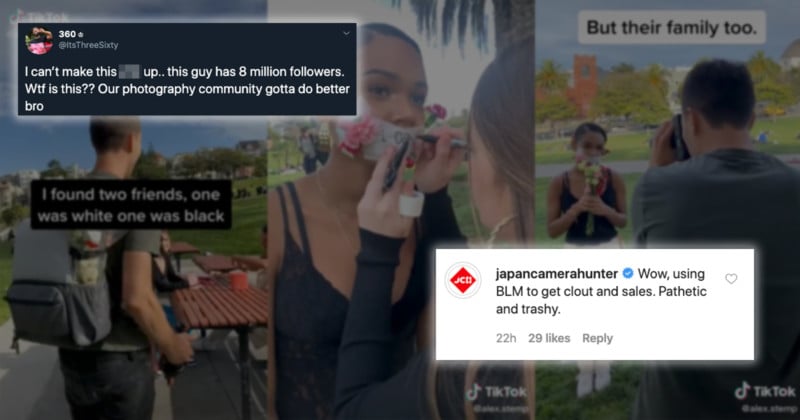 Popular TikTok photographer Alex Stemplewski is back in the news today, but it’s not because he interrupted another photo shoot. This time, he’s being called out for a ‘woke’ #blacklivesmatter photo shoot that many see as exploitative, calling it ‘humiliating’ and ‘disgusting.’

The controversial photo shoot was sent to us by multiple readers and industry friends over the past 24 hours, all pointing to the viral tweets below by photographer @ItsThreeSixty. “I can’t make this sh*t up.. this guy has 8 million followers,” reads the first tweet. “Wtf is this?? Our photography community gotta do better bro.”

I can’t make this shit up.. this guy has 8 million followers. Wtf is this?? Our photography community gotta do better bro pic.twitter.com/Oo9wmAxUbD

ItsThreeSixty is referencing a BTS video posted to Stemplewski’s TikTok, in which he finds two young girls—one is black, the other is white—and convinces them to model for him in order to “raise awareness for #blacklivesmatter.” But while his intentions might have been positive, the response from the very community he was purportedly trying to support has been anything but.

“This sh*t ain’t no joke. This ain’t fun and games dog,” writes @ItsThreeSixty in a followup Tweet. “This is humiliating to say the least . This man is legitimately trying to capitalize off of what we are going through. It’s pretty fu**ing obvious … I’m truly disgusted …”

Most of the additional replies seemed to agree, with one user pointing out that Stemplewski’s “good intentions” were further negated by the fact that he called out one of his sponsors for providing the smoke bombs used in the photo shoot:

This man even shouted out his sponsor lol wowwww pic.twitter.com/IE5nSTcA6J

The tweet below seems to sum up the general sentiment from users on Twitter pretty well, calling the photo shoot “absolutely nauseating” and accusing Stemplewski of exploiting the BLM movement for clout and personal gain.

“Hey want to be a prop in my fake woke photos so I can exploit a movement for clout”. Absolutely nauseating. 🚮

Even some well-known names in the industry spoke out. Commenting on the Instagram post, Japan Camera Hunter called the photo shoot “Pathetic and trashy.”

The additional attention, however, seems only to have generated additional views. The video about this photo shoot, which is still live as of this writing, is up over 19 million views on TikTok… many more than Stemplewski’s content usually gets. And the photo series on Instagram has received over 44K likes and mostly positive comments from his followers:

While the photo shoot has been called everything from humiliating, to disgusting, to cringey—and the sponsor callout was obviously in bad taste—Stemplewski does go beyond simply “raising awareness” (and his profile) with this shoot, encouraging his followers to donate and giving them a financial incentive to do so.

The document in his Instagram bio contains links to several BLM charities and GoFundMe campaigns, and anybody who sends him a receipt of their donation to one of these organizations will receive that same amount in “credit” to spend on Stemplewski’s photography website.

A Cautionary Example of Lens Compression