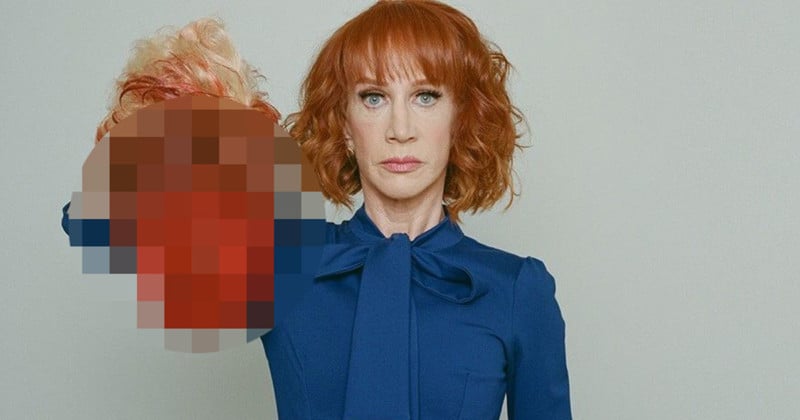 Emmy- and Grammy-award winning comedian Kathy Griffin and photographer Tyler Shields are in hot water this week due to a photo shoot showing Griffin holding a bloodied Donald Trump mask that’s made to look like the decapitated head of the president. The photo has sparked outrage and even a public response from Trump himself.

Warning: This post contains the graphic photo at the center of the controversy.

Shields is a well-known celebrity portrait photographer known for controversial and shocking photos, and the gruesome photo was first published yesterday by the celebrity news site TMZ.

“During the photo shoot, Kathy joked that she and Tyler would need to move to Mexico once the pics got released, for fear they’d be thrown in prison,” TMZ writes. “Trump’s critics have skewered him for inciting violence with his speech. Did Kathy do the same?”

Shields says the photo came about after Griffin (a friend of his) wanted to “do something political.”

“We didn’t kill anybody nor do I feel anybody should be killed,” he continues. “It’s no different from a movie. It just happens to be a still image.”

The photo immediately drew a strong reaction from the public, the media, and from famous figures. People from across the political spectrum have slammed Griffin, saying that she crossed the line.

This is vile and wrong. It is never funny to joke about killing a president. https://t.co/zIiuKoMyFw

Disgusting but not surprising. This is the left today. They consider this acceptable. Imagine a conservative did this to Obama as POTUS? https://t.co/QdghcbIjS7

For the record, I am appalled by the photo shoot Kathy Griffin took part in. It is clearly disgusting and completely inappropriate.

Trump himself tweeted today that Griffin “should be ashamed of herself,” saying that his children were disturbed by the photo:

Kathy Griffin should be ashamed of herself. My children, especially my 11 year old son, Barron, are having a hard time with this. Sick!

As outrage grew, Griffin quickly asked Shields to take down the photos and apologized publicly for the shoot, saying that she “went too far” with it.

I am sorry. I went too far. I was wrong. pic.twitter.com/LBKvqf9xFB

“I sincerely apologize,” Griffin says. “I went way too far. The image is too disturbing. I understand how it offends people.”

How to Accurately Color Match in Photoshop

How to Retouch Environments Using Photoshop