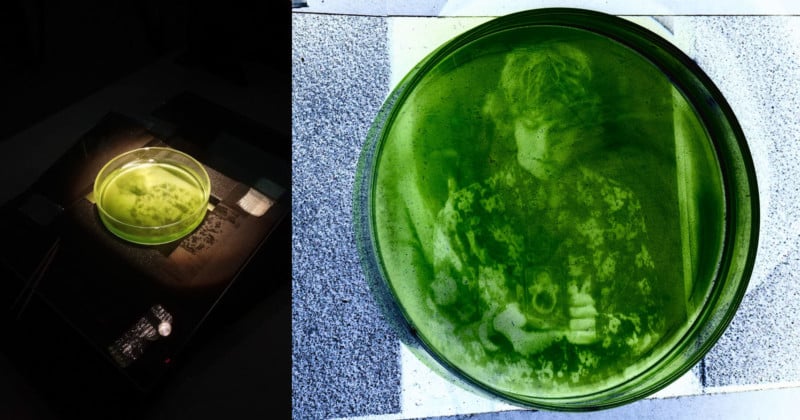 There are various mediums and techniques you can use to create prints of your photos, but have you considered using algae? That’s what photographer Russell Marx has been experimenting with, and the result is impressive.

Marx, a Ph.D. student in neuroscience, recently acquired an enlarger and began thinking of ways to use it for an interesting photo project.

“I’ve always liked biology, and inspired by microbial art, I looked for a way to merge photography and science,” Marx tells PetaPixel. “I recall a biology class where we put foil over leaves to make stamp patterns in the chlorophyll. So rather than bleaching unmasked chlorophyll, I came up with a plan to instead grow an image out of algae, which would give me a smoother and more uniform canvas and more control over contrast.”

Marx started by buying a couple of varieties of algae online to try out.

“A clear image will only form if the algae stays in place, so my first plan was to embed the algae in an agar gel so it wouldn’t float away,” the photographer says. “Luckily, one single cellular species (Chlorella vulgaris) was heavier than water and sank to the bottom of the dish, leaving a container of clear clean water with a dark green layer of algae on the bottom.

“This property allowed me to simply thoroughly mix the algae and water, let it settle, and put it under the enlarger without worrying about immobilizing it.”

Once the print medium was ready, things were moved to the enlarger, which Marx used to project a film negative image onto the Petri dish.

“Algae grows faster when it receives more light, so algae under a bright spot in the image multiplied faster, and thus became darker, inverting the negative and creating a green-tinted positive image,” Marx explains.

If you try your own hand at this project, you should try to find a glass Petri dish instead of a plastic one.

“I used plastic Petri dishes first attempt, but I ran into a problem,” Marx says. “Algae turns CO2 into oxygen through photosynthesis. It turned out that the plastic bottom of the Petri dish has an affinity of oxygen, so little oxygen bubbles started sticking to the bottom of the dish, leaving little holes in the image.

“I got around this by using a glass Petri dish, which is smooth enough so that bubbles never form, and the image comes out clean.”

While a typical enlarger exposure may run seconds or minutes, Marx used an exposure time of one week — that’s how much time it takes for the algae to grow enough for a strong image to appear.

Here’s what resulted from Marx’s first attempt in this ongoing project: 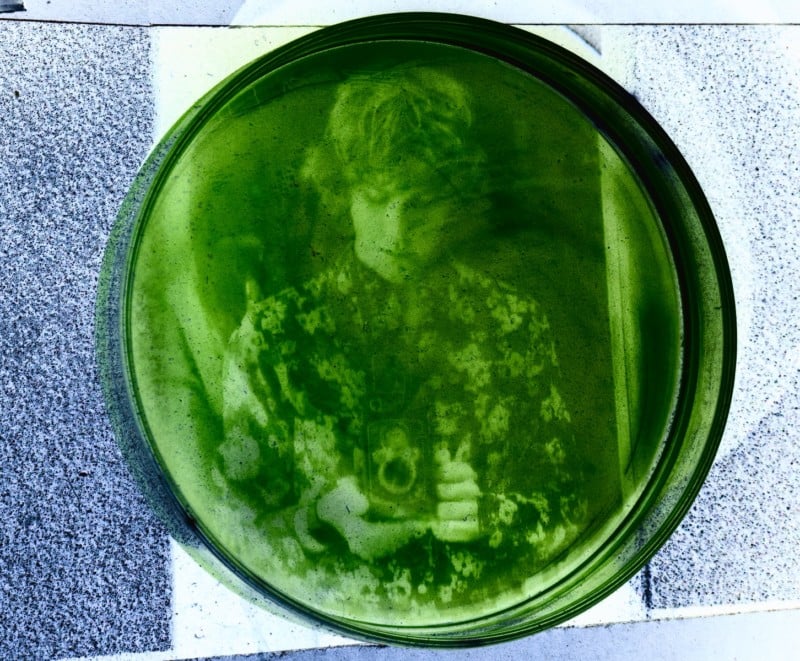 Once you have your print, you may want to “fix” it to give it more permanence.

“The final product is a thin film of algae in the bottom of a water-filled petri dish filled with water,” the photographer says. “It stays stuck to the bottom of the dish unless you tilt it too far, and I accidentally spilled my first print.

“If you’re careful, you can pipette out the water and pour in resin to preserve it.”

Update on 5/18/20: It appears that French artist and researcher Lia Giraud began pioneering this technique, which she calls “Algaegraphy,” about a decade ago. She has printed both portraits and landscapes on algae.

Image credits: Photographs by Russell Marx and used with permission

American Idol is Being Shot on iPhone Rigs During Lockdown