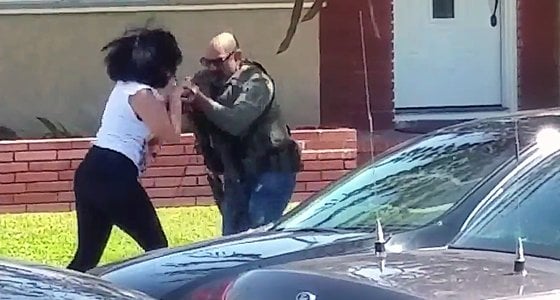 Yesterday we shared a startling video in which a woman who was pointing her smartphone camera at a group of law enforcement officers had the device snatched from her hand, smashed against the ground, and then kicked back at her. It turns out the man who did it is a deputy U.S. marshal, and the U.S. Marshals Service says it’s now investigating the incident.


The video quickly went viral and has been viewed by over 800,000 people around the world in the three days since it appeared on YouTube.

The woman, 34-year-old Beatriz Paez, was reportedly observing a multi-agency task force that was monitoring the gathering of a biker gang meeting in a residential area of South Gate, California.

Paez tells the Los Angeles Times that the officers noticed her with her camera and began backing toward her in order to “block her view.”

The woman stood her ground, telling the officers “You are making me feel unsafe, and I have a right to be here” and “You need to stay away from me, I don’t feel safe with you closer to me.” One of the officers then charged at Paez and destroyed her smartphone.

“It’s our responsibility to take care of each other,” Paez tells the Times. “It’s our constitutional right to film.”

The U.S. Marshals Service says it’s “aware of video footage of an incident that took place Sunday in Los Angeles County involving a Deputy U.S. Marshal,” and that it’s “currently reviewing the incident.”