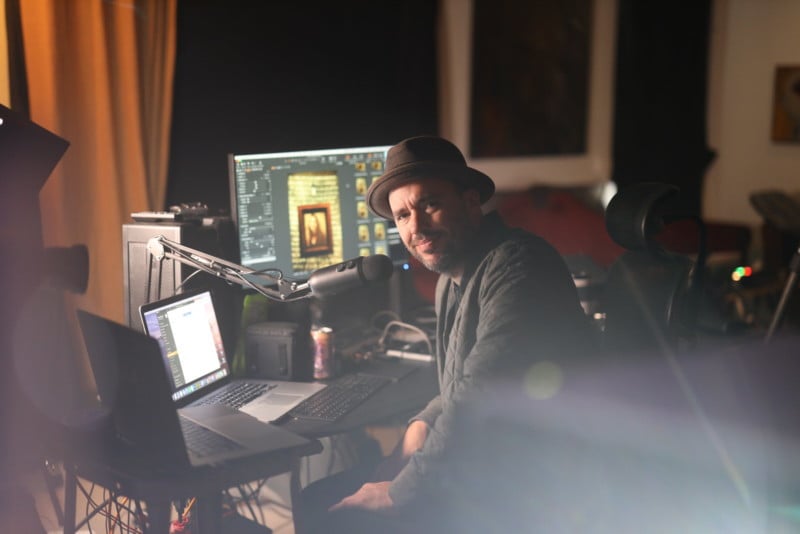 It was such a surreal feeling to be going into iCal and hitting the “delete” key over and over, also knowing that dollars were attached to each delete. I spent the full next week dropping into depression and boredom… just uncertain of literally everything.

Just when I was certain that I’d be spending the next few months in no man’s land, a few sparks of inspiration hit me, and it came from the photo community at large.

First it was other photographers doing front porch portrait projects (in their defense, this was before things got really bad and before our state had a stay-at-home order). Then I saw my friend John Keatley’s FaceTime portrait project — I was really inspired by John’s project and thought it was so well executed. Then I saw the way Alessio Albi was shooting fashion via FaceTime.

Hmmm… All of this was starting to bring me back to life in terms of motivation. But I didn’t want to rip them off or do the same things they were doing. I always want to do things my own way.

Thankfully I have a photo studio close to my house and I work alone anyway. I’m self-quarantined at work year-round, haha. So I drove to the studio and had an idea to make use of my amazing Canon projectors. I have two high-end 8K projectors (both are Canon WUX450STs) and I use them on nearly every single photoshoot I do in different ways. I absolutely love them and they’ve changed the way I work.

So I thought it would be cool to do Zoom calls with the public and photograph them in my studio. I have a friend that has an old woodshop in my building where he has tons of antiques. So I borrowed an old picture frame from him and brought it into my studio. Then I created a cardboard cutout so that only the projected video calls would land inside the picture frame. 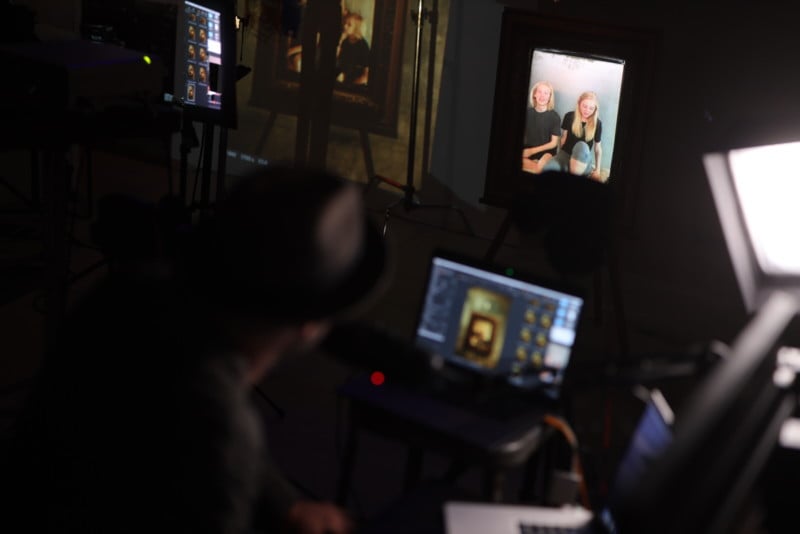 Then I used the second projector to project various textures and custom images onto a painted backdrop that @telicialee painted for me. That way I could change them as I’m shooting. But to use two projectors means you have to have two laptops, so I project with one MacBook Pro while I change backdrops with a second (and much older) MacBook Pro, using Adobe Bridge and Photoshop. 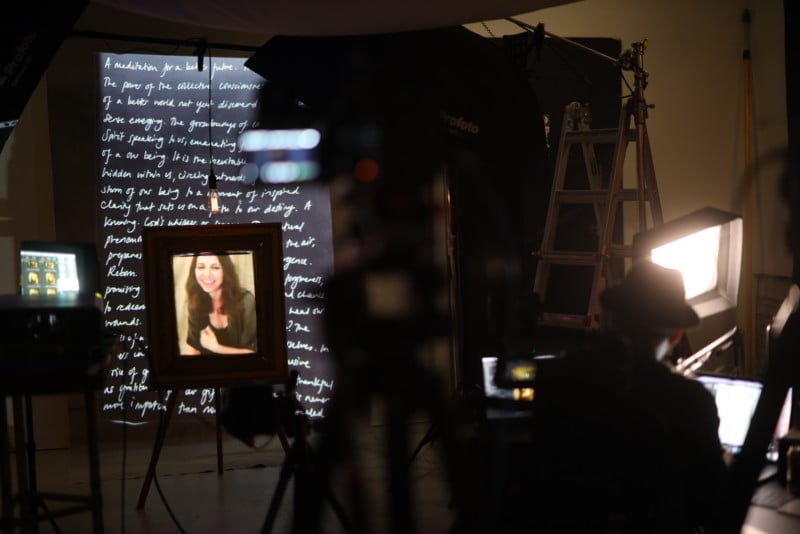 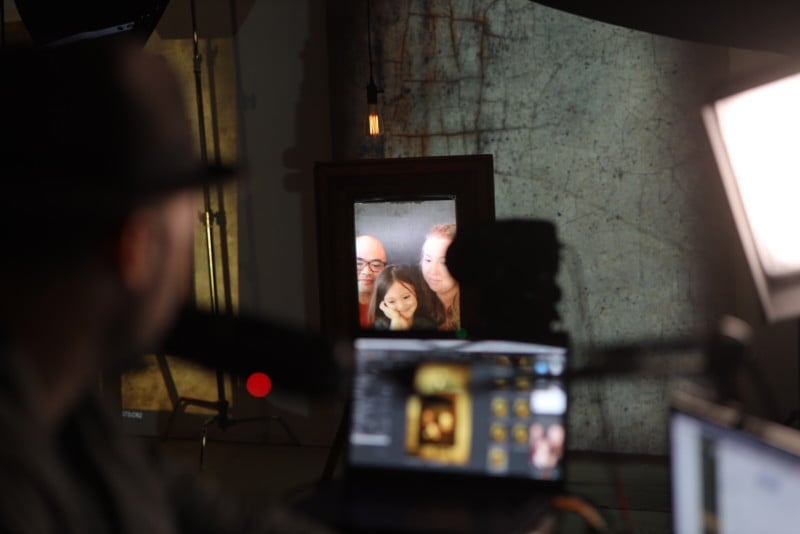 I light the backdrop with a Profoto D2 and a 3×4-foot softbox with a grid and another Profoto D2 that lights the picture frame itself. I tether to my MacBook Pro using a TetherTools cable and then I do all the editing in Capture One Pro. 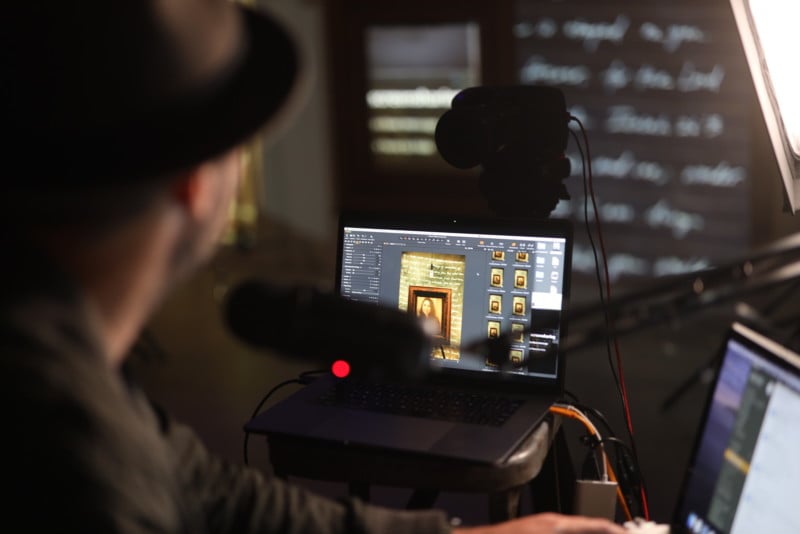 The camera (Canon 5DS with a 24-70mm f/2.8 lens) is locked down on a tripod so I can batch edit the entire shoot once the shoot is over. I then upload 100% of the high-resolution files to Pic-Time.com and send a link to all participants for high-res downloads.

Now here’s the fun part… I wanted to make money doing this. I wanted to stay profitable during this pandemic. My friend Derek Webb told me about some software called Crowdcast. It’s similar to Zoom in that it’s live video conferencing software except the public can buy tickets and you can make money.

I launched 3 events at 100 people per event for $10 apiece. Those all sold out in an hour. Then a few days later, I raised the price point again for only 40 people per event. Those also sold out. Fast forward to today. I’ve already done over 8 events and have photographed individuals, babies, families, and pets all over the world.

Each shoot lasts about 2-4 minutes and my assistant changes the camera screen to the next person waiting in line on Crowdcast. Keep in mind, my assistant is virtual, working from her apartment. Everyone I’m photographing is also virtual obviously, so I get to stay alone in my studio and do all this. Then I have also been live broadcasting these shoots to my Instagram, Twitter, and Facebook so the public can witness the process live for free and ask any questions.

I have one guy named Matt Voss who sits in the corner of my studio and runs the livestream. So there are never more than two people in my studio. Just Matt and I. 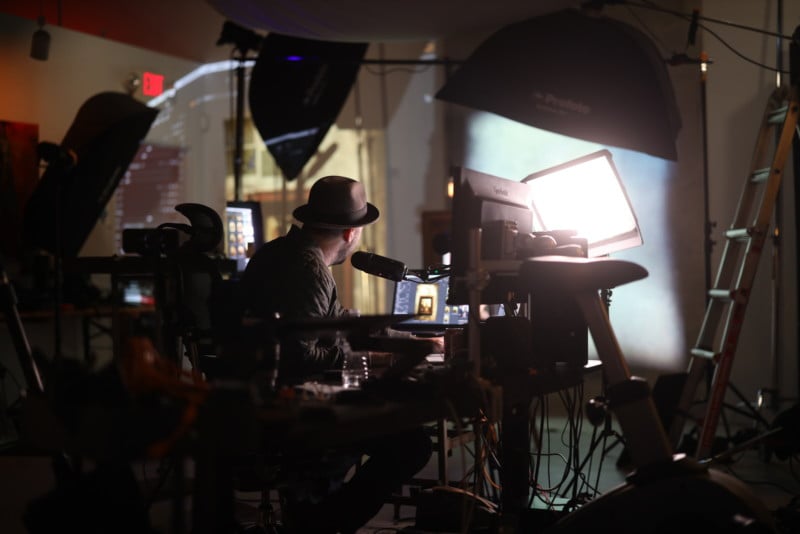 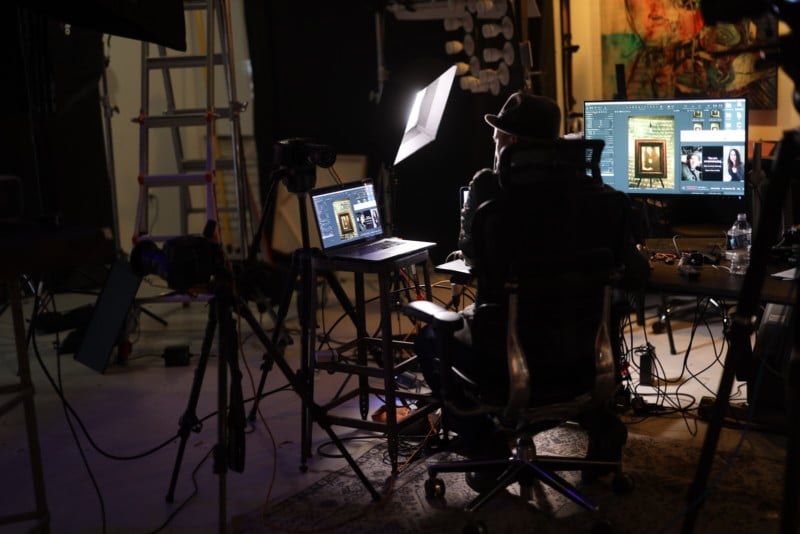 The result has been just beautiful. People are so grateful for a fun distraction. They love seeing the full process. They love having an excuse to dress up. It’s been a blast meeting so many new friends around the world. 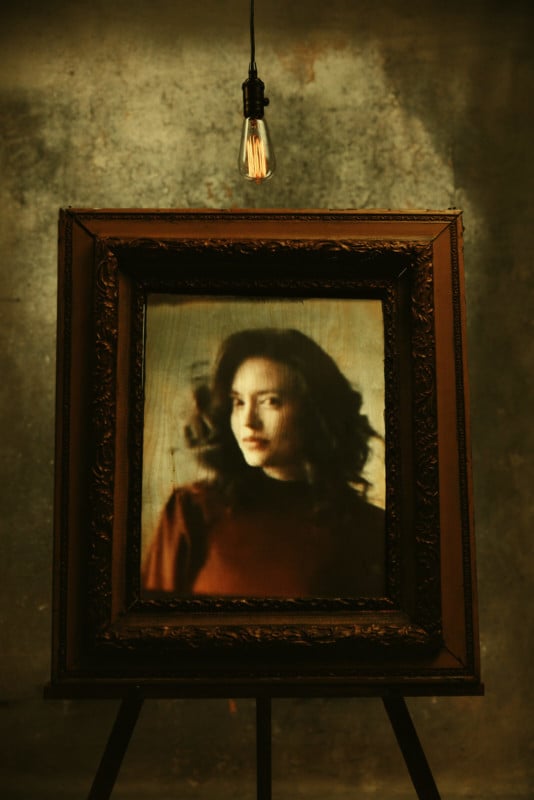 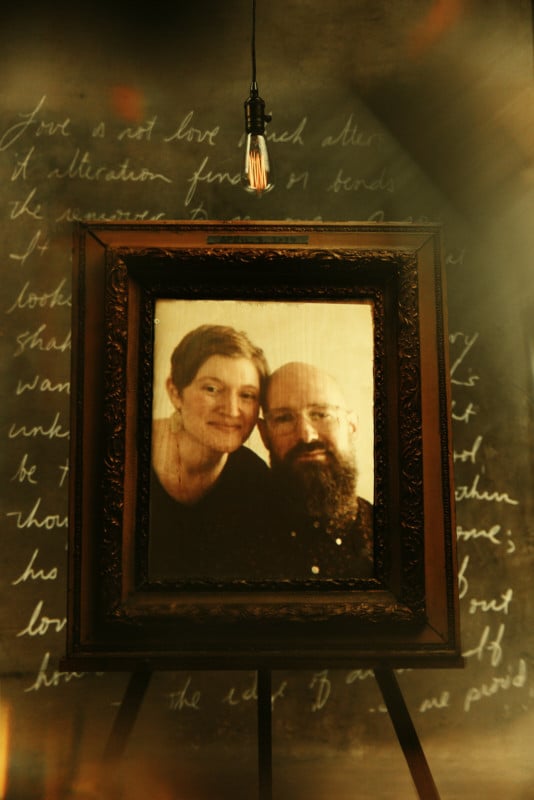 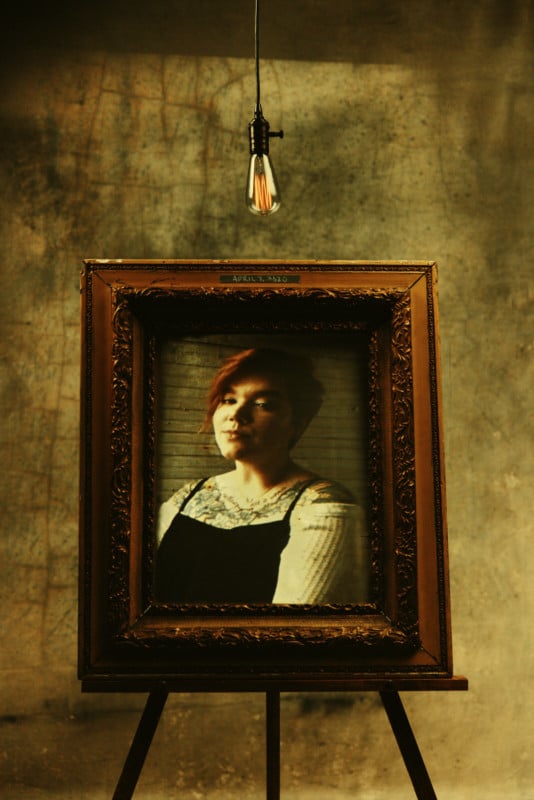 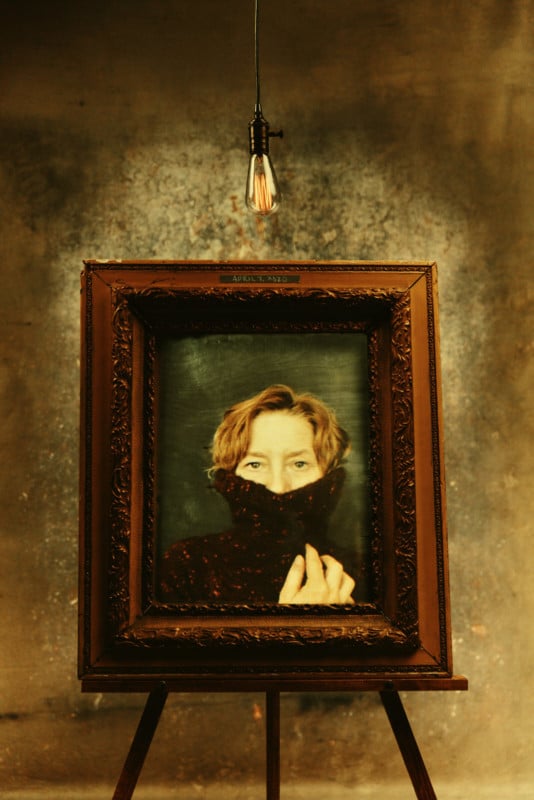 And listen, I understand that most photographers won’t be able to do this. I know most photographers don’t have access to a studio or fancy, high-end projectors, etc. But here’s the deal… maybe there is something you can all take from this process. Maybe you can still use crowdcast to charge money for tickets and photograph people via FaceTime like John Keatley is doing. I hesitated to write this because I know I have a lot of resources at my disposal. But I’m hoping this all provides maybe a little spark of inspiration, just like I so desperately needed 10 days ago.

P.S. Oh, one of the best parts is that a large percent of my subjects have been other photographers. So if I can photograph you and/or your family, signup here. I’d love to meet you!

About the author: Named the “Most Influential Photographer on the Internet” by Huffington Post, Forbes and Yahoo in 2014, Jeremy Cowart is an award-winning photographer, artist, and entrepreneur whose mission in life is to “explore the intersection of creativity and empathy.” The opinions expressed in this article are solely those of the author. Cowart has published four books and is a sought-after speaker, having presented at TEDx, the United Nations and creative conferences across the country. His latest endeavor is The Purpose Hotel, a planned global for-profit hotel chain designed to fuel the work of not-for-profit organizations. He’s the founder of a global photography movement, Help-Portrait, a mobile social networking app called OKDOTHIS, and an online teaching platform, See University. He lives in Nashville, TN, with his wife and four children, two of whom they recently adopted from Haiti. You can find more of Cowart’s work on his website, Twitter, and Instagram.

The Art of Selling Art: Partnering with Interior Designers to Sell Prints

The Cuteness of Antarctic Penguins