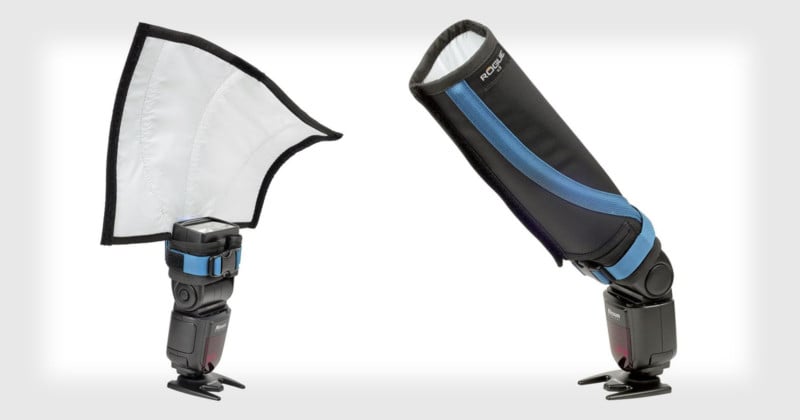 Rogue has announced the latest version of its FlashBender shapeable reflectors and softboxes. Version 3 features a number of improvements over the previous iteration, including improved grip and shapeability.

The FlashBender line is designed to be a flexible light modifier that doesn’t bog you down with weight or bulkiness. You can fold it up and pack it flat in your camera bag when it’s not in use.

Although version 2 was already compatible with a wide range of speedlights and strobes, the new grippier attachment strap in the v3 line now has a compatibility range of 6.75 to 17 inches (17cm-43cm), up from 7.5 to 9.75 (19cm-25cm). The strap is universally compatible with flashes across the whole spectrum of brands.

Attaching the FlashBender is now faster than before thanks to a new quick-release buckle.

There’s also a new internal mesh structure that allows it to hold its shape and position better than v2 products, though it does come at a cost of slightly increased weight (perhaps around 25%).

If you’ve never used a FlashBender before, the shapeability allows you to control both bounce direction and form — the product can serve as a reflector/gobo, snoot, softbox, and strip grid.

The Rogue FlashBender v3 is available now from the Rogue website in a number of sizes (Small, Large, and XL Pro) and kit combinations. Prices range from $40 for the small reflector all the way up to $120 for the pro lighting system (for the largest reflector, diffusion panel, and strip grid).

(via Rogue via DPReview)