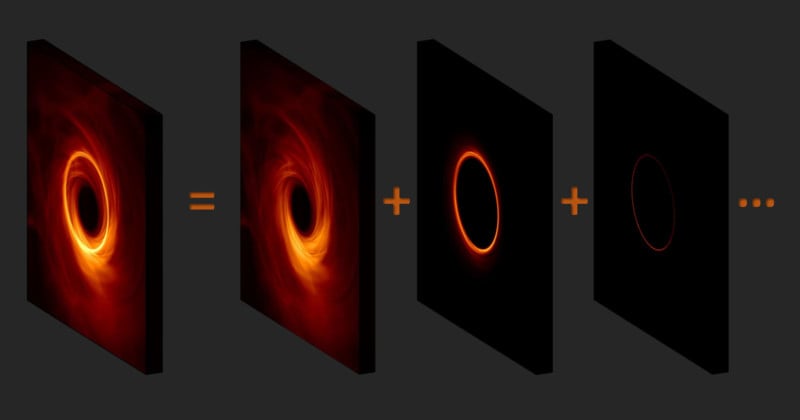 The world’s first photo of black hole was published back in April 2019, and scientists have been laboring to find ways to capture sharper images of the mysterious regions of spacetime. Scientists are now saying that focusing on a black hole’s “photon ring” may lead to a huge increase in sharpness.

In a new paper published in Science Advances, lead author Michael Johnson of the Center for Astrophysics Harvard and Smithsonian describes how the swirling ring of photons around a black hole could be the key to unlocking sharp photos.

“The image of a black hole actually contains a nested series of rings,” Johnson tells IFLScience. “Each successive ring has about the same diameter but becomes increasingly sharper because its light orbited the black hole more times before reaching the observer. With the current EHT image, we’ve caught just a glimpse of the full complexity that should emerge in the image of any black hole.”

The EHT that Johnson refers to is the Event Horizon Telescope, a collection of telescopes scattered across the globe that combine their observations to form what is essentially an Earth-size telescope capable of imaging black holes.

By stacking images of a black hole’s “subrings,” we may one day be able to create a much sharper complete photo of what a black hole looks like.

In addition to seeing its form, scientists will also be able to use the same data to figure out a black hole’s mass, size, and spin.

To capture photos of subrings, however, we’ll need a bigger telescope than the Earth-sized one we already have — we’ll need to expand the size into space.

“What really surprised us was that while the nested subrings are almost imperceptible to the naked eye on images—even perfect images—they are strong and clear signals for arrays of telescopes called interferometers,” Johnson tells Phys.org. “While capturing black hole images normally requires many distributed telescopes, the subrings are perfect to study using only two telescopes that are very far apart.

“Adding one space telescope to the EHT would be enough.”

(via Science Advances via IFLScience)

Meet the Artists Creating the Future of Storytelling