Last year, photographer and filmmaker Asif Islam of Asif Photography set out to capture an 8K timelapse that would show the impact of Light Pollution. So he travelled from one of the most light polluted places in the world all the way to one of the least, capturing every level of light pollution along the way. The result is an award winning timelapse called Where are the Stars?.

To create this compilation of 8K timelapses, Asif used the popular website darksitefinder.com to look up locations with every level of light pollution—from Los Angeles, CA on one end of the spectrum, to The Great Basin Desert on the other.

The whole endeavor was challenge, but a rewarding one. Despite the threat of bears, snakes and other wildlife when out shooting in the middle of nowhere completely alone, Asif says that he was “awestruck by the beauty of night sky at very less polluted areas.”

“Most of us live under heavily light polluted skies, and some people have never even seen the Milky Way. During a 1994 blackout, L.A. residents called 911 when they saw the Milky Way for the first time,” writes Asif in the video’s description. “We are losing our connection with the night sky, which provided us with wonders like Stonehenge, the Pyramids of Giza and the Mayan calendar. It also keeps our overworked, politicized lives simple, and makes us more kind, thoughtful.” 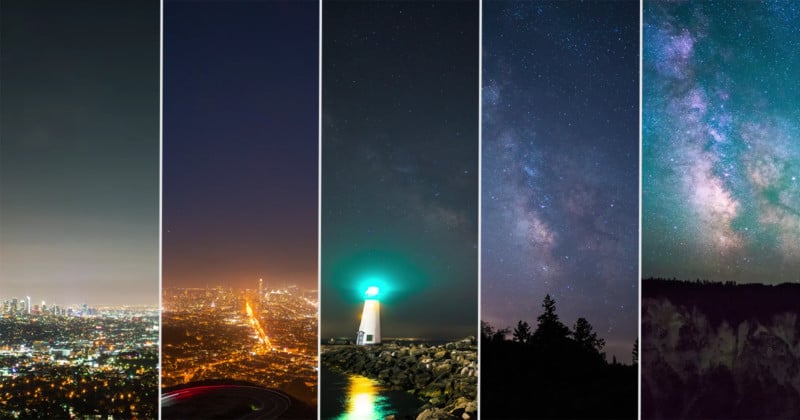 Asif goes on to point out that most of the light pollution we experience in cities comes from unnecessary, “wasted” light.

“Although we can’t imagine popular cities like L.A. and Manhattan almost dark upon nightfall, we can limit the light pollution specially the sky glow,” he explains. “Sky glow is the result of light directed upward instead of where it is most useful: on streets and homes. Thus most of a city’s artificial light is wasted anyway.”

Check out the full short film above to see the Milky Way revealed in darker and darker skies. And if you have any friends who have never seen the Milky Way with their own eyes, show them this video—who knows, you might inspire them to take a trip out to the desert.

Each of These Extreme Macro Mineral Photos is Made Up of Over 25,000 Individual Images