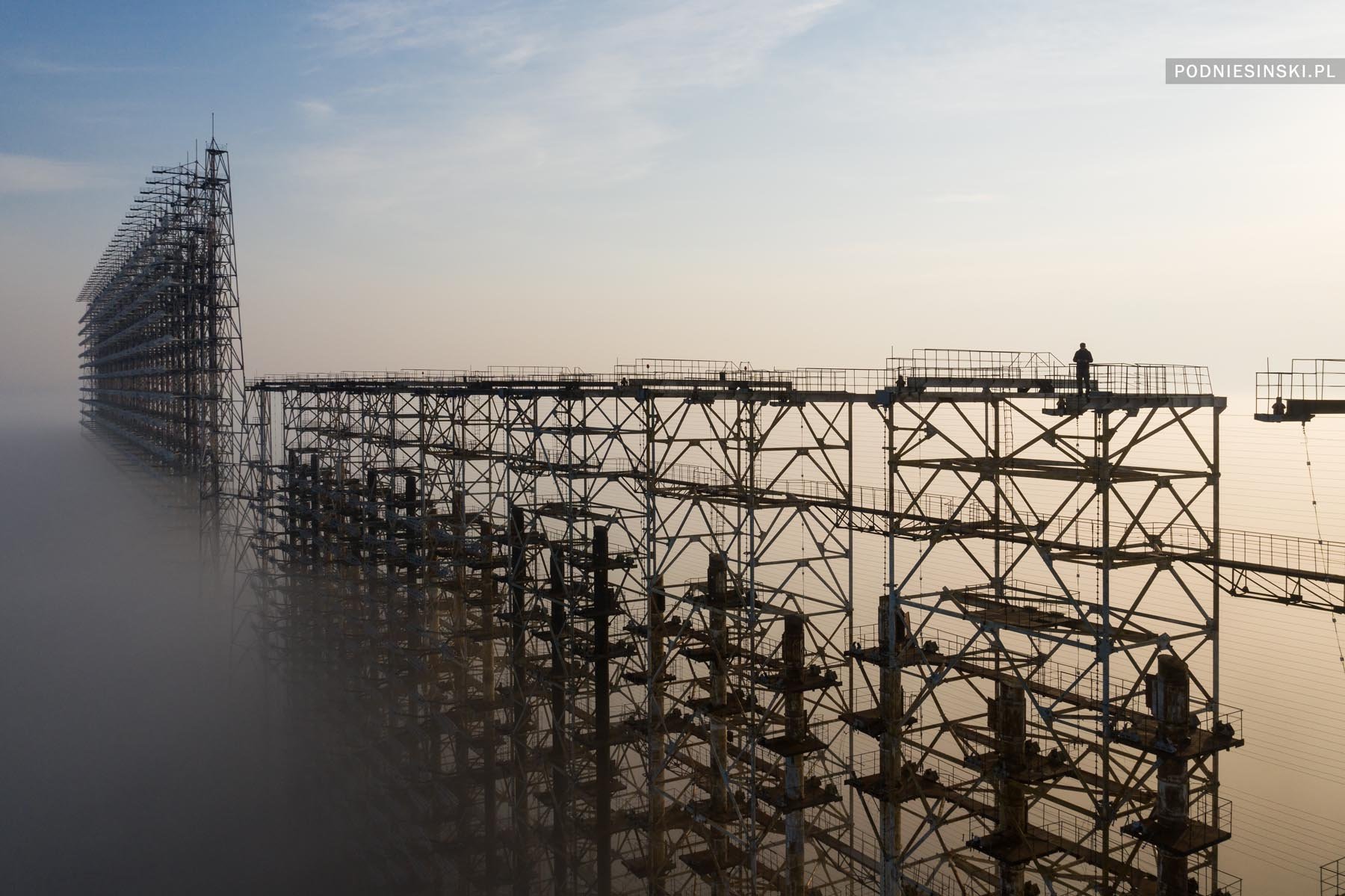 The DUGA over-the-horizon radar was one of the most important elements of the early warning system against an American nuclear attack on the USSR. More expensive to build than the nearby nuclear power plant, the complex consisted to two massive sets of receiving antennas located in Chernobyl and one transmission unit—which no longer exists—60km away in the town of Lubech-1.

The task of the radar was to detect the flight of ballistic missiles carrying nuclear warheads, which would allow for a rapid retaliatory attack before the US bombs could reach their intended target. The whole complex was closely guarded, and its existence kept secret.

The small town of Chernobyl-2 was constructed to serve the approximately 1,000 workers and their families and had all the necessary infrastructure: a school, kindergarten, hotel, cinema and even a sports field. Due to the fact that the USSR kept its military secrets, it is not known if the radar was effective or whether it contributed to the country’s defenses during the Cold War. It is known, however, that it stopped working as a result of the radiation from the Chernobyl disaster and was soon closed. 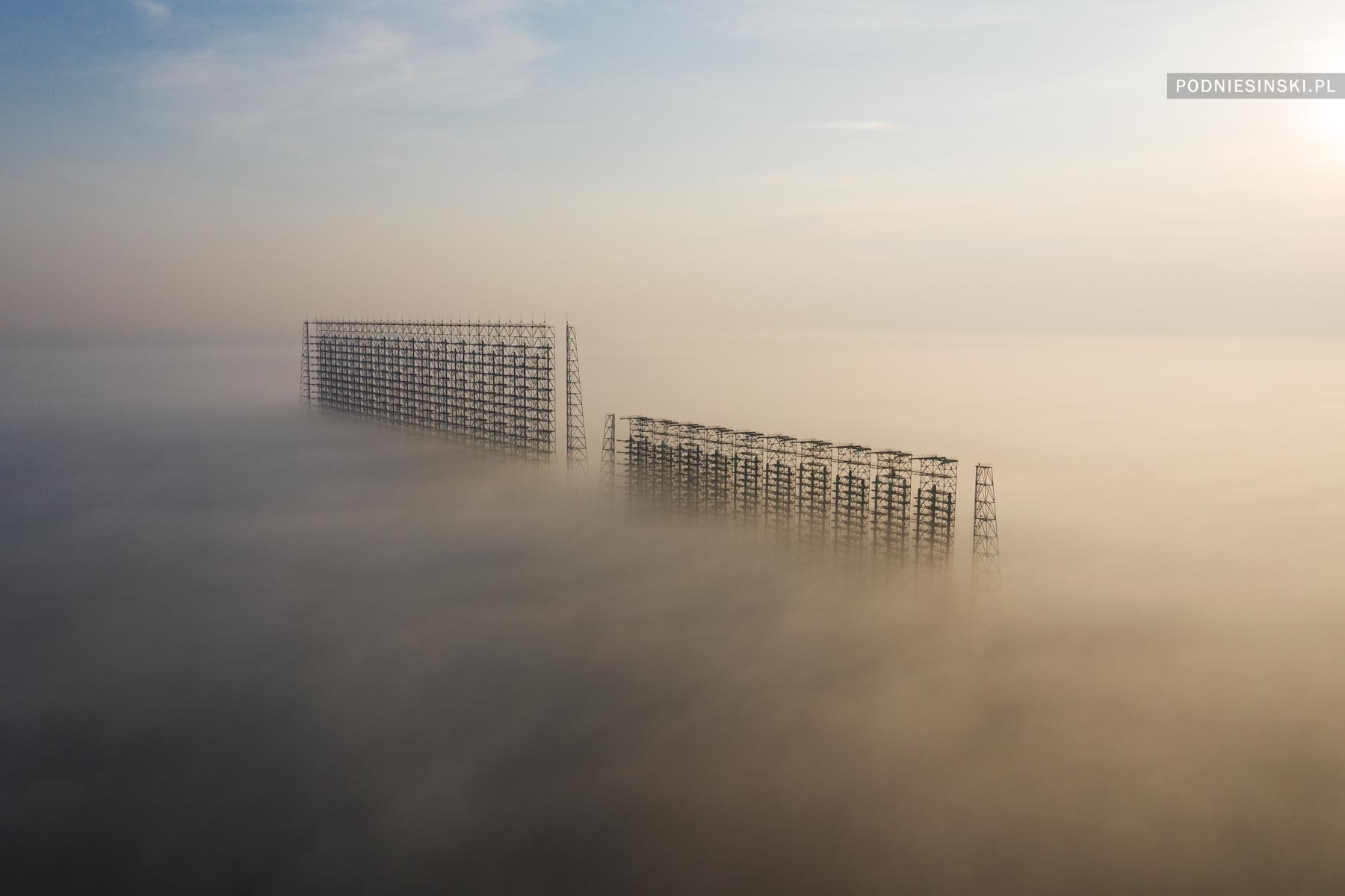 More than 30 years later, the antenna is still one of the largest constructions of its type in the world and a true masterpiece of mechanical engineering. It towers majestically over the entire area and is visible from a distance of dozens of kilometers. When I climbed to the top of DUGA nearly 10 years ago, I was probably the first to do so since the disaster. At that time, the entire complex was closed and closely guarded, so it was not an easy task.

Today, it can be visited by tourists, although for security reasons it is still forbidden to climb to the antenna. However, many daredevils ignore the ban, and one of them paid the ultimate price for it a few years ago.

It is a miracle that the antenna still exists. Almost all metal structures have been looted from the zone: ranging from the contents of the unfinished Unit 5 at the nuclear power plant, to thousands of vehicles used to liquidate the effects of the disaster, to countless radiators, pipes and other small objects. Weighing 13,000 tons, the metal structure is worth several million dollars, so there was never a shortage of those willing to make money quickly and easily. 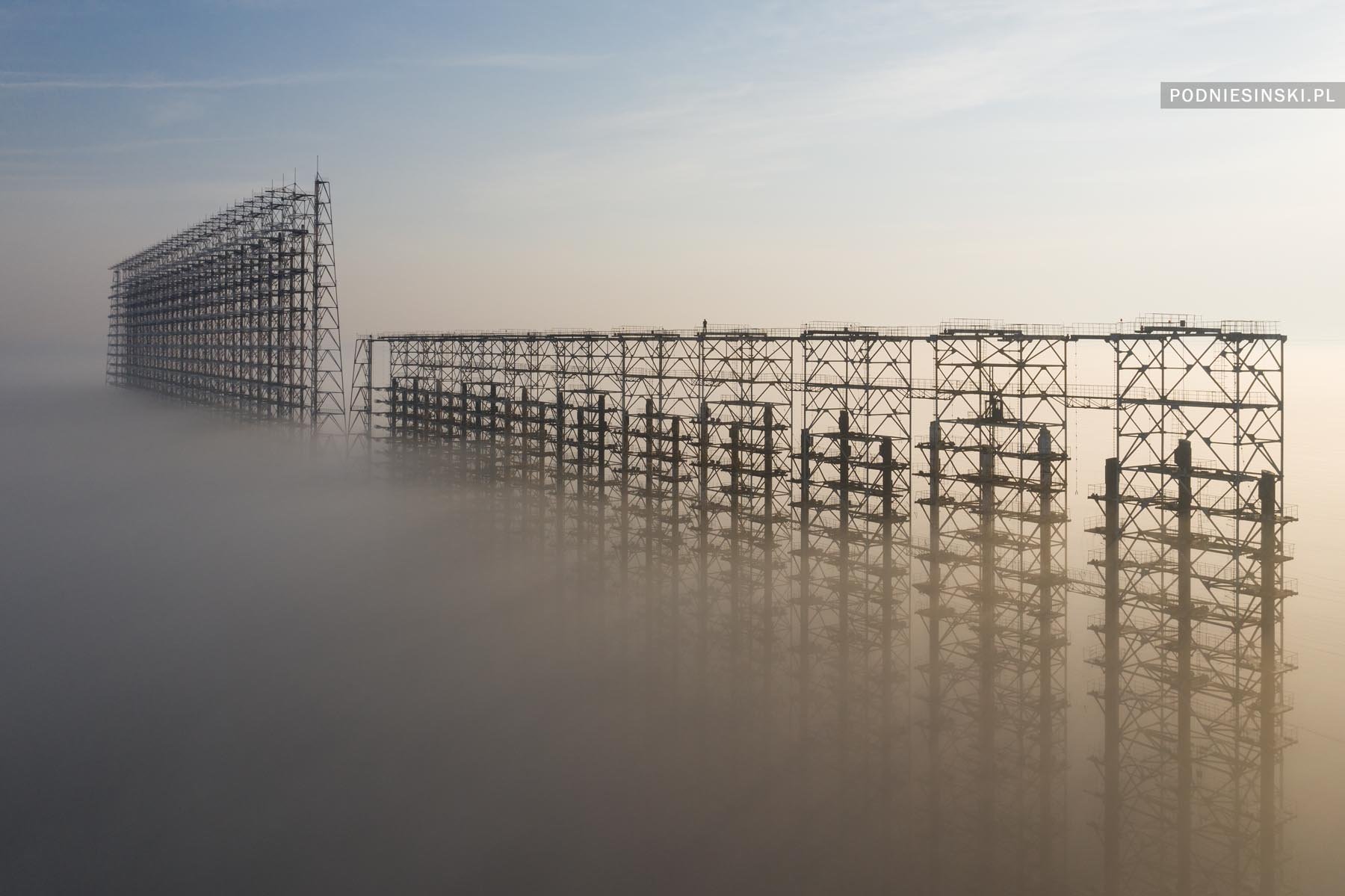 Some time ago, the idea of blowing up the antenna was discussed as it would be cheaper and easier to cut it into scrap metal later. DUGA’s enormous weight apparently was a roadblock — the shock from its collapse could threaten the nuclear power plant 9km away. A small auxiliary radar, known as the Circle due to its shape and located about 2km away, was not so lucky. Unguarded, it was quickly cut down and sold for scrap.

It was a close thing, but one of the two main antennas of the DUGA complex would suffer a similar fate because someone began cutting off its most valuable parts (dipoles), which are made of extremely expensive steel. It was a breakneck task. Thieves equipped with acetylene burners had to climb the 80-meter high structure and, without any protection, cut off the dipoles protruding from it. Some of them still lie at the foot of the antenna to this day, as if somebody frightened the thieves, who left them behind in their hurry.

Only the tallest (135m) antenna has withstood the destructive actions of the metal thieves. But for how much longer? 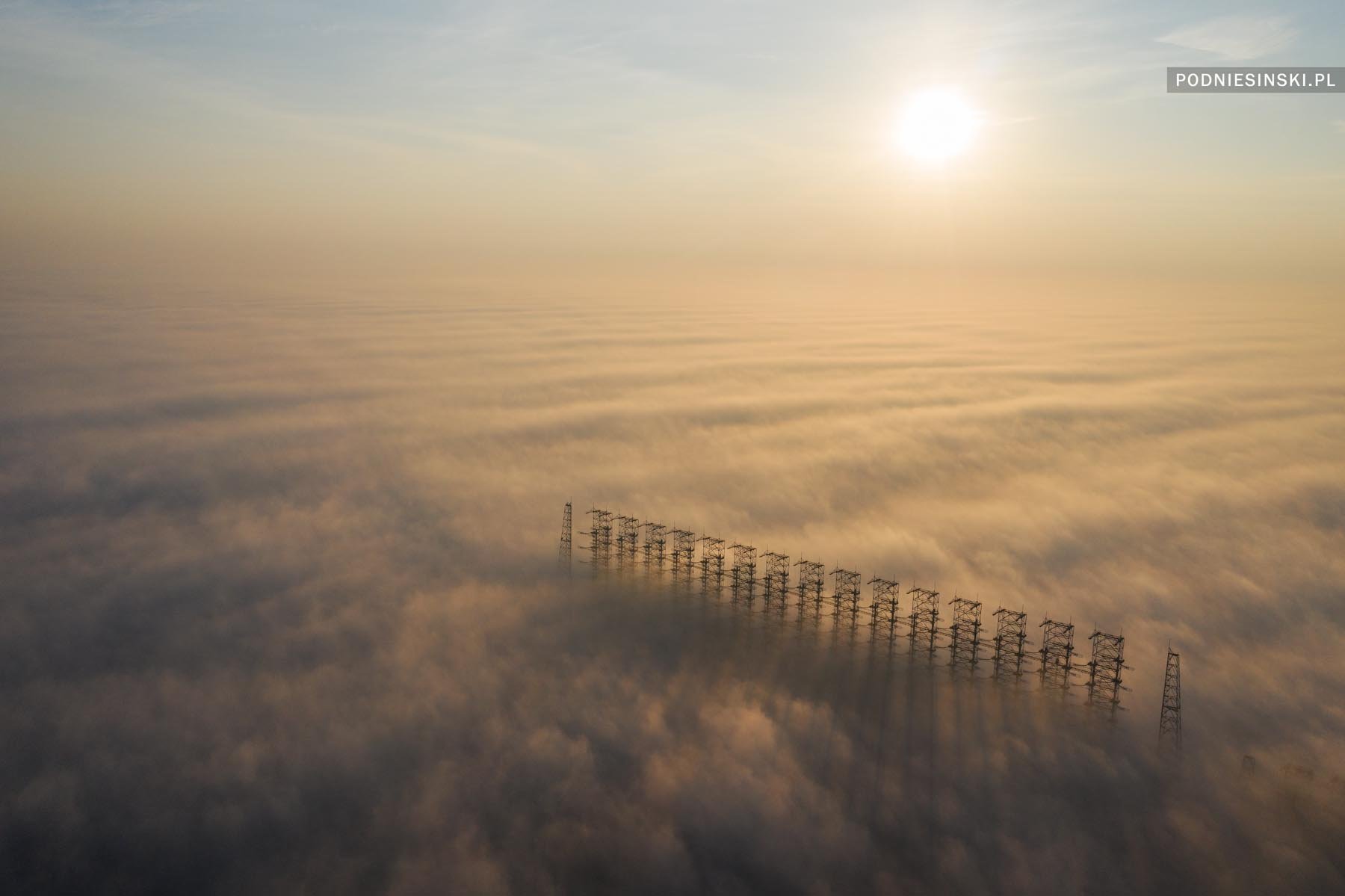 When I took the first aerial photographs of the antenna 8 years ago, I had to use a helicopter, a real Soviet Mi-2. Today, a drone is enough.

I tried many times until I finally succeeded. The weather was perfect: the clouds were thick and low enough. You only have to climb to the top of the antenna and start from there, then land. It’s not easy, since at the top there are usually very strong winds and there is very little space. All of this done to avoid getting the lens wet when flying through the clouds, which would have destroyed all my efforts. 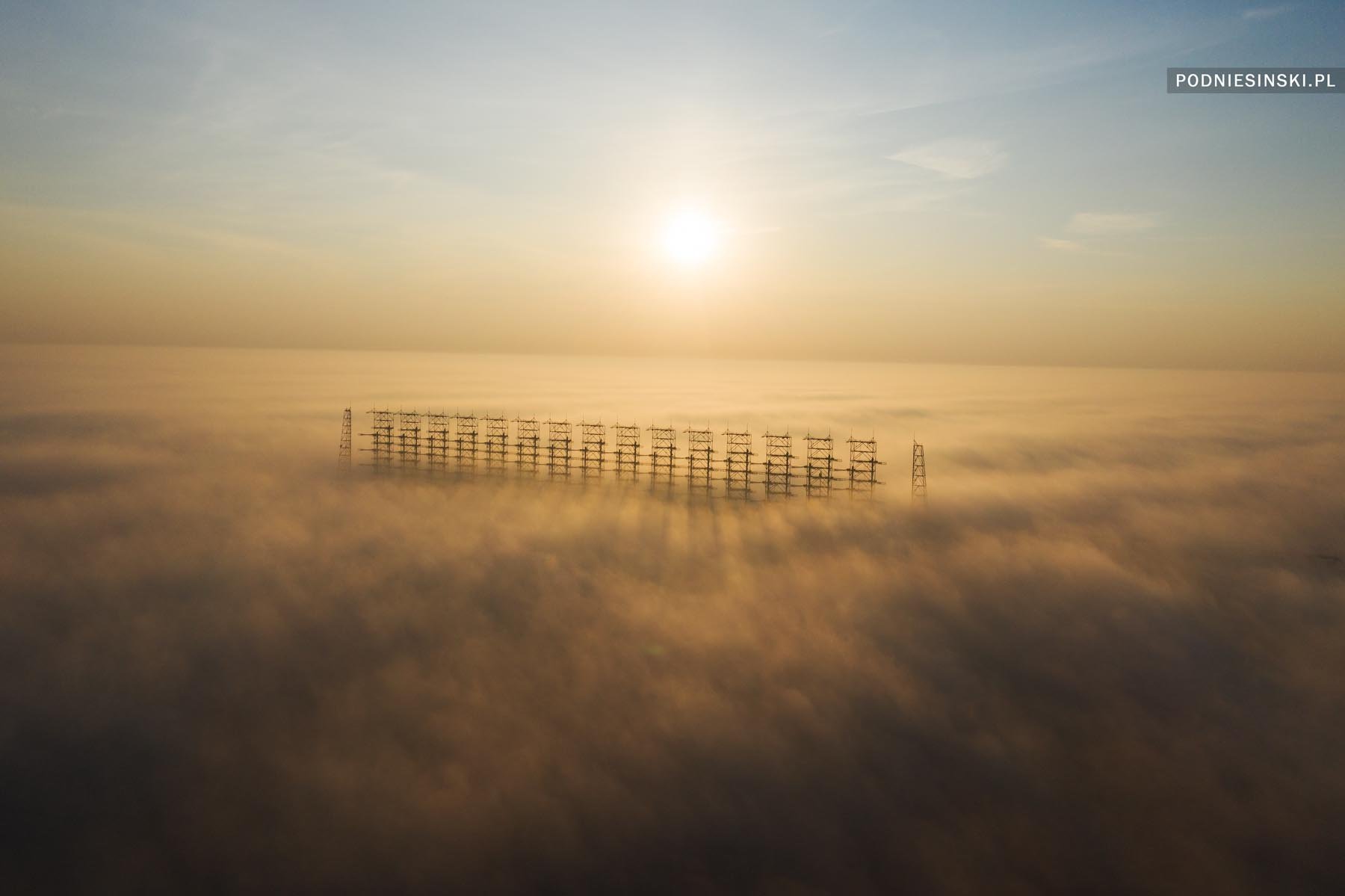 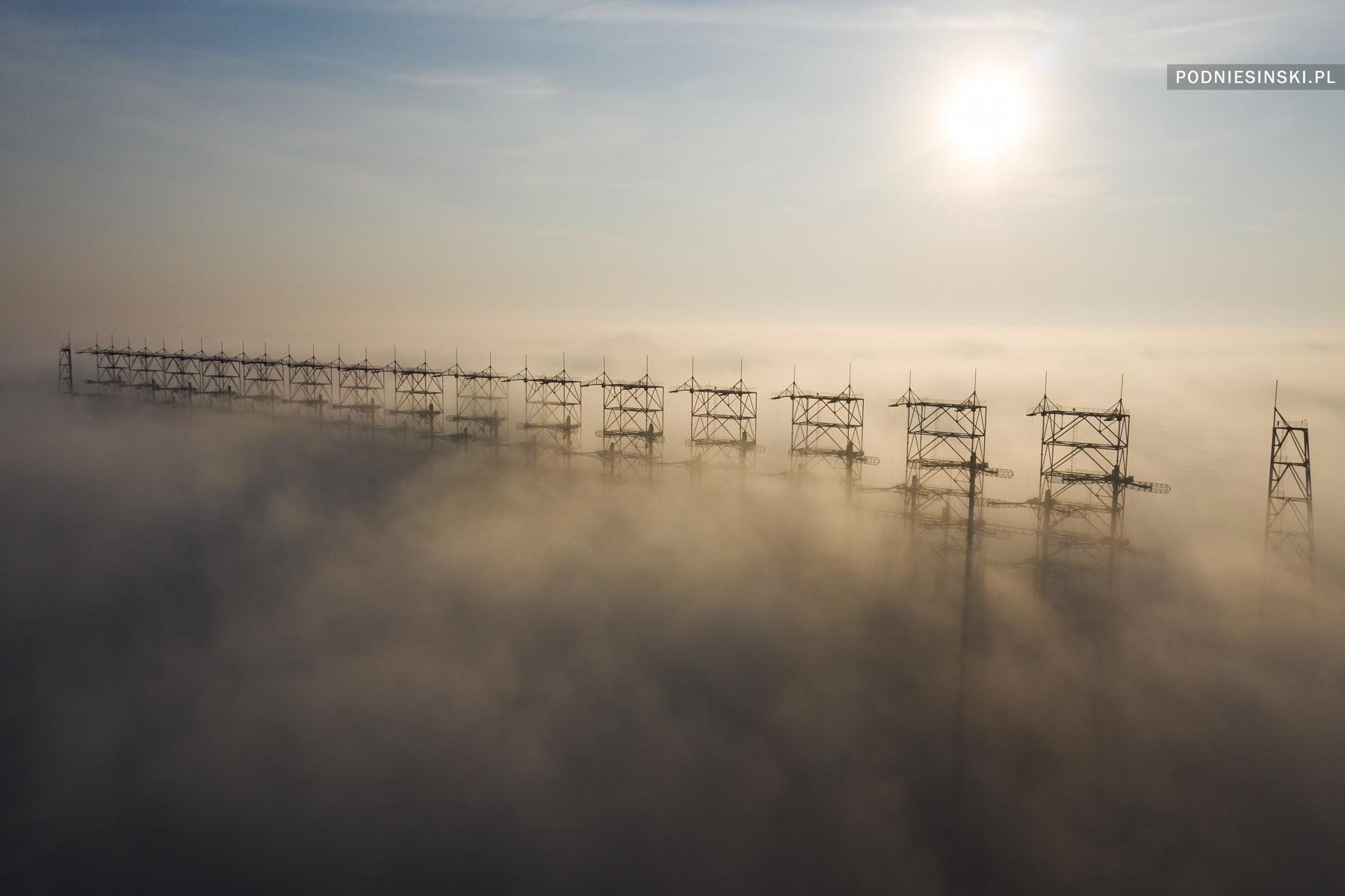 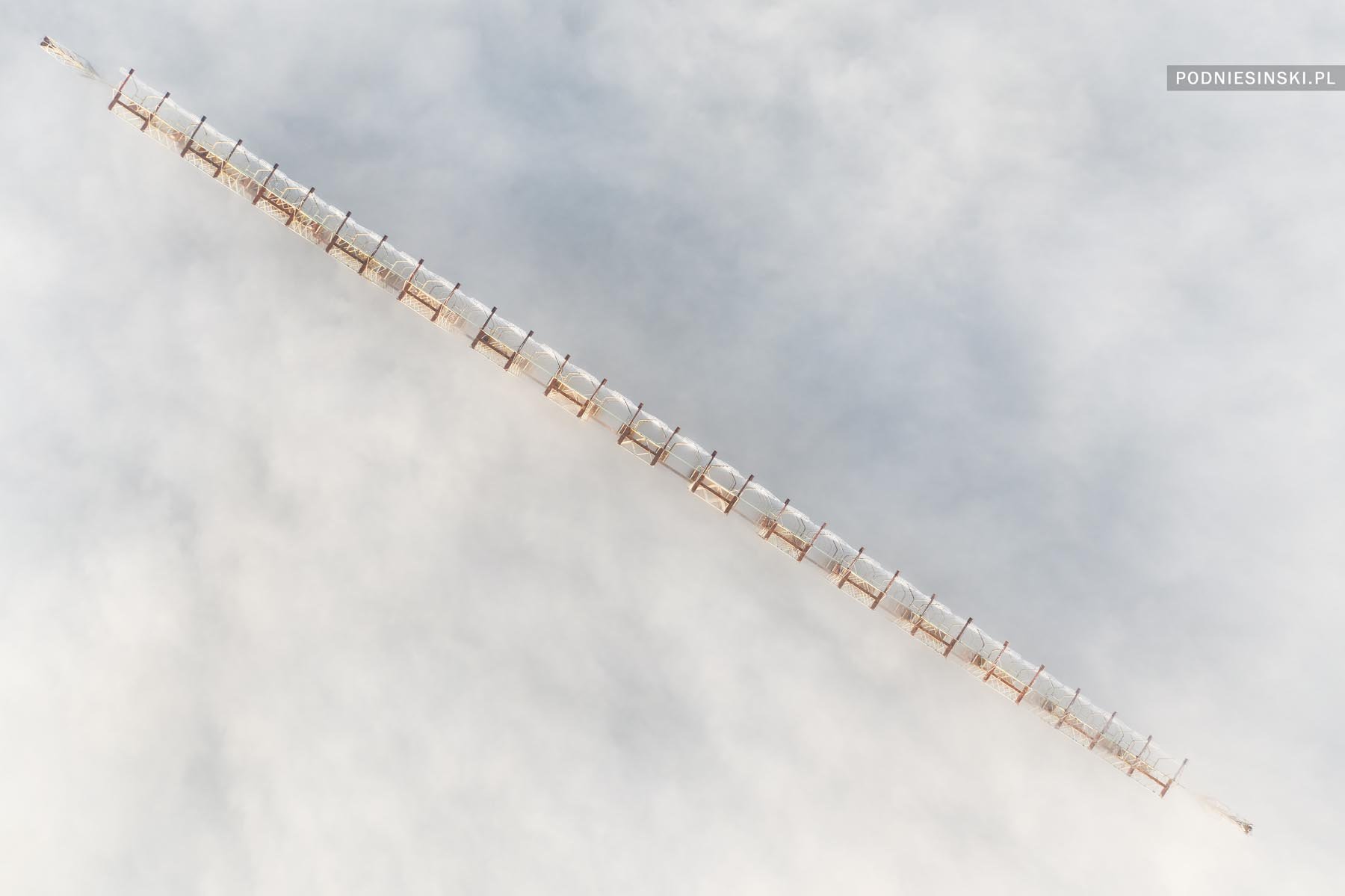 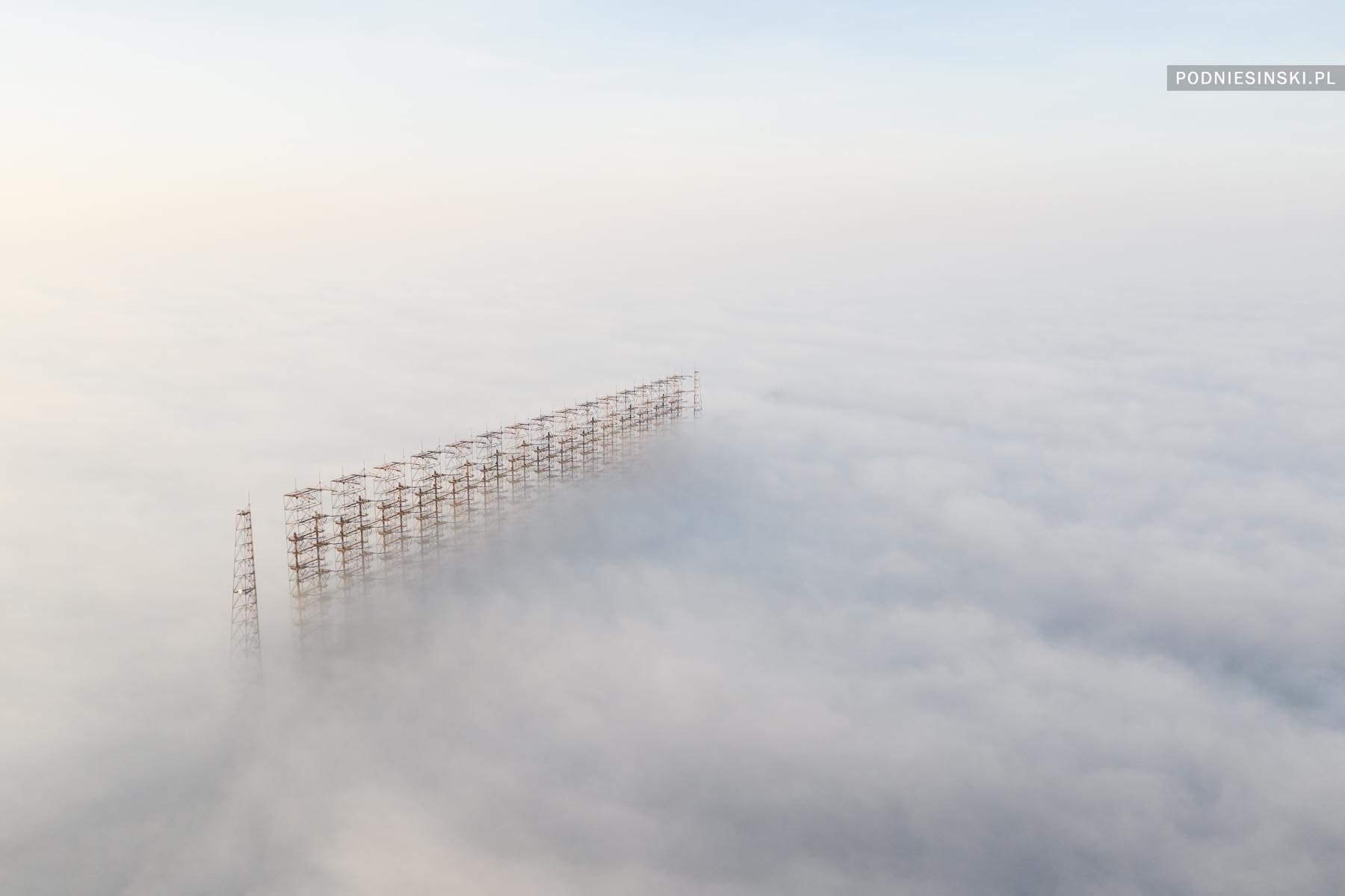 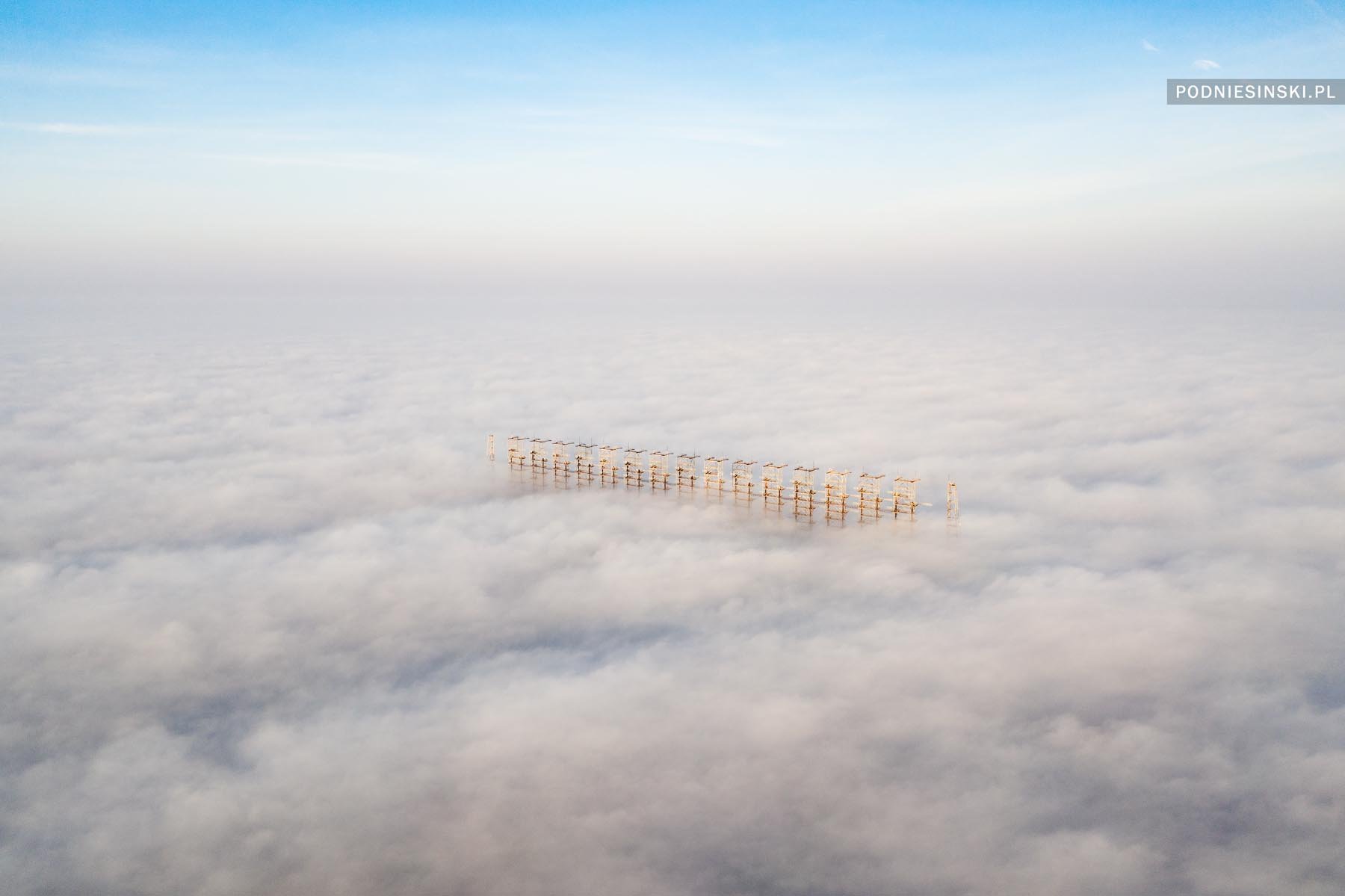 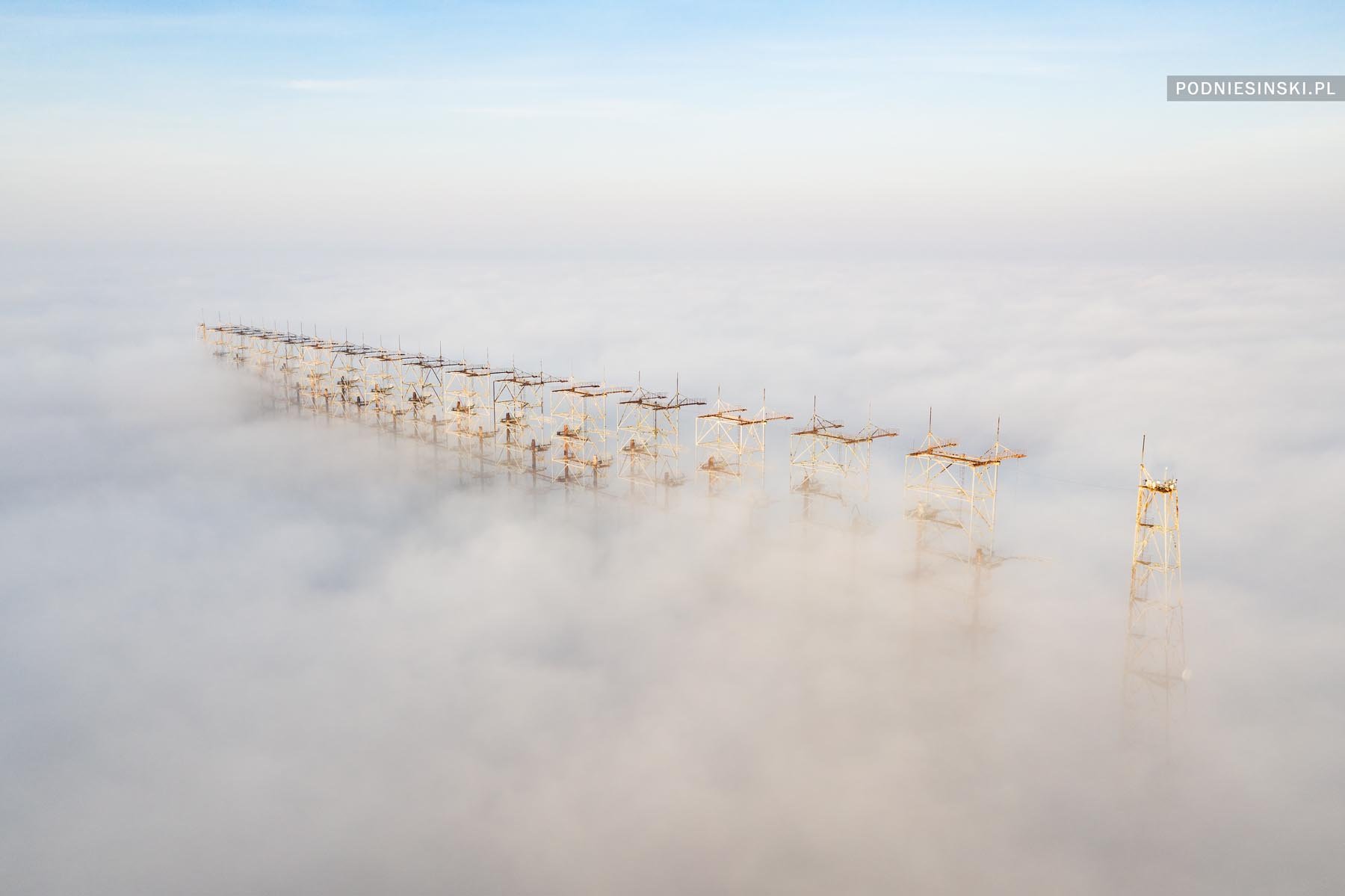 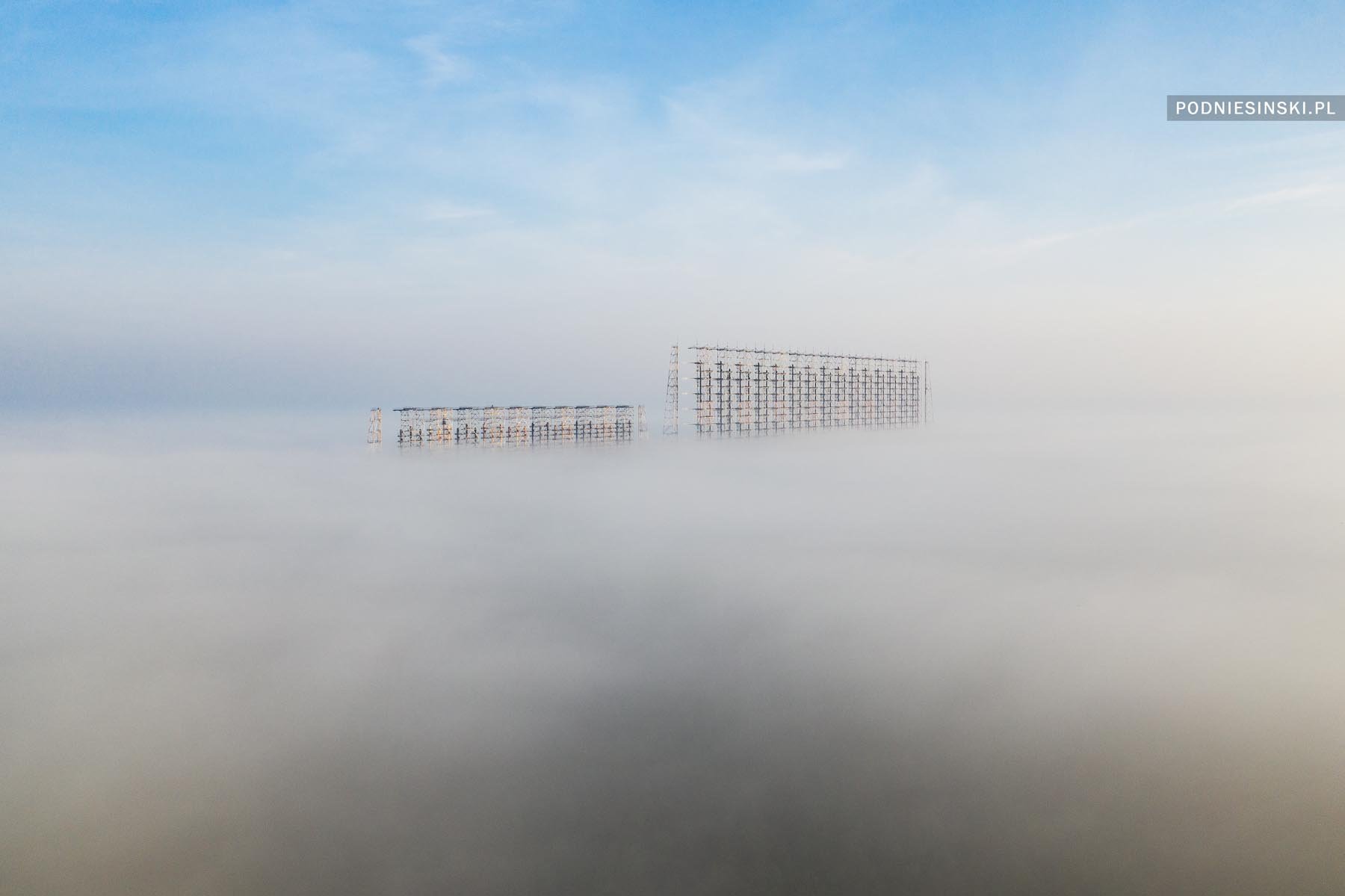 P.P.S. For anyone interested in the extraordinary history of the radar, check out this report from one of my previous trips where you will find more information and photographs.

About the author: Arkadiusz Podniesiński is a Polish photographer and filmmaker, a technical diver, and a graduate of Oxford Brookes University in Great Britain. You can find more of his work on his website. This photo essay was also published here.