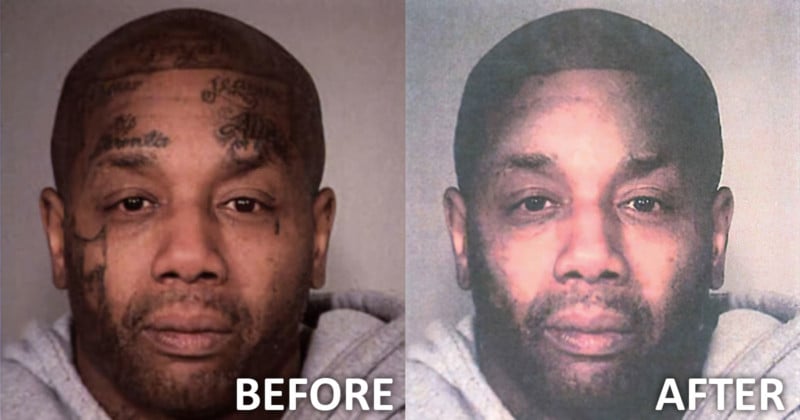 Police departments aren’t often accused of unethical Photoshop manipulation, but that’s the controversy that has erupted in Portland, Oregon. The police were discovered to have Photoshopped a suspects mugshot to make his face look more like the perpetrator in a bank robbery.

The Oregonian reports that after a series of four bank robberies, the Portland police arrested a man named Tyrone Lamont Allen in connection with the crimes.

Problem was, Allen’s face has prominent tattoos on his forehead and right cheek, but none of the bank tellers reported seeing tattoos on the face of the robber. What’s more, surveillance cameras didn’t catch any tattoos either.

Believing that Allen could have used makeup to cover up his tattoos, the police department made the decision to Photoshop Allen’s face and digitally erase all of his facial tattoos.

This decision was slammed in federal court last week by Allen’s lawyer, who argued that the Photoshopping allowed police to “rig the outcome” of the investigation, The Oregonian reports.

When police presented a photo lineup to bank tellers and asked them to identify the robber, some of them picked out Allen, but none of them were informed that Allen’s face had been manipulated.

Changes made to the photo weren’t documented in any report, and Weber says he has altered other suspect photos in past photo lineups.

“The whole idea was to make Mr. Allen blend in – so his photo wouldn’t stand out,” says Assistant U.S. Attorney Paul Maloney in defense of the police department’s decision. “These procedures were prudent. They were appropriate.”

But as you might expect, others are incredulous at the idea of using Photoshop to alter a suspect’s face.

“It’s unbelievable to me that police would ignore the fact that no teller has described a person with glaring tattoos and make this man into a possible suspect by covering them up,” Temple University law professor and eyewitness testimony expert Jules Epstein tells The Oregonian. “They’re increasing the risk of mistaken identity.”

“This is a very, very slippery slope given the advent of technology,” says Allen’s lawyer Mark Ahlemeyer in asking the judge to toss the witness identifications. “We don’t know where this may end.

“It is hard to fathom any photo array conduct that is more ‘suggestive’ than altering a source photograph for the sole purpose of making the investigation target look more like the perpetrator.”

This case is now closely being watched, as the judge’s decision may have a wide-reaching effect on how police departments around the country handle suspect mugshots for photo lineups.

A Look at ‘Migrant Mother’, An Iconic Photo of the Great Depression