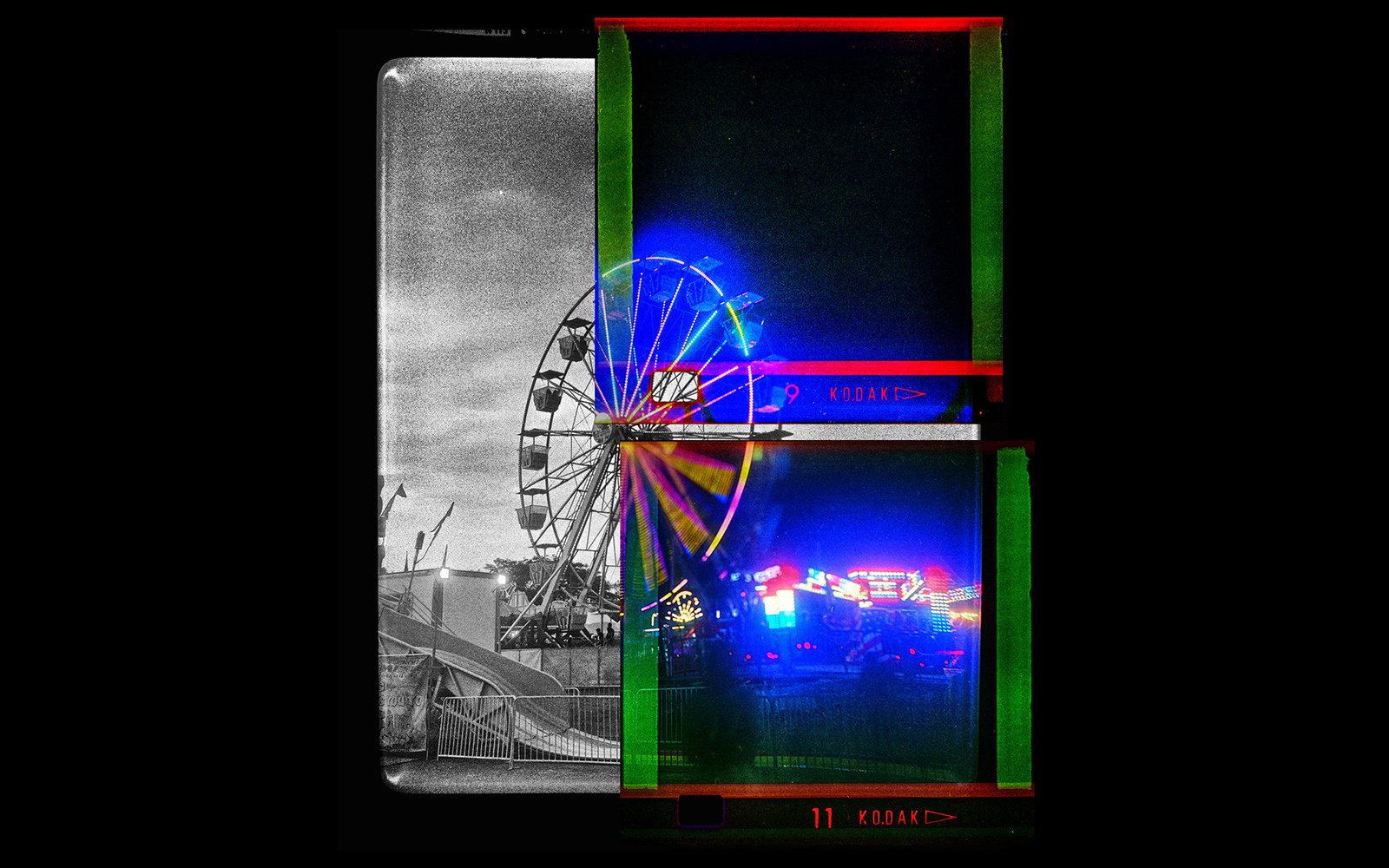 After my recent success at mixing vintage Verichrome Pan film with Kodak Instamatic film, I wanted to try this splitfilm trick again. And I wanted to create something that was a “day versus night” exposure, using the lights of an amusement park or the midway of a county fair to build my image. 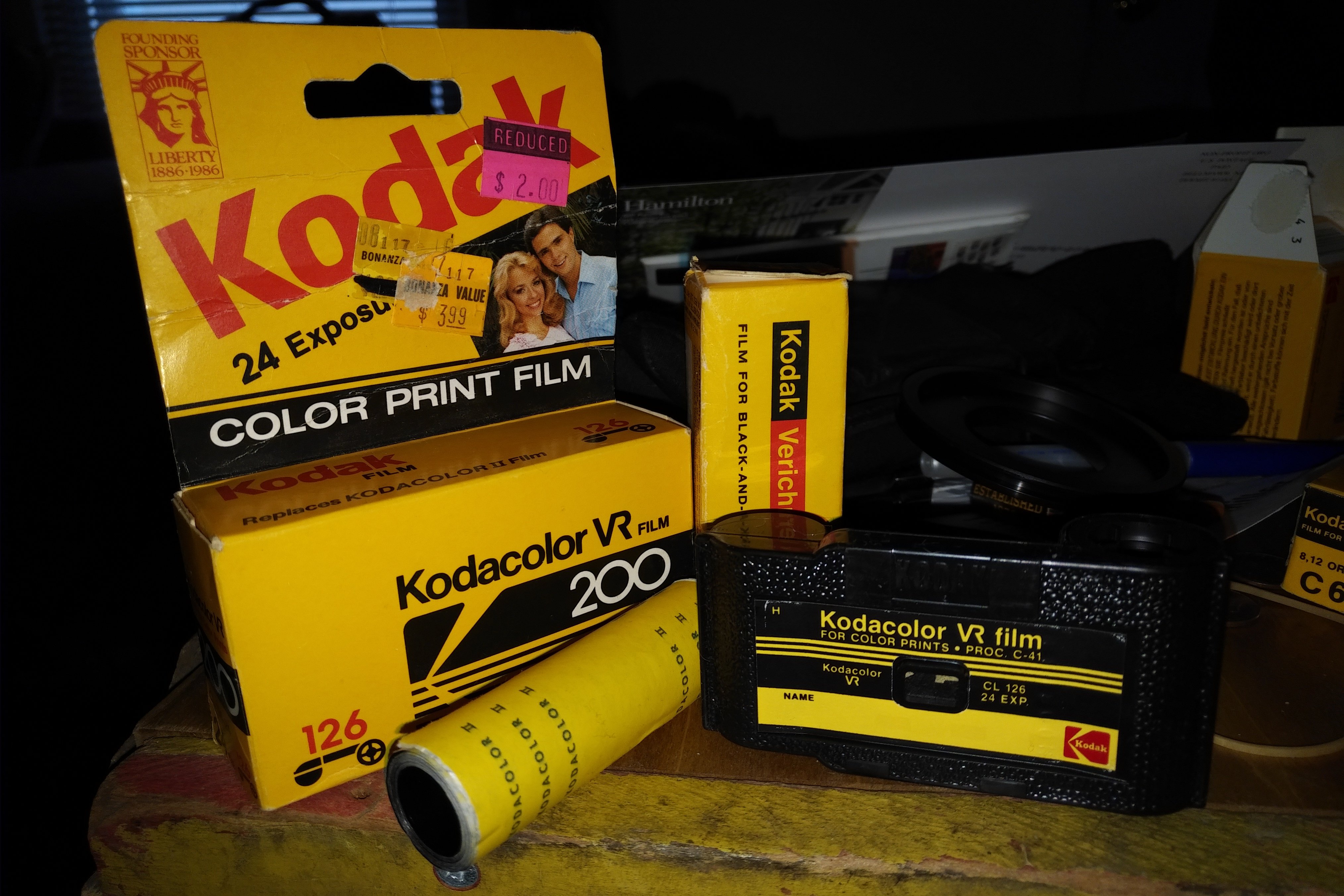 With that, I loaded a roll of 616 backing paper with four—yes, four—12-exposure rolls of Kodak Gold 200 Instamatic film. Trust me, these films are so old, they were probably manufactured just before the Berlin Wall came down. So although I’m taking a big chance in using all these films due to their age, I’m figuring that if I use four, I’m increasing my odds that at least one or two of the films will be fresh enough to produce images.

It’s Tuesday night and I’m at the Altamont Fair. I’m hoping for a nice clean view of the Ferris wheel on the midway, as arranged by the ride company Dreamland Amusements.

And lo and behold, I get lucky. 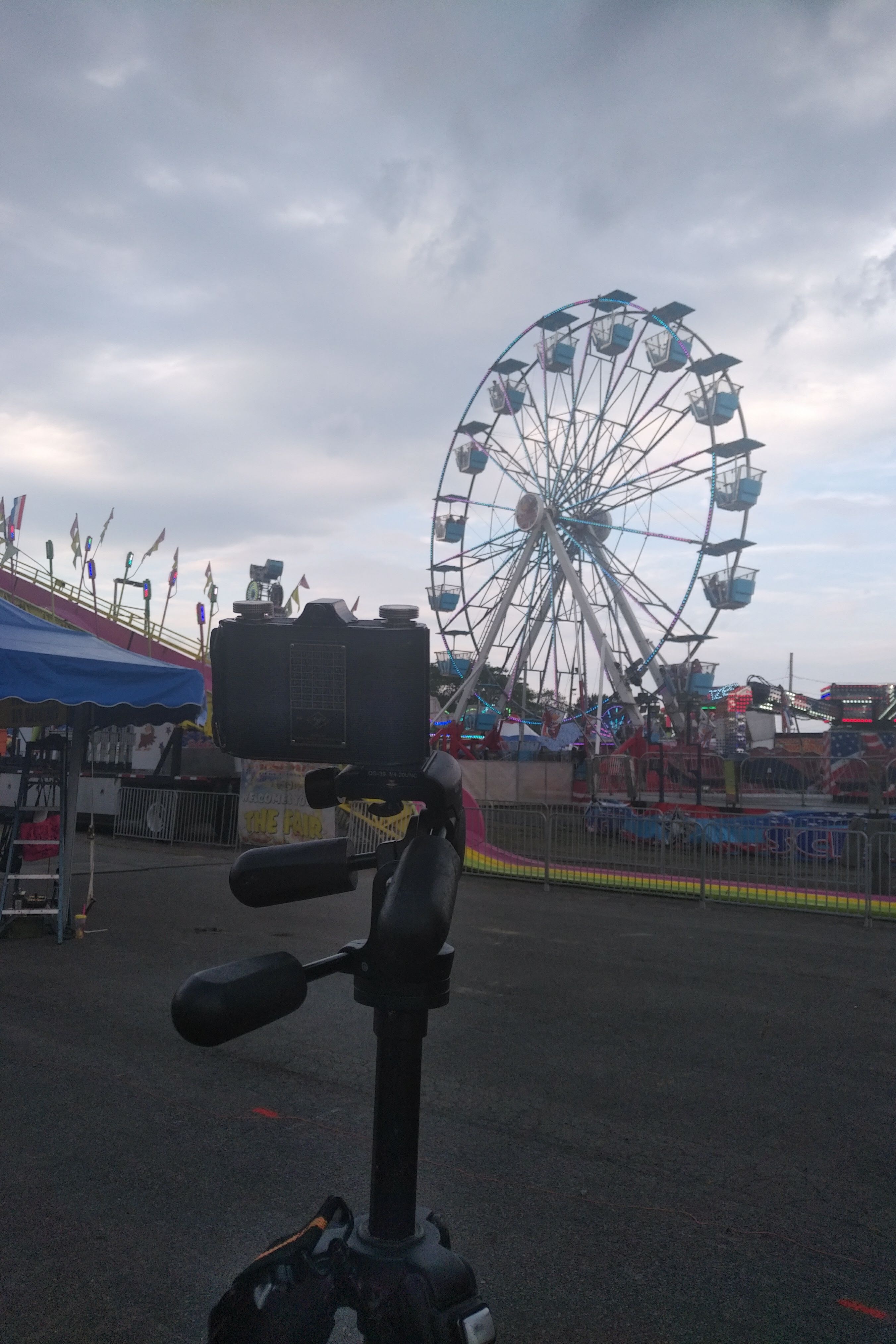 I set up my AGFA Clipper Special f/6.3 camera, tripod mounted and ready to go. I adjust the focus, the aperture, the shutter speed—primitive as it is on this 1930’s-era camera—and then I wait.

The sun, which is at my back, will drop behind the Helderberg mountains very soon. I should be able to get some great static shots of the Ferris wheel from here.

So this is one of the exposures, captured with Kodak Verichrome Pan film, taken at about 6:30 p.m in the early evening. There’s still sunlight in the sky, so there’s some visible cloud cover here.

After I used up the Verichrome Pan roll, I waited for about an hour for the sun to set, and loaded my prepared roll of Instamatic film.

So out of five films exposed that night – two of the Instamatics and the Verichrome Pan came out with useable images. The other two films were just too old to achieve a workable image. Good thing I went with a safe bet, eh?

Ooh, this has a chance.

I posted a test image on social media and it was received favorably, but I noticed that one of the Instamatic images was just a hair out of alignment. It just looked … off. So I re-adjusted using another Instamatic image from the batch.

And here’s the final result.

Bang. Not only do I have the Ferris wheel’s perimeter perfectly lined up, I also have some of the spokes going through that Instamatic frame’s lug hole. And you can make out the Kodak labeling on the Instamatic rolls.

I named this picture “Five Tickets to Ride Day and Night,” an allusion to the amusement parks where you had to purchase blocks of tickets to ride certain rides: two tickets for a kiddie ride, maybe six tickets for a roller coaster or one of those scrambler rides. I figured a Ferris wheel was a five-ticket ride at the most—or maybe it was three tickets for a single ride, but a couple extra tickets earned an all day, and all night, excursion.

One thing to note: If you’re going to use any sort of Instamatic expired film, the only color film that you could get any sort of acceptable images on is Kodak Instamatic Gold 200, which is the last batch of color film Kodak made in that line. Even then, it’s still about 25 years past its expiration date. If you want to try this with black and white Instamatic film, most Instamatic B&W’s like Kodak Verichrome Pan will work, but your mileage may vary.

I know, I know … I’ve been going on this resurrected Instamatic film kick for ages. It just means that at some point in time, I’ll get the image I want. I don’t care how many tries it takes. All I care is that the last image I capture is the best image I can achieve.

About the author: Chuck Miller is a writer and photographer from New York who has experimented with various film and digital techniques, including capturing photos that would make cameras violate their warranties. To see more of his work, visit his blog or give him a follow on Flickr. This post was also published here, and is being republished with permission.