Bruce Gilden is one of the top street photographers of our generation. He’s controversial, talented and he has his own style… so there’s no question as to why some might want to emulate him.

I look at his work and I think to myself, “I could do this, I have 2 out of the 3 things he possesses.” I’m confident out on the streets, I’m not afraid to get up close and personal. His style, I also have the ability to see how he shoots, it’s pretty well documented, so I didn’t think I’d have a problem replicating it. The only thing I didn’t own at the time was a flash and you all know that was an easy fix.

I picked up the cheapest flash that I could find that resembled Bruce Gilden’s — you know, the one with the cord. What I found was a Neweer ring flash. I figured I’d be able to connect it to my camera, but still get that off-camera flash type of look.

From what I remember, it worked pretty well. The ring flash did a great job at highlighting the subject as well as the background. The only downside was that it slowed my typical shooting pace down. The flash had to recharge and I wasn’t able to just rapid fire. This was both good and bad.

I say good because I was able to capture one of my favorite images to date. If I had been ripping and running like I usually do then chances are I wouldn’t have captured this image. The softness of the image adds a nice touch to it, it almost looks vintage. The effect of the flash also stands out in the image, you can sense the motion, and I love the little catch light in his eyes. It’s not quite Bruce Gilden, but it holds its own in my opinion. 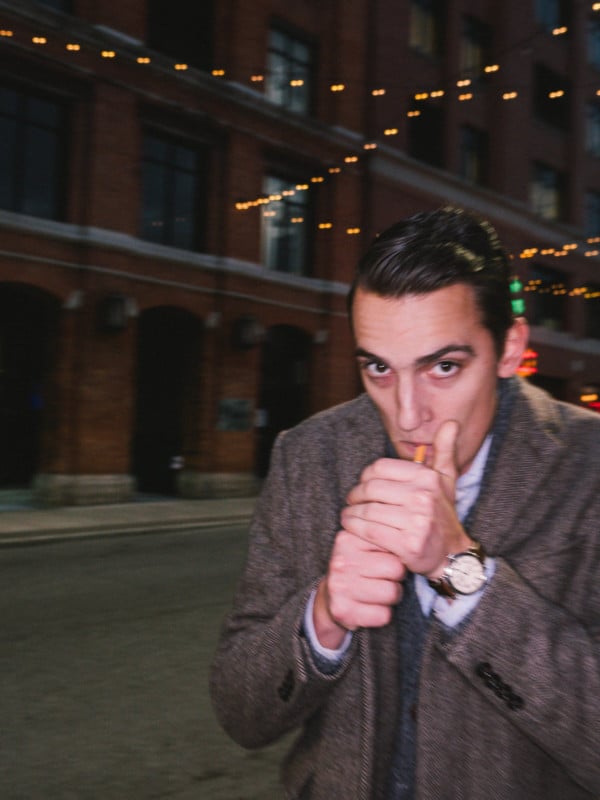 People loved the idea of this challenge. Well, some people hated it, but you know it made for some good engagement. Several people chimed in and told me how much they admired my ability to just get out there and try something new. A few people even hit me with some harsh but much-needed feedback.

“You have some guts man! This is one of the hardest exercises I could see and definitely I am not even remotely prepared for this. And I would love to see the great work of art of all the people being negative about this video. Keep it up!﻿”

“Was it an LED flash? they’re great for macro but yeah aren’t the brightest? I’d recommend finding a small Metz flash (26 AF-2 would be best as you can get them to TTL with Panasonic cameras and they look like the Leica flash)﻿”

The last guy’s advice was pretty spot on. The LED ring flash that I was using was cool in all, but it wasn’t the right tool for the job. I needed something more powerful, something that sat on top of the camera. After all, I was just taking the ring flash and placing it above the camera anyway, mounting one in the camera’s cold shoe would have given me the exact same effect.

I had planned to do this right away, but I later found out that you have to be in the mood for this style of shooting. It’s so time-consuming, so slow placed, this I sat on the idea. Almost 2 years to be exact, it wasn’t until October of 2018 that I decided to get back out there. This time, using a flash better fit for the job. 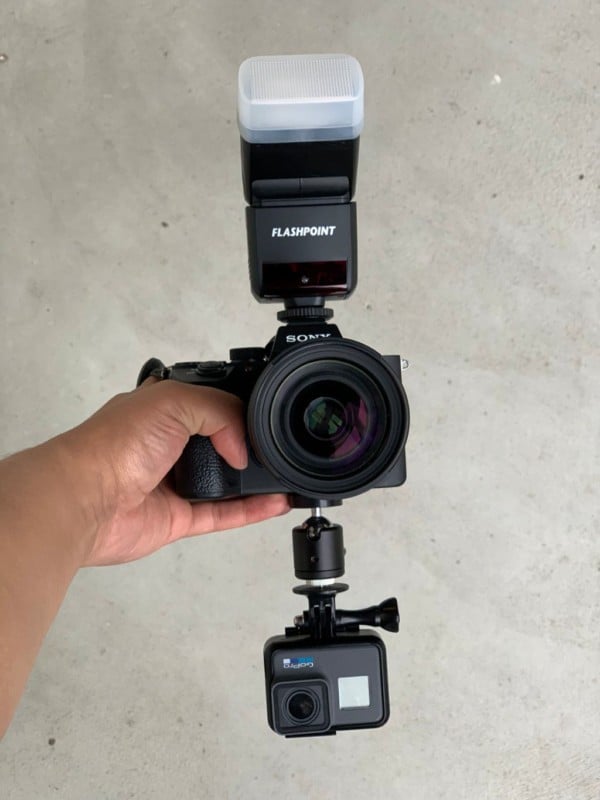 I picked up the a flash from Flashpoint. This was a much bigger flash, and when equipped with the Sony a7iii it was a bigger setup overall. This again slowed me down… but for the better. Another obstacle holding me back was that I was shooting during daylight… I’m talking 12 PM. I had no ND filter and I couldn’t crank my shutter speed up. Typically I would have the benefit of shooting at like 1/800 of a second, but not this time around.

The session started off pretty rough, I tried to get some candid moments of people but at 28mm it was just impossible. Eventually, I just gave in and stopped a few people, asked for permission and tried my best to work the scene. I began to think of some of Bruce Gilden’s photographs and I thought… he had to do this as well.

I left with some much better images after this approach. Again, nothing to write home about (even though I’m kind of doing that), but definitely a better result than my previous attempt. Below you can see a few that I felt were keepers. 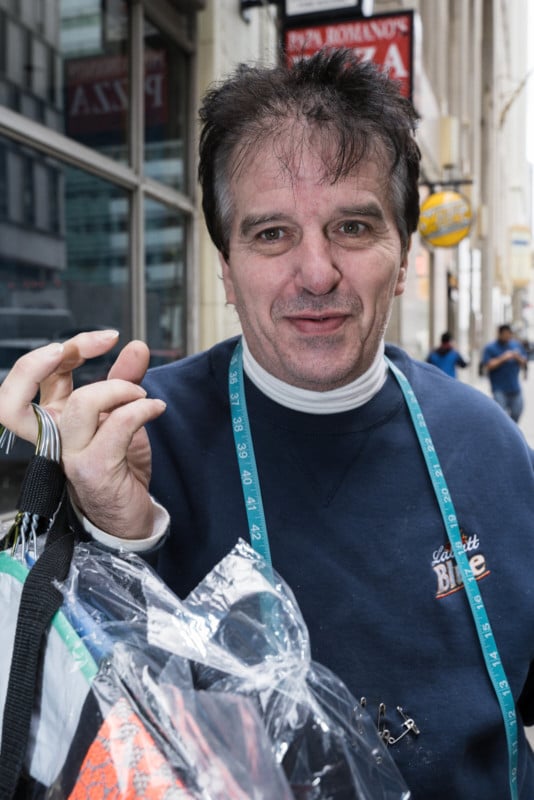 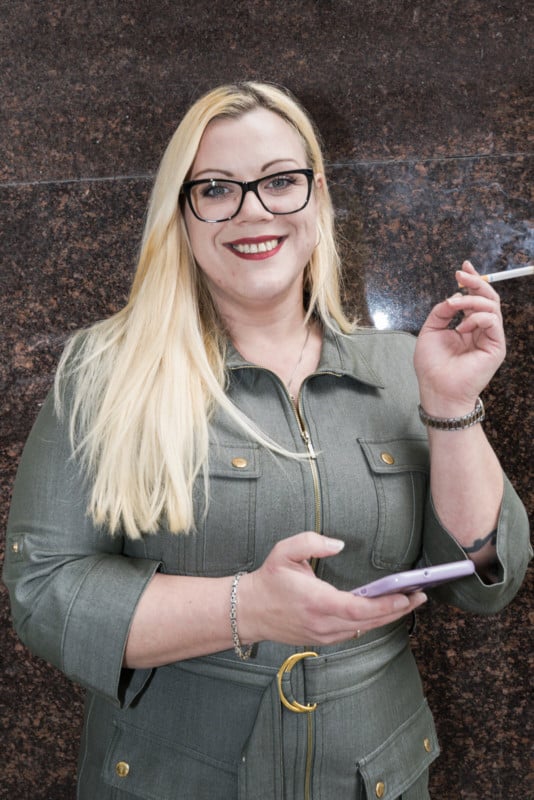 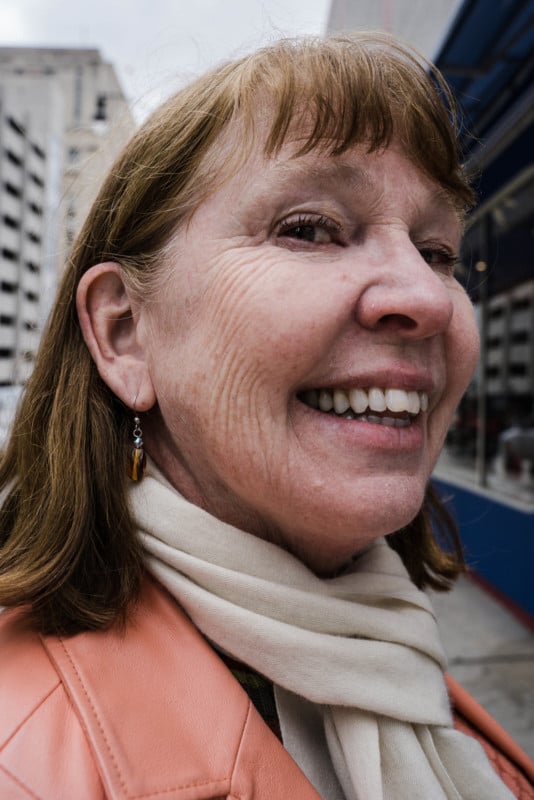 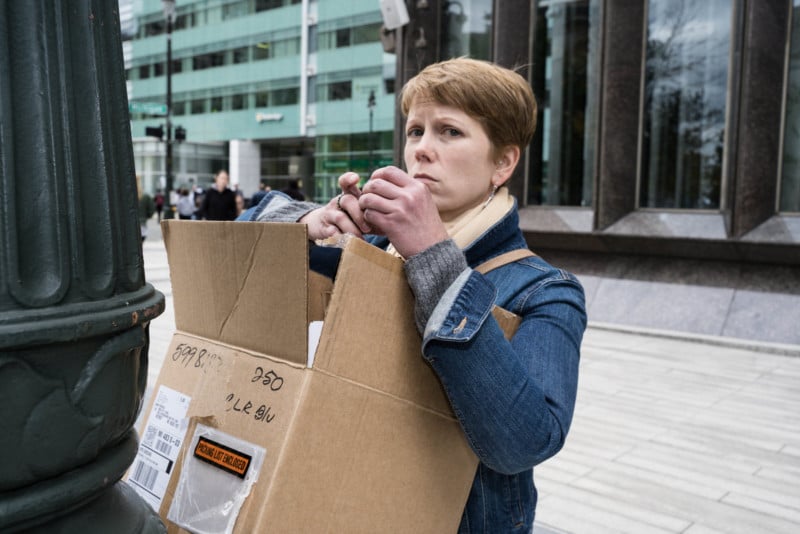 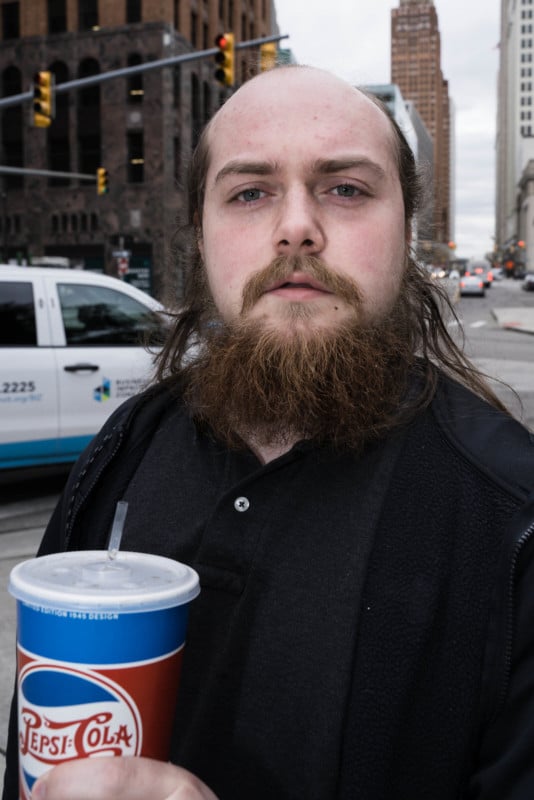 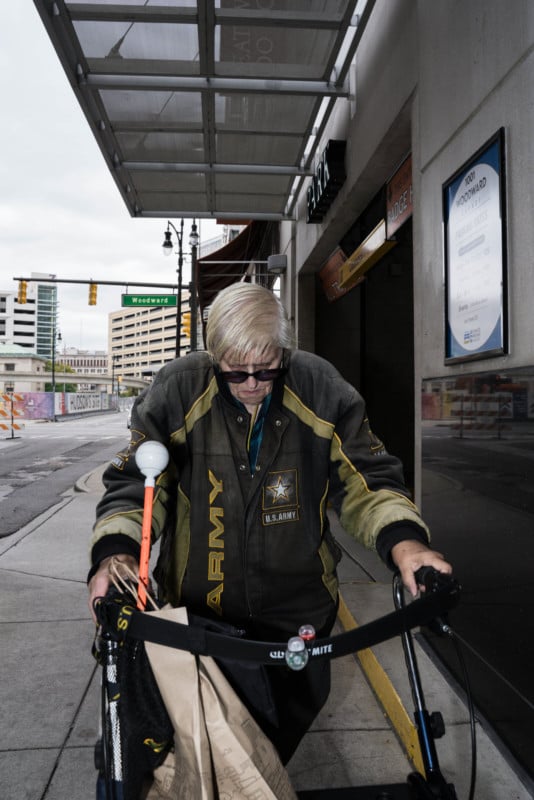 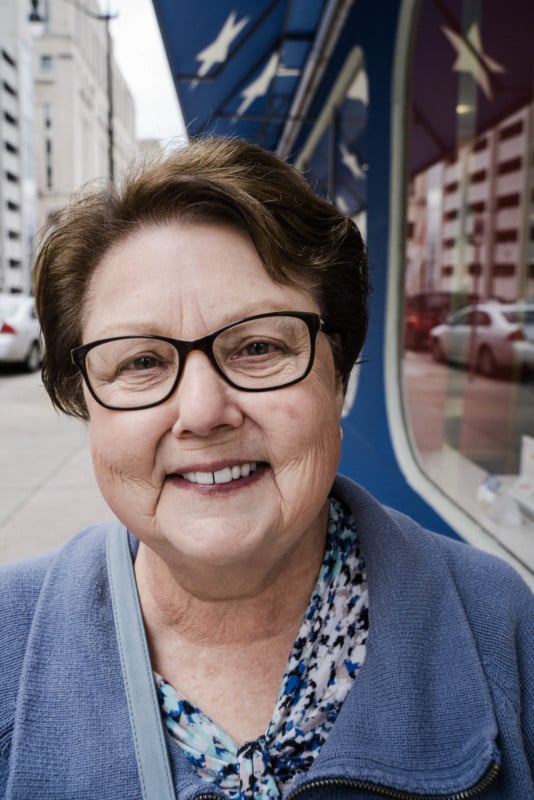 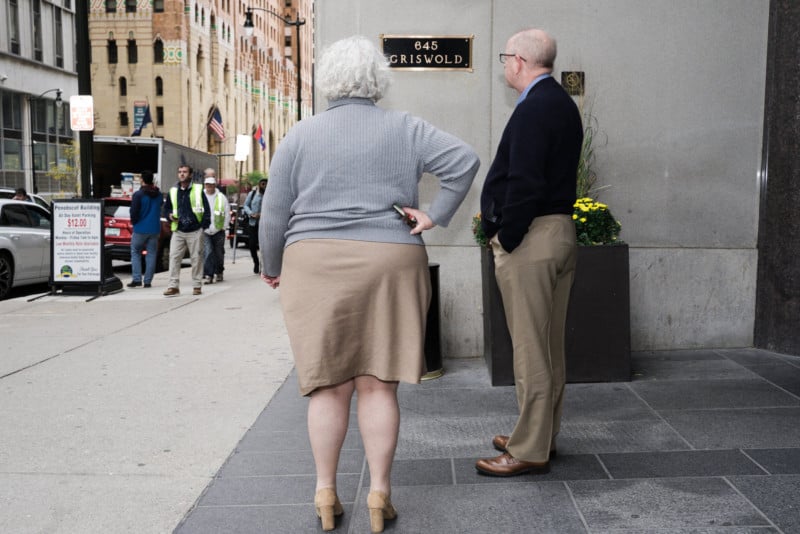 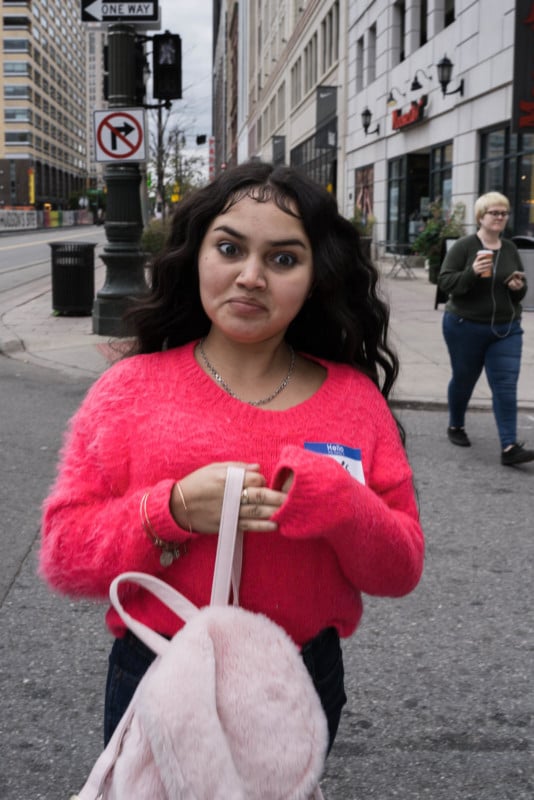 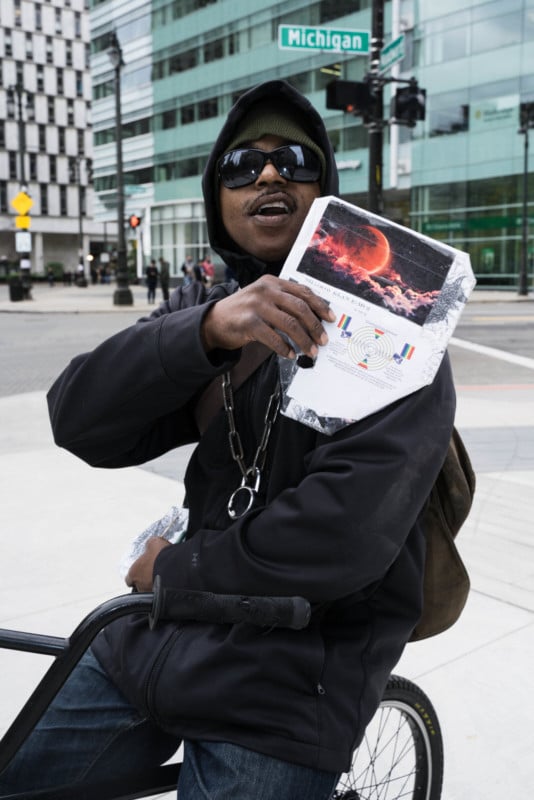 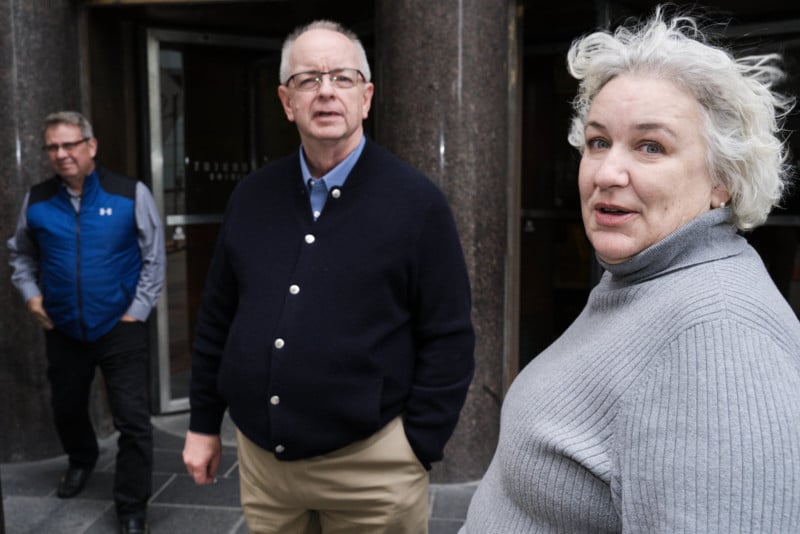 After getting some solid results I thought I would end the challenge. I found at that shooting like Bruce Gilden could yield some great results, but as I stated earlier, it’s just too unpredictable. This was until I received a flash from LightPix Labs. It was the perfect flash for this type of challenge, small and compact, yet powerful and it gave you the ability to use the base as a trigger, meaning you can get that true Bruce Gilden experience.

I mounted the trigger to my camera, connected the flash and in less than 30 seconds I was good to go. I think it’s fascinating how these things just connect, no Bluetooth, no buttons, it just worked. For those of you who shoot in the studio, you’re probably like, “What’s the big deal?” But for me, it was a big deal!

I hit the streets eager as ever and yeah, that didn’t last long. After about 10 minutes I found myself with nothing. It was cold out, a little misty, and it was early on a Friday. People were either in the house for good or getting ready to go out. I didn’t give up though, I walked around, trying to find an interesting person to shoot… and that’s when it first hit me. When shooting with a flash, your subject is the subject. They are the image, it’s not your typical street image where something cool is going on, you’re essentially highlighting them as the key part of your image. If they are boring, then so is the image. I couldn’t force anything, it was good subject or bust.

Realizing this was demoralizing, but again, I kept going. After 20 minutes of not taking one picture, I decided to just fire a few shots for practice. I wanted to get a feel for the flash. My first shot was overexposed, the second shot was a little better, this one had to be manually controlled so this was a small learning curve for anyone who may consider picking this unit up.

After a few test shots, I began to get more comfortable with the flash’s setting, but I couldn’t really figure out where to point it. The flash was so free, I didn’t know if I should go high up and shoot it or maybe place it off to the side. Eventually, I began to over think and that really showed in the shots. I had to find the subject, think about the shot, compose for it and prepare for my subject to walk past… only for them to sideswipe me. The frame that I set up… they just walked around it. 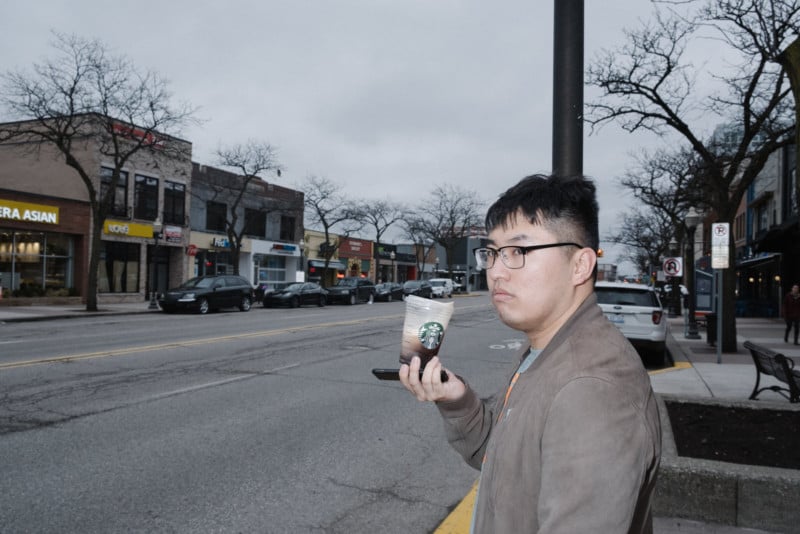 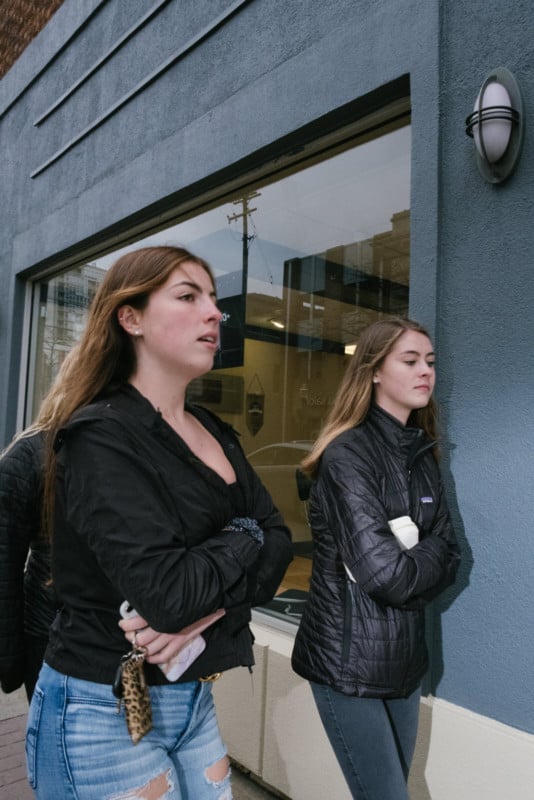 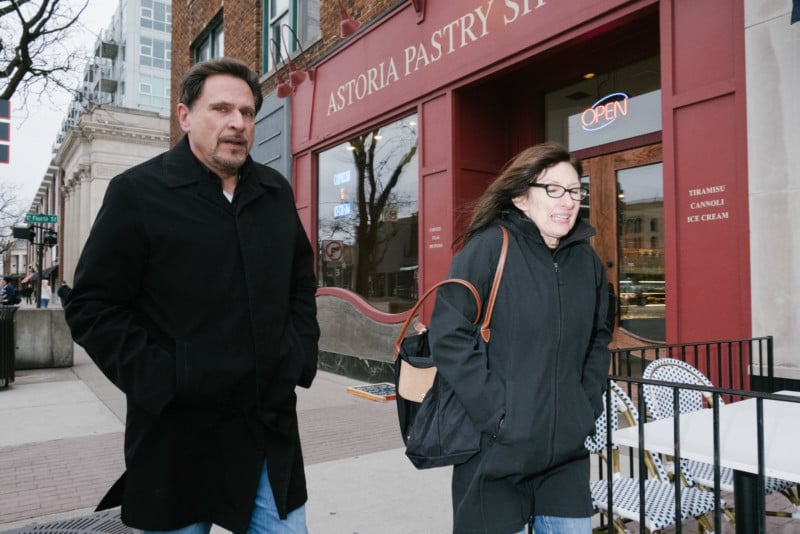 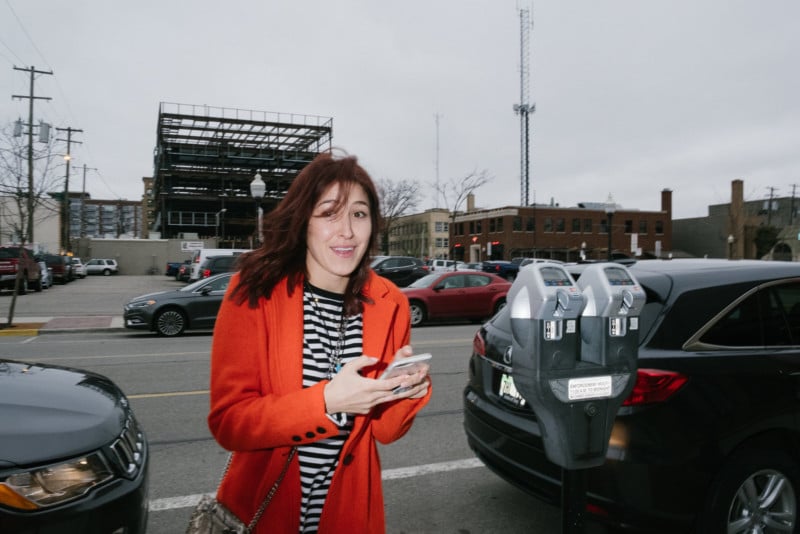 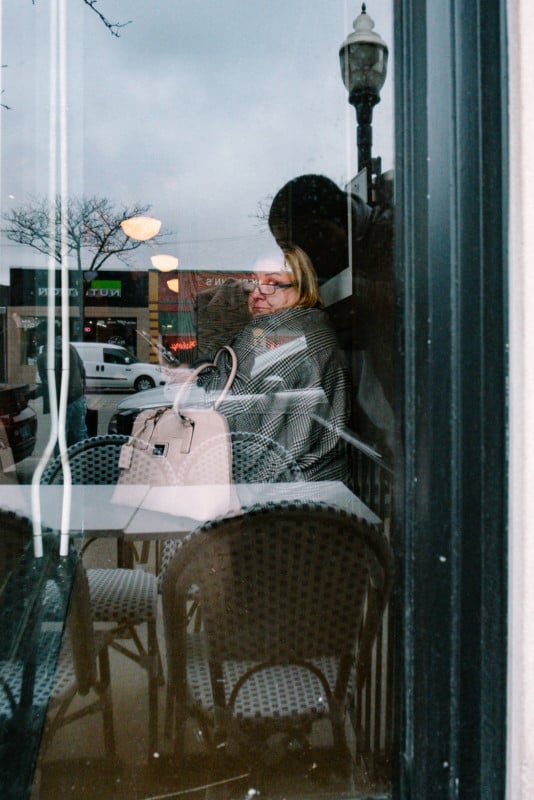 It’s safe to say that my third attempt wasn’t very Bruce Gilden, but I had a lot of fun playing with the flash. Throughout this experience, I learned that it isn’t easy to go out there and do what he does. His work is so much more than bravado and a flash. Composing your subject with a flash while on the streets is so hard, especially if you live in a city like Detroit, where it’s just you and your subject on the sidewalk… they just walk right past you.

What he does is so complicated and he makes it look so easy. There are so many people who think what Bruce creates isn’t art. After attempting his style of shooting, I’d have to disagree. It’s damn sure art. Maybe not art you like, but it’s for sure some of the best work created within the past 60 years. I’d love to see others get out there and try to attempt your favorite photographer’s shooting style. I’m not telling anyone to become a carbon copy, but trying out someone else’s approach may help you find yours…

I learned that I’m not the next Bruce Gilden, I don’t have the patience, the eye, or the yearning to carry around a big flash. Outside from that, what I also learned was that I thoroughly enjoyed having conversations with my subjects, I also learned the importance of working the scene, when using a flash you may not get it right the first time, so you’re forced to say “hey one more shot”. Even though I hated his process, I walked away with some knowledge that I can use for any style of street photography.

Trying someone else’s approach can help you find yours! I can’t wait to see what you guys create and, more importantly, what you learn from your efforts!

5 Modifiers for Photographers on the Move

A Chat with Bruce Gilden About Life, Work, and Photography