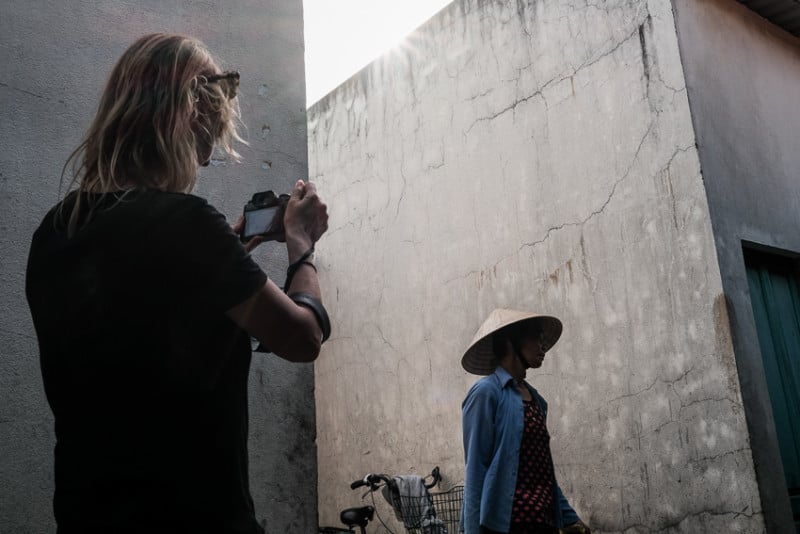 While most commercial photographers know about copyright laws and the use of a model for their images, it seems the answer isn’t so clear when it comes to travel photography. If you’re traveling the world with your camera, what laws apply for you and for your subject?

You might need to consider what it means, taking photos of people in a foreign country — photos that you may one day print, sell or publish.

What is the current law around model releases?

I am not here to explain the law to you. (Sorry!) Because there are already plenty of resources to explain that in detail. I am here to discuss how can we practically make use of what we theoretically know. Let’s start with the basics.

There is a great article on the Improve Your Photography website that explains when we do and don’t need a model release. Basically, model releases have nothing to do with your legal right to take a photo. They deal only with the publishing of that photo, meaning you can take photos of anyone without having to worry. You don’t need a model release when selling an image, either, because it doesn’t involve publishing it. However, the buyer might ask you for a model release form if they plan on having the image published (for instance, on a stock photography website).

The problem is when you plan on using the image commercially. This is when things get complicated.

First of all, every country has different laws regarding this matter. So you never really know what to do within a particular country, unless you spend a lot of time researching the laws of each place in advance. And let’s be honest, we don’t often do that.

Most individual protection laws state that if a person in your image seems to endorse your product, then there is a need for a model release. The same thing applies to social media: you could post any image that includes people as you’re simply showing an image. But if you’re a wedding photographer, selling your services through an image, then the person in the image – the model – is endorsing your product. And you could get in trouble if you don’t have a model release.

What about a model release for travel photography?

As I’ve mentioned above, the act of traveling and taking photos doesn’t require you to have a model release form. I talked about this with my friend, Justin Mott, who told me:

If I’m doing an assignment within the journalism world wherever I am in the world I ask questions for my captions such as what’s your name and age. When I ask that question my assumption is that the person knows their image will or may be published. I don’t typically do travel photography without being on an assignment or my personal work. That doesn’t mean I can sell that picture for commercial usage, it just means I feel comfortable using that image for editorial use and on my website.

Or basically, using an image in an editorial sense does not require a signed model release form.

There is a consensus that if you take photos of people in the right way… well, these people agree to be photographed, right? However, I do not think that we can rely upon this as a lot of the people we visit and photograph, mostly in developing countries, have no notion about how the image will be used. For most of them, it’s just fun to be photographed. 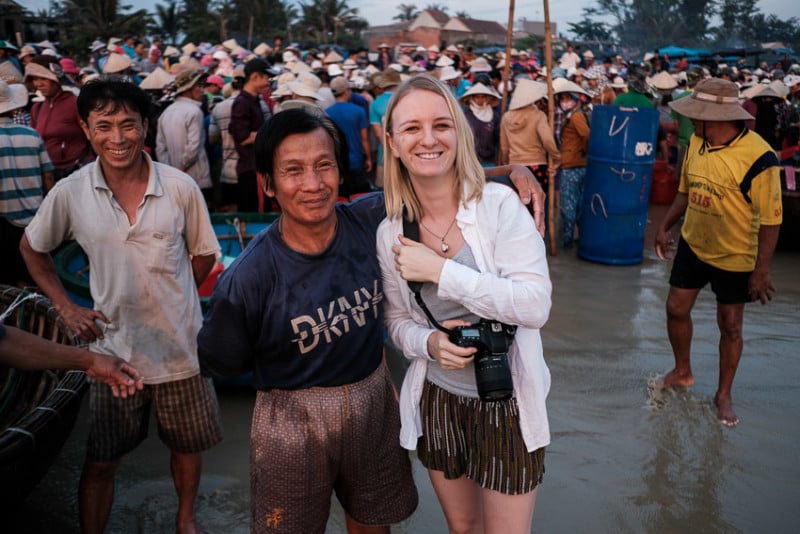 Can you actually have someone sign a model release form when traveling?

Because I am far from being an expert on this matter, I contacted some people who are. I asked Noi Pictures, one of the only photo agencies in Vietnam, about their experiences concerning model release and image rights in travel photography.

Seb, what would you recommend to people traveling and taking photos if, one day, they sell an image with a person in it?

Sebastien Loffler: In most cases you can sell an image for editorial usage (the image – and its caption – is used as a piece of information itself, or illustrating an article), even if you don’t have a model release (provided that you do not depict anyone in a way that would be harmful to that person, or with a fake caption misleading the readers).

For commercial use (the image is used to sell a product or a service, and therefore is generating revenue), you do need to have a proper release from the model, for that particular brand, usage, and its duration. If you can’t get it, don’t sell the image.

So what does it mean for us, traveling and taking photos, if we don’t know what could potentially happen to our images? What can we do in a practical sense?

As you can hardly ask everyone you shoot to sign anything ‘right here right now’ (don’t even mention the ‘rights in perpetuity’ type of model release), I usually recommend photographers to interact more with the subjects, especially when they feel they’re ‘getting something’, and to write down the names and contacts of the depicted persons. You can use this to send them one of these nice portraits – actually a good way to make bonds, and if you ever need an authorization, you have the possibility to find them back.

Do you honestly think it’s possible to have people sign model release forms when traveling in Asia?

Anywhere in the world, actually – even if you manage to get a full rights’ release from a stranger you just shot (good luck with that), this would be quite unfair in my opinion. People usually don’t sign a paper saying ‘I give this person the right to use my face in any way he wants, forever and ever’… and they’re actually right to do so!

There you have it. It is extremely unlikely that the people you photograph when traveling in foreign countries would sign a model release form for you. It would take a lot more effort and time, and probably a fixer/translator to help you do so. The main point being: rarely will someone sign a paper that they don’t understand.

So what can you do when a model release form is required by stock photography agencies, and even some photography competitions?

Stock photography websites ask for a model release because they plan on making commercial use of this image. This poses a problem for travel photographs. As I’ve described above, it’s very difficult for someone traveling to a foreign land to have people sign a document they probably don’t understand.

So when a stock photo agency, for example, asks me for a model release when I submit a travel image to their website… is it fair?!

Here’s what Noi Pictures had to say:

These businesses hire lawyers who add these terms to the contracts to protect their clients and themselves from future claims. I don’t think they care about how hard it can be to get such a document. Unfortunately, more and more tend to reject such responsibilities on others; I imagine this might push some photographers to either provide fake releases or to exaggeratedly stage their photos – which is another debate.

Now. I’m not saying that a photographer should provide a fake model release form when asked for one, but what choice does he/she have?!

The thing that really bugs me is that surely, the stock photo agencies or photography competitions who ask for such forms are fully aware of this. They need the model release form to cover themselves in case something goes wrong. And if a form has been forged, you, the photographer, will be blamed. Even though you didn’t really have a chance to provide a genuine form. A lot to think about. 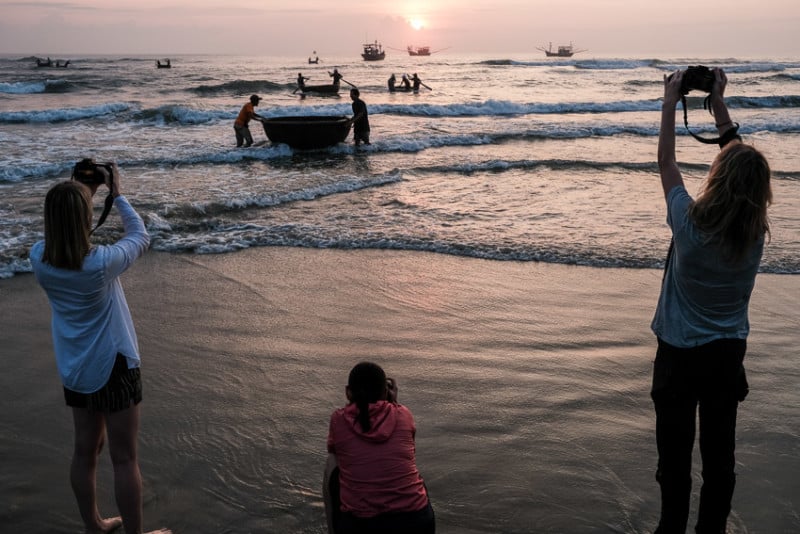 I asked my friend Mitchell Kanashkevich for his opinion on the matter. Mitchell has been traveling the world extensively, for both travel and commercial photography. He gave me a great point of view on model releases, plus on travel photography in general:

To be honest, images on their own make very little money nowadays. Your photographs can have an impact and be shared around if they’re part of a story. And for this, you put in a lot of time and work. You don’t profit from someone’s appearance; you profit from your ability to put everything into context, presenting your work in a particular way. The story is only there when you can interpret it and present it to others.

When I think about getting people to sign a model release form, it doesn’t work in that context. I am no longer interested in photographing exotic tribes unless I can think of a new way to photograph them. And this will be made through a story, where the single image has less power than the body of work. That means there won’t be any single image for sale – so there is no need for a model release.

If you think about it, we are no longer the ones with the privilege to depict the world. Nowadays, these tribes can photograph themselves… so we have to come up with our own unique point of view that goes beyond photographing someone because they have a cool turban or costume.

Very wise words. Thanks to everyone who responded to my requests!

About the author: Etienne Bossot is a travel photographer based in Asia. You can find more of Bossot’s work and writing on his website, blog, Twitter, Flickr, and Facebook. This article was also published here.

10 Quotes from Writers That Will Make You a Better Photographer