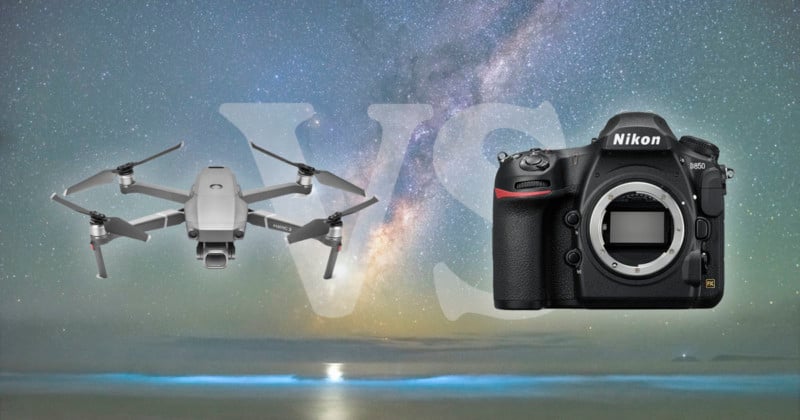 This was a fun experiment and, to be honest, I’m not sure if it’s been done before. I read about photographers capturing the Milky Way with their phones so I wanted to put a drone to the test and see what it could do while hovering. As it turns out you can not only catch the Milky Way’s galactic core but also meteors and satellites as well.

The experiment came about as I was on the beach in Eastern Australia. I arrived shortly after midnight with both the Nikon D850 and DJI Mavic 2 Pro in hand. Conditions were not ideal for the Nikon. A light sea fog stretched along the beach, creating less than desirable astro shooting conditions there. It wasn’t thick, but it was enough to significantly reduce sharpness, so I used the fog to my advantage and used the drone to light a couple of shots from the air.

After that, it was time to take the drone up above the fog and see what it could do.

I set the intervalometer on the D850, left it on the beach for a time-lapse and got out the Mavic 2. The goal was simple: See if the DJI Mavic 2 Pro could capture the Milky Way galactic core in a reasonable fashion and compare images between the two cameras.

Some things needed to be right for this to work and they were ideal that night:

1. First I needed the galactic core to be low enough to the horizon that the drone could capture it without a problem. The Mavic 2 camera gimbal has a 20-degree up-tilt but I didn’t want to have to worry about angling the camera too high up.

2. The second priority was calm air. The Mavic 2 can shoot up to 8-second exposures and I’d need all the exposure time I could get without it moving around in the wind.

3. Third, it needed to be dark, obviously, with no light pollution and no moon.

The Mavic 2 Pro includes a built-in Hasselblad L1D-20c camera and a 20MP 1-inch CMOS sensor. The field of view is about 77°. It allows for up to 8-second exposure times, shooting in DNG raw, and a max 12800 ISO. So I shot with those settings.

To avoid the fog entirely, I took the Mavic up to 276 feet above ground level (AGL) and shot from there.

I’ve shot with DJI gear since 2014 and since the long exposure option was introduced in the Phantom series several years ago, I’ve been a big fan. It’s a tripod in the air. Calm nights with proper lighting can yield wonderful exposures. See the Singapore shot below for example.

While well-lit skyline shots are easy for the Mavic 2 Pro, with the Milky Way challenge, I was going for darkness and max ISO, with the only light coming from the stars or in this particular case, planets as well. Venus and Jupiter were in the galactic core at the time, so they would have to be a part of the composition. No getting around that.

Surprisingly, the Mavic 2 was up to the challenge. As you can see by the images below, the Mavic caught, not only the Milky Way core but a meteor and two satellites (top left of image).

The D850 captured the same scene, at the same time, through the misting fog on the beach. The weather conditions handicapped the ground-based camera, the fog measurably decreasing the sharpness of the stars.

Both shots are below, without any processing.

The high ISO yielded some strange red banding at the top and bottom of the Mavic image, and of course there was a fair amount of noise but still rather respectable for an 8-second exposure, with the machine hovering at 276 feet off the ground.

I’m new to the process of image stacking, but gave it a try with several of the Mavic images shot that evening. Image stacking is a technique to reduce noise and improve image quality by combining multiple astrophotography shots. The following image is an 11-image stack from the Mavic Pro 2, stacked in Sequator. Would you have guessed it was shot from a drone? Below it is an 11-image stack from the Nikon. Click on either image to view a higher resolution.

Star trails with a drone? Hmmmm…. I don’t think you’re going to see a lot of people posting these online anytime soon. Below is a 22 image stack shot with the Mavic 2 Pro and stacked in StarStaX.

Don’t Give Up Your DSLR Yet

Given the challenge of the misting fog on the beach facing the Nikon D850, I’d say the Mavic 2 Pro put up a good fight. It will never be my go-to gear for astrophotography but it’s impressive nonetheless.

About the author: Christopher V Sherman is a commercial and fine arts photographer. The opinions expressed in this article are solely those of the author. In February 2018, Sherman put 99% of his belongings in storage in Austin, Texas in order to travel. He tries to post a photo a day on Twitter, Instagram, and Facebook. And when he has something more in depth to share you can find it on his website. This article was also published here.

6 Headshot Tips: Advice to Give Your Clients for a Portrait Shoot

Shooting Dreams and Nightmares: An Interview with the Bragdon Brothers