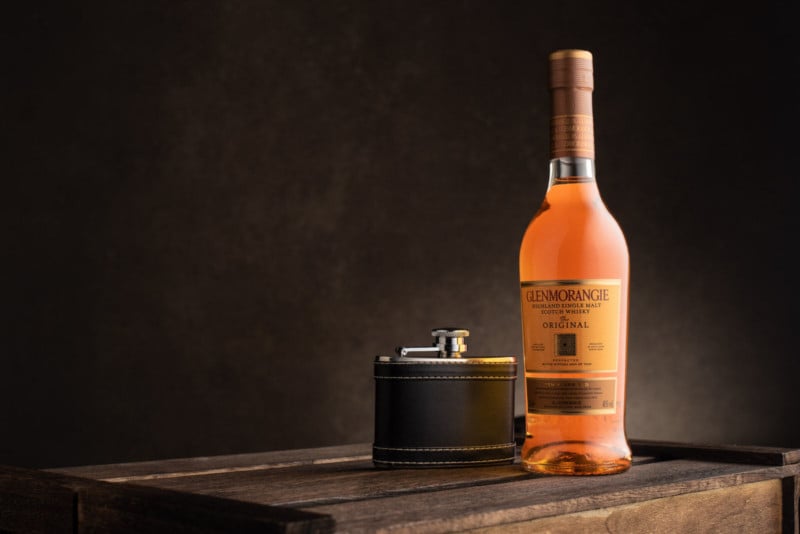 This article is for all of the new photographers new to lighting and to all who think they are limited by their lack of gear! I will show you how you can create this whiskey image with just one light, in-camera, and with no editing.

Here’s the video version of this tutorial and walkthrough:

Most of this image is in the setup, and by that, I mean shooting at a nice angle for the bottle and hip flask — an angle that is pleasing to the eye. For this shot, I had the camera low and pointing slightly upwards to the bottle and flask. I played about with the position of the wooden apple box and settled for this angle.

For the background, I used a hand-painted backdrop from Artery Backdrops. It has great texture and colors which suited this scene perfectly but you can use pretty much anything as a background just be mindful it compliments the product your shooting.

On to the lighting setup and a little technique I discovered which works great in this scenario. I used the Pixapro Citi 600 in a 90cm Softbox, but don’t be put off if you don’t have the same light — you can use whatever light you have, you only need one. First, using the Softbox to create a nice highlight down the side of the bottle and positioned camera right. The problem we have is the left-hand side of the bottle is really dark, so we need to add some light to it. But remember: we are only using one light. We do this by adding a white foam board to bounce the light back into that side of the bottle. If you don’t have any foam board, you can use a card or anything that will reflect that light back. You can see how it has lifted the shadows and produced another highlight down the left side of the bottle. If you don’t like how wide that highlight is, simply adjust the fill card/foam board until you get your preferred look.

A couple of things are still wrong with this image, the first being the highlight on the right of the bottle its still too hard. The second is there is too much light falling on to the canvas background. The best way around this would be to move the whole set away from the background but, if like me you are limited for space, we need another way.

You could use a flag/gobo placed behind the light and in front of the background to stop the light falling on it, but that would mean more stands in a small space. My workaround is to add a strip box grid to the softbox at the back of the softbox and turning the modifier away from the background slightly (you can see how I have done this in the video). 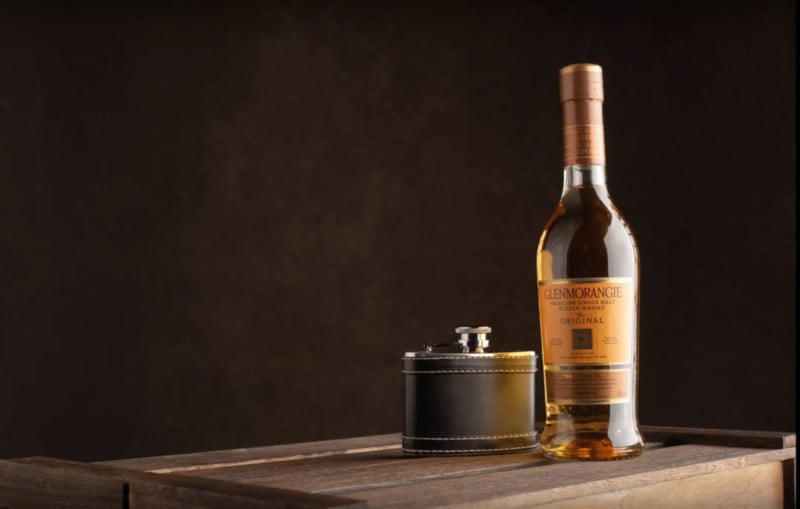 I have the background how I want it. It’s time to work on the highlight down the right-hand side of the bottle. This highlight is too hard even though we are using a softbox that’s placed quite close, we need to soften this more and we do this by adding an inexpensive diffusion panel from a 5 in 1 reflector (if you don’t have one of these a white shower curtain would give a similar effect ). If we position this as close to the bottle as we can so it doesn’t creep into the shot and take another shot. 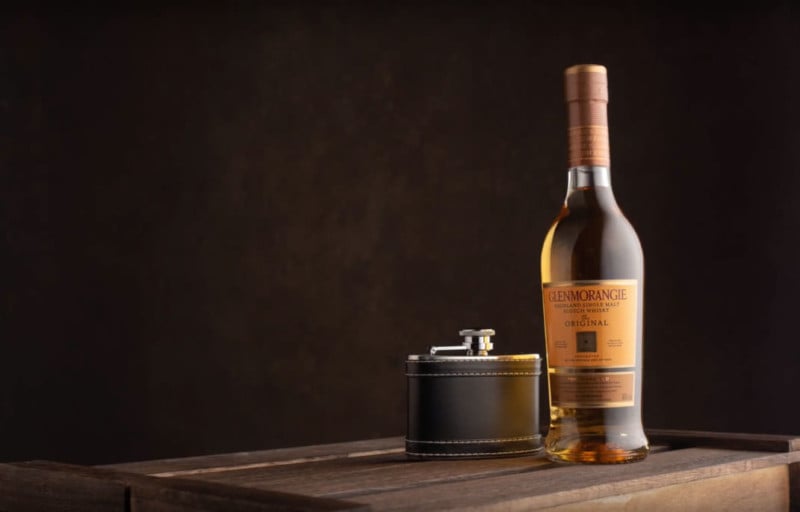 That has produced a really nice soft highlight that looks so much better. I would much prefer to light this with multiple lights it would be so much easier to get everything looking exactly the way I want it but we are sticking with just the one light for the purpose of this tutorial.

Next, we need to lift the color of the liquid in the bottle. This is going to make a big difference to the whole look of this set and we do this by adding some colored card cut out in the shape of the bottle, just slightly smaller in size overall, and placed behind the bottle to bounce light and color back through to give this effect: 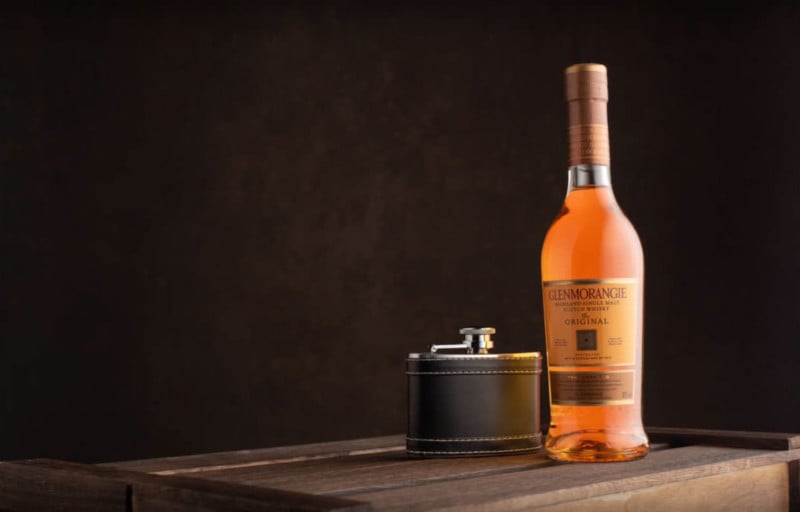 Wow, that really does make a huge difference to the image! Now that we have that looking really good with just one light. I now want a small ball of light on the background just a glow, but how do we do that if I only have one light? Well, this is where the great little technique I discovered and tested out on this image comes into play.

You may already be familiar with or know of the multiple exposure technique. I have seen this used many times in portraits where they take a portrait shot almost silhouetted and another image of the sky and clouds and the camera combines it all in camera. This got me thinking — I wanted to try this in a product shot using just one light. To do this we need to set up the camera to shoot two images and combine them in camera. On my Nikon D750, I turn on multiple exposure mode and set the number of shots I need to take, you have a choice of 2-3. Once this is set on the camera the next step is to take the first shot:

Now what we need to do is remove the light from the softbox and fit it in a standard gridded reflector and place it facing the background just behind the bottle. We take another shot: This is the really cool part! The camera now combines the images adding the nice glow on the background area to our first image producing a raw image in-camera!

I was super happy with the results and using this little technique and I hope it gives you a bit of inspiration to give it a go as it is really effective and produces great images with just one light!

Rooftop Photos of Tokyo at Night