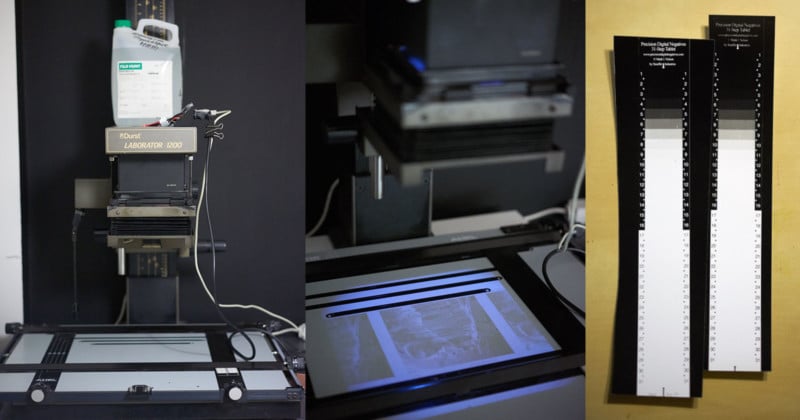 I recently converted my friend‘s Durst Laborator 1200 enlarger to use LED lights. In this article I’ll share how I did it.

Advantages of having a LED head:

Everything is still a work in progress and everything you see is mostly a result of our quick and dirty workflow with a shameless amount of hot glue to fix everything down temporarily. We’ve expected to have a few issues here and there and everything has to be easily reversible until we’re more confident in our solutions.

I’ll start by posting the where we ended up in the end: 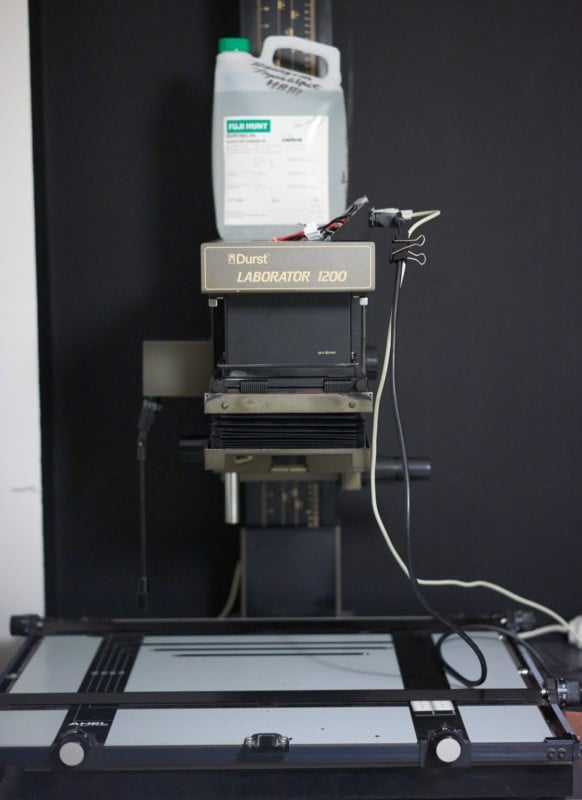 Yes, that’s a filled 5L bottle on top of the enlarger. The color head that we’ve removed weighs even more than that and until the laser-cut-form-fitting-counter-weight arrives, that bottle will have to act as dead weight to prevent the head from breaking free of its locked position and launch into the orbit. 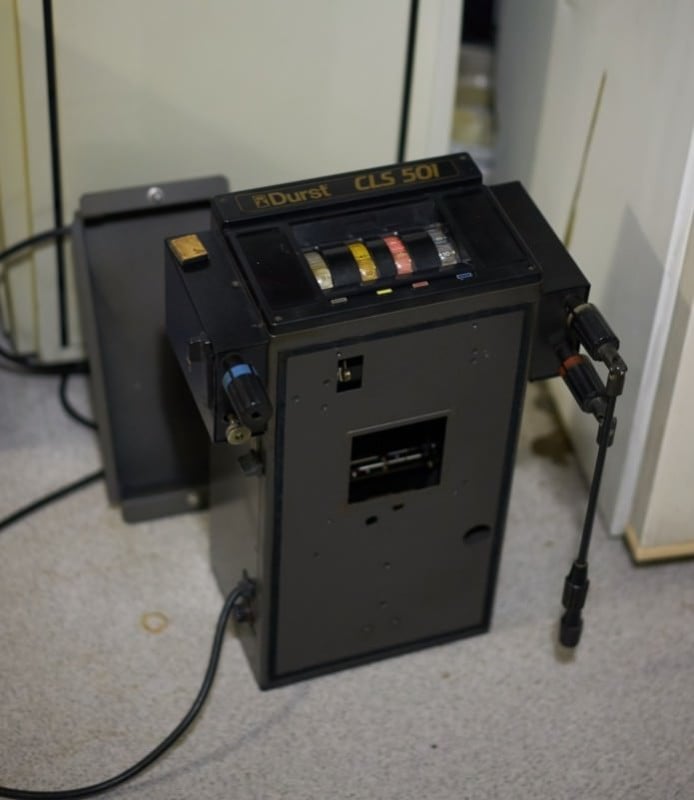 All the drivers for the LEDs, power supply for the control unit and relays are inside the remaining chassis, tucked away behind the faceplate. We 3D printed a bracket (in the wrong orientation so the power switch is away from us while the power cable is near, measure twice print once everyone) and placed it temporarily on top of the head. 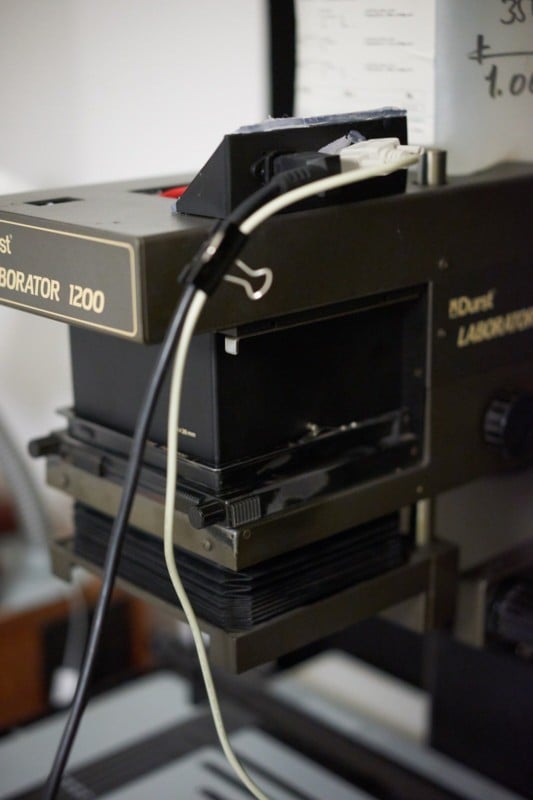 Since then, we’ve reprinted the bracket and everything looks better now (with much less hot glue everywhere) but haven’t taken photos of that yet, so this will have to do. We went for the DSub 9 socket so we have enough pins for communication and other features. 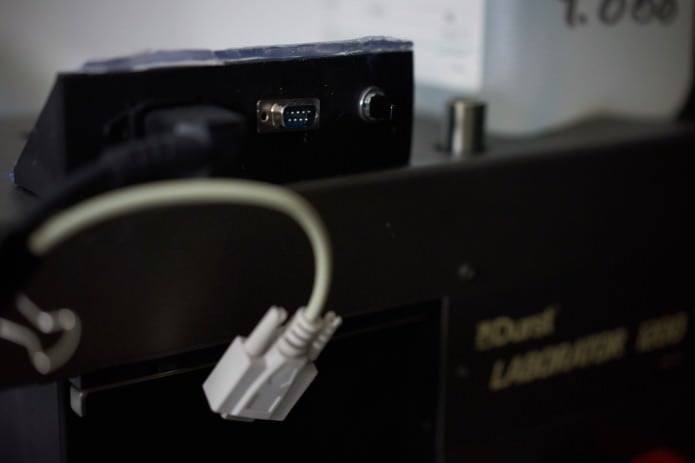 The black rectangular box underneath the faceplate is the diffuser box and some of you may have spotted that it says 24×36 mm on it. That’s because this enlarger (that my friend had rescued from being scrapped) came with a 35 mm diffuser only. All that bulk and weight for that? 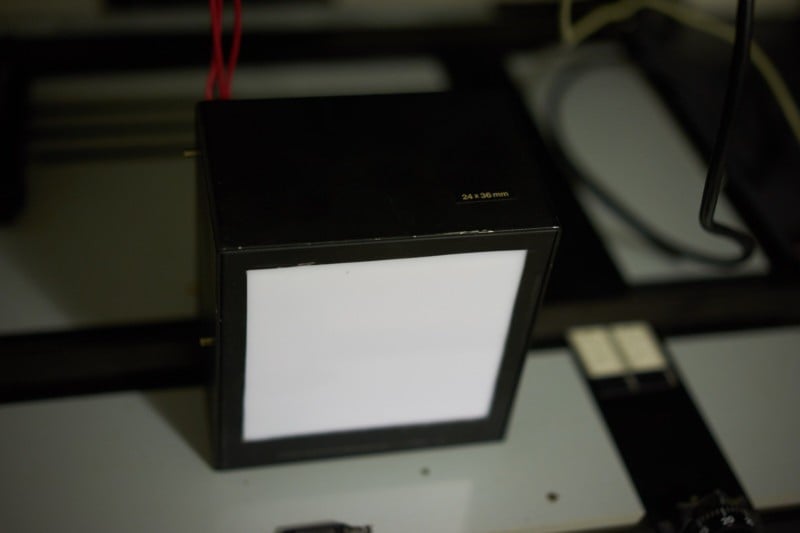 Much better now. If you think that this diffuser is larger than 35 mm, that’s because we took a Dremel and cut out most of the bottom section. The newly inserted opaque white acrylic sheet is large enough to cover a 4×5 negative in either direction now. 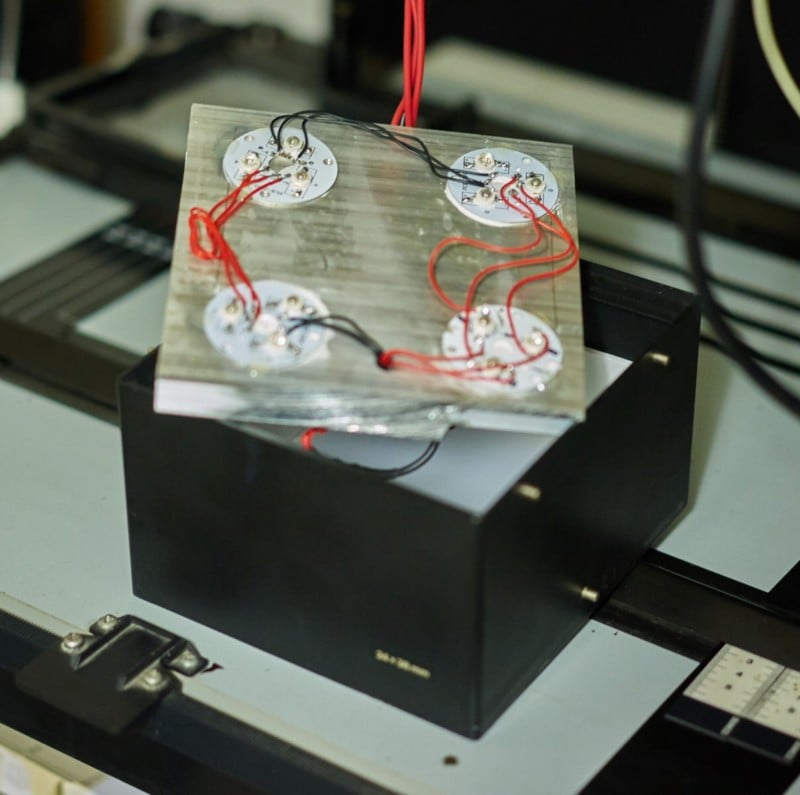 Four clusters of LEDs. Following the suggestion of our dear friend Alexander Kharlamov (who has already built 6 of these conversions so far), we went for Red, Green and Purple LEDs, placed in the corners. According to some computer simulations, this layout gave us the best and most even illumination. The ones closest to the center are the red LEDs since even illumination is not a major concern with them. They are there just to act as a safelight, essential when placing some paper underneath the enlarger. That’s right, we won’t have to use a red safety filter under the lens anymore (we did test them with some paper and they turned out quite safe to use). 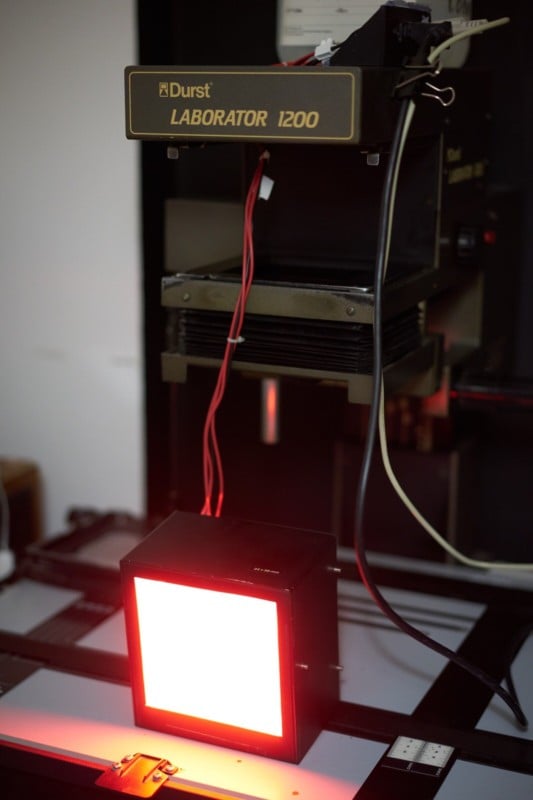 Here’s how the diffuser looks like with the red LEDs on. We also covered the inside of the box with some white reflective material and used two layers of opaque white acrylic at the bottom with a 1cm spacer between them. In the end, the lighting seems quite even, even for the red. 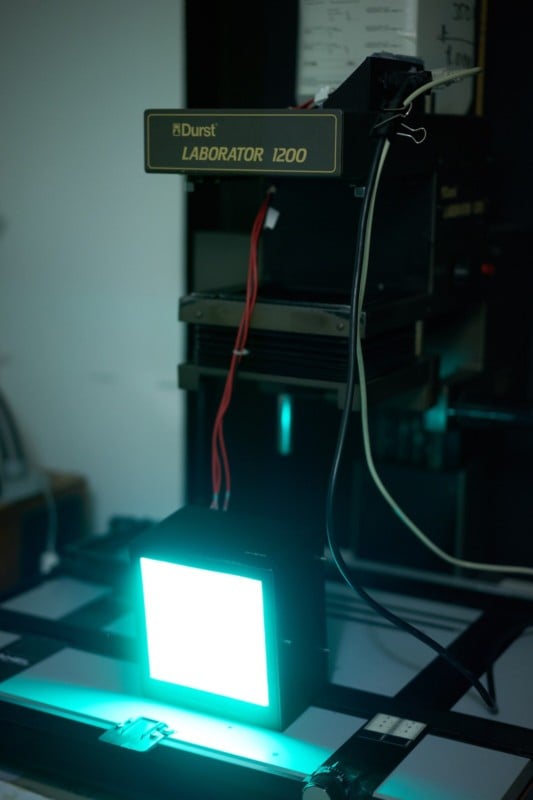 The green LEDs are closer to the corners (one in each) and are used for low contrast printing. They are more or less equal to an Ilford #00 filter and only activate the low contrast emulsion of the paper. 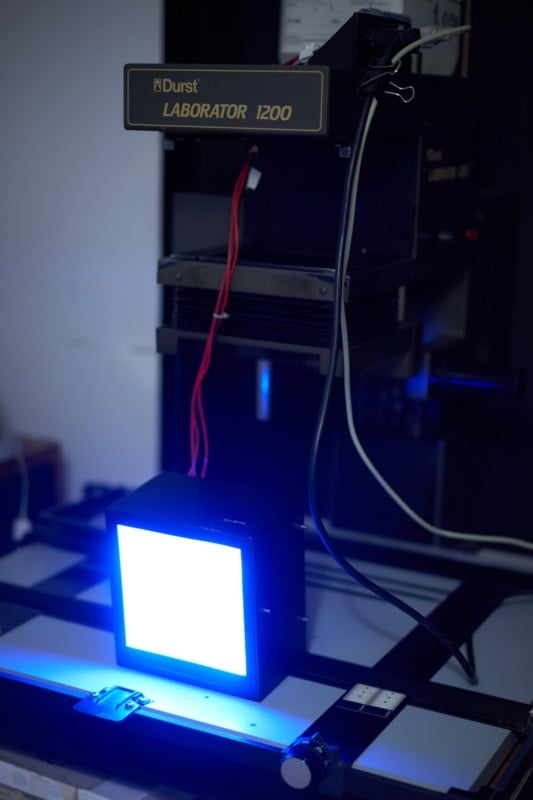 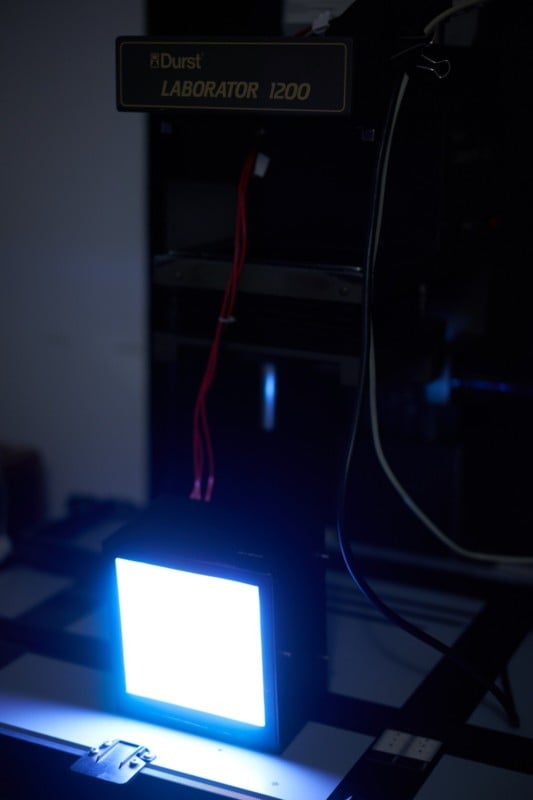 Here’s all of them on at the same time. Looks a bit bluish due to the white balance but it’s much closer to white in real life. 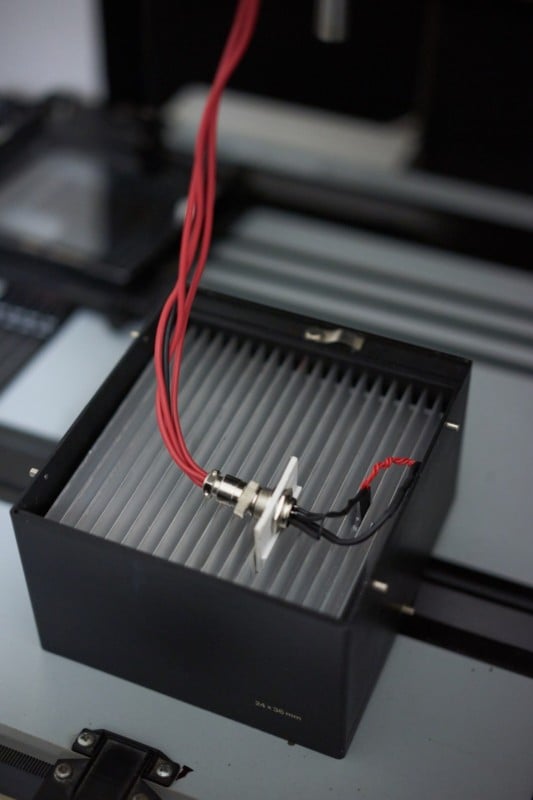 There’s a huge heatsink directly behind the LEDs. We used thermal paste and a drop of epoxy to attach the RGP clusters that are built into circular and aluminium PCBs. If we’re not happy with the light distribution, we’ll look more carefully into the arrangement and the number of the LEDs but this should be a good starting point. 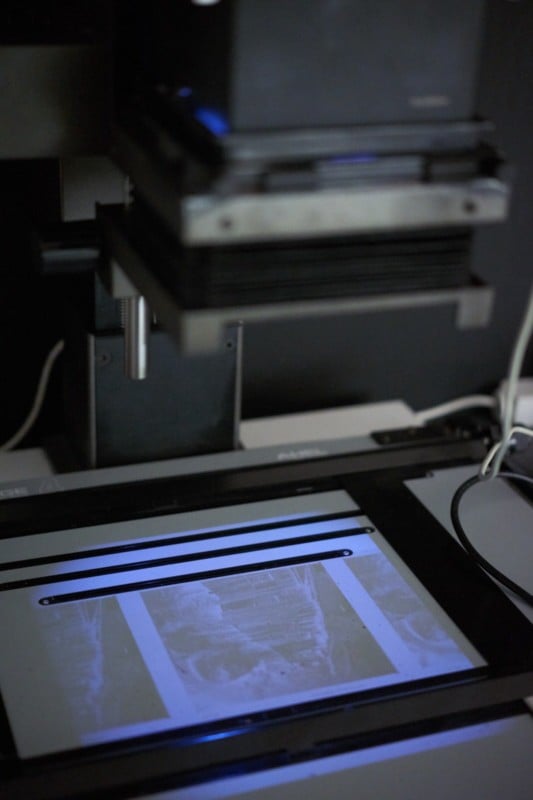 We did not have a 4×5 negative at the point so this is a 6×6 negative. It is bright enough to be seen even with the room lights on. 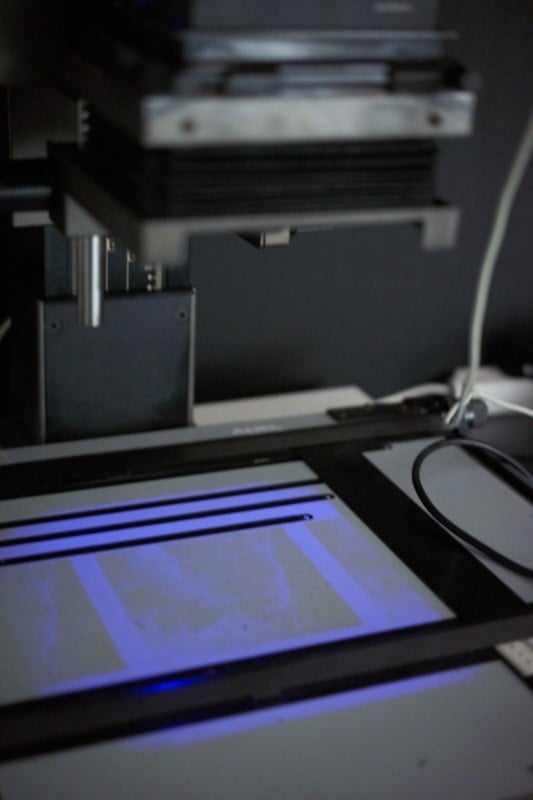 The purple LEDs can be a bit hard on the eyes so while I took this shot with them, we actually turn the red LEDs on at the same time, resulting in a much more pleasing magenta illumination.

One of these is made with an Ilford #5 filter while the other is made with the LEDs. Can you tell which is which? 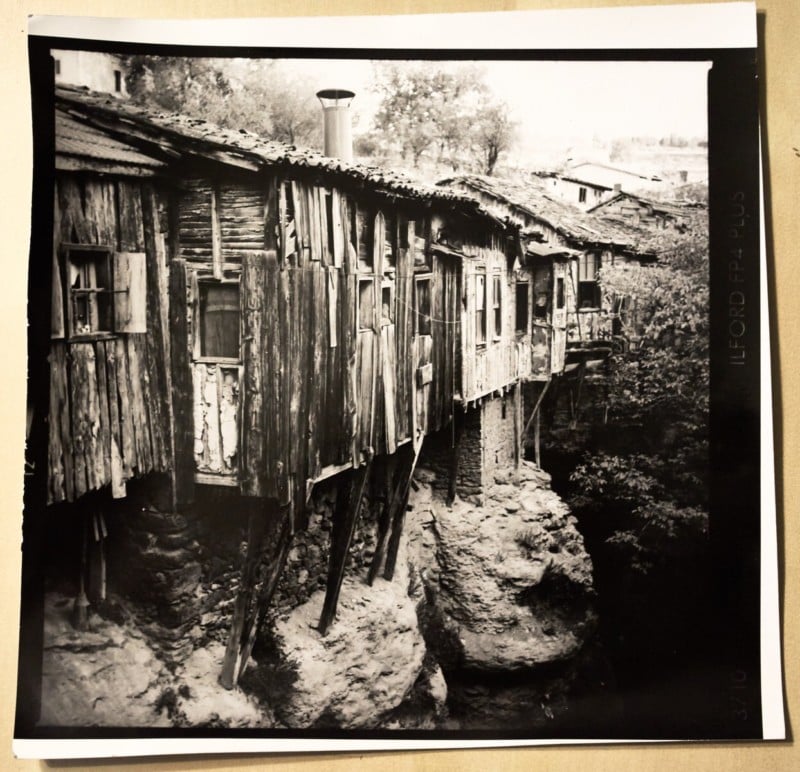 One of the first prints we’ve done.

It was quite a pleasant workflow once everything was put together. I actually built a custom timer for this (using an Arduino Uno we had around) but if we had three light switches mounted on a surface somewhere, this could’ve been used with a standard timer as well.

Here are a few footnotes:

All in all, I’ve quite enjoyed working with the LED light source. Along with the custom-built timer, there is simply no need for any filters. Press the focus button and only the red LEDs are on. Press another button and everything turns on, so you can focus easily. It is so bright that I never needed to open the aperture while working. The exposure times are kept separately for each of the high and low contrast channels and we’ve even come up with a method to do both exposures automatically, so all that is needed to make the final exposure after the initial test strips is a single button press.

It is theoretically possible to set it up for single grade printing between #00 and #5 but so far we’ve only used it for split grade printing. Will experiment with different methods and techniques in the near future.

Next up, I’ll be modifying my Kaiser 6002. Might even build and offer conversion kits for Kaiser V-Series enlargers since all of them have compatible parts, so it should be possible to build a one-size-fits-all solution for them.

About the author: Can Çevik is an industrial designer and film photographer based in Istanbul, Turkey. The opinions expressed in this article are solely those of the author. Çevik is the inventor of MAYA, an advanced darkroom timer. You can find more of his work and photos on Instagram. This article was also published here.

Astrophotography Can Capture Seismograms During Earthquakes