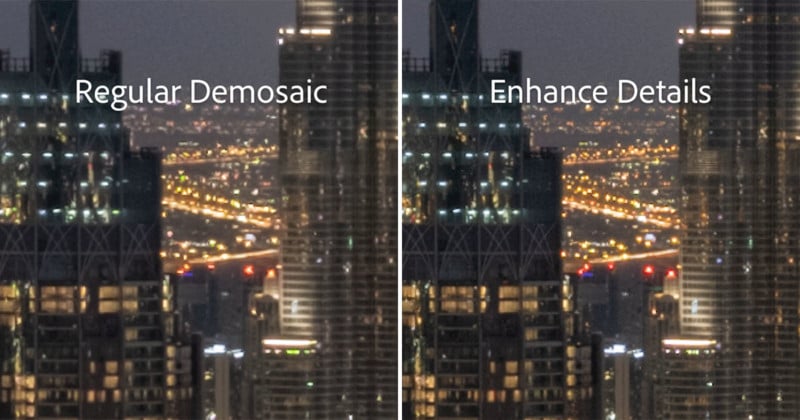 Adobe has announced a new feature for Lightroom and Camera Raw called Enhance Details. It harnesses the power of artificial intelligence to produce more detail and fewer issues in RAW photos.

More specifically, the feature uses machine learning and computational photography to rethink how RAW photos are demosaiced (in which data captured through a digital camera’s array of red, green, and blue pixels are reconstructed into a full-color photo).

Adobe claims that Enhance Details increases the resolution of both Bayer and X-Trans sensor cameras by up to 30%, improving both the fine detail rendering and the reproduction of fine colors.

Here’s a comparison showing a 200% zoom of a photo captured by a Fuji X-Trans sensor — the increased detail can be seen in the street lights and skyscraper windows:

When capturing a photo through a Bayer or X-Trans filter, cameras record a single red, green, or blue light intensity value at each pixel. When calculating what color pixels should actually be in a photo, RAW processors need to guess the most likely value based on the neighboring values (something called interpolating).

And while common “demosaicing” strategies work well in some situations — smooth gradients and constant areas of color, for example — they can struggle and produce less-than-optimal results in others (e.g. textures, fine details, patterns, sharp edges, etc.). 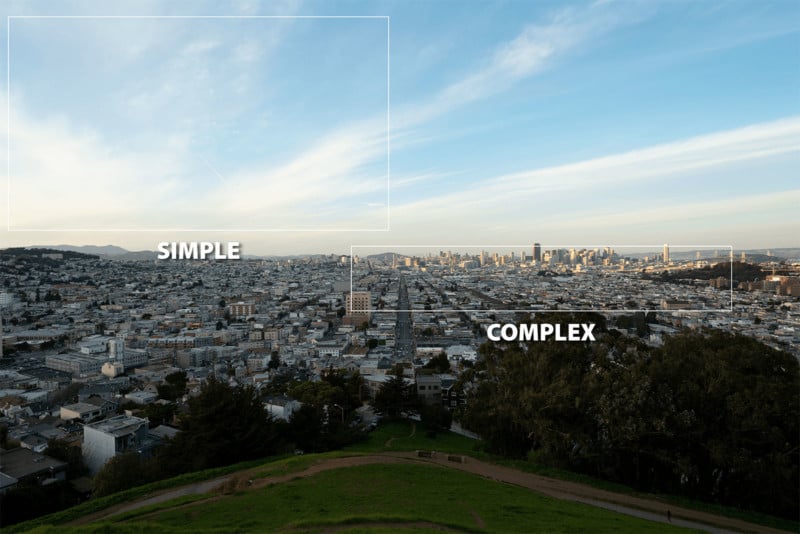 There are advanced demosaicing algorithms out there that can handle these areas of photos well, but running them would take a significant amount of time even on powerful and expensive computers. Thus, RAW processors generally settle for a less-than-optimal result that completes in a reasonable amount of time.

But thanks to the power of AI, that’s now changing. Adobe is putting its Sensei AI engine to work, bringing “deep learning” to the challenge of demosaicing difficult areas in RAW photos.

The company trained its AI on over a billion examples of problematic areas — things like small-scale details, false colors, and zippering (blurring at the edges of photos). The result of this training is the new Enhance Details feature, which produces noticeably more detail than before with fewer artifacts.

To get started with applying Enhance Details to your RAW photos, upgrade your Lightroom CC, Lightroom Classic CC, and Camera RAW to the latest versions released today.