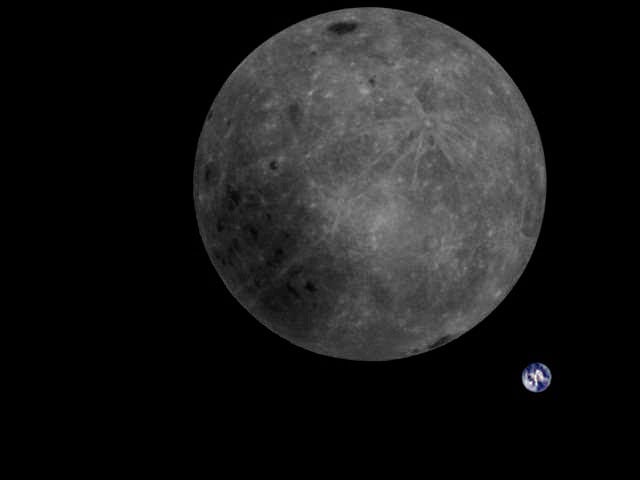 A Chinese satellite currently orbiting the moon has captured a beautiful photo showing both the far side (AKA dark side) of the Moon as well as planet Earth in the background.

The Dwingeloo Radio Observatory in the Netherlands reports that the photo was captured by China’s Longjiang-2 satellite on February 3rd, 2019.

This photo of Earth and the Lunar farside, maybe our best ever, was taken yesterday by the Chinese Lunar satellite DSLWP-B (Longjiang-2). The Dwingeloo telescope downloaded the photo from the satellite this morning. More info at https://t.co/sKt7w9mol9 pic.twitter.com/IsnyvqekTz

The photo above has been color corrected — here’s what the unedited shot looked like:

Team effort: @bg2bhc created and planned all commands, @KuehnReinhard uplinked them to the satellite, the operators of the Dwingeloo telescope, today @cgbassa, @tammojan and @cosmicpudding, downloaded the results. Uncorrected image attached. More next week! pic.twitter.com/Eu4VmC1X7B

Longjiang-2 shot its first photo of the whole Moon and Earth in one shot after waking up from a slumber — China made the satellite go silent while landing the Chang’e-4 probe on the far side of the moon last month so it wouldn’t interfere with necessary communications.

(via Dwingeloo Radio Observatory via The Verge)

Why Aiming for 100 Rejections is Bulls**t