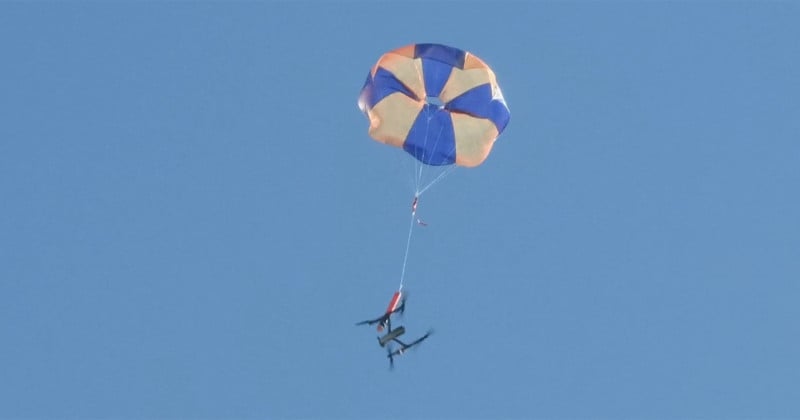 The Alaska-based company Indemnis has announced that its Nexus parachute system for the DJI Inspire 2 drone has been certified as being compliant with a new international standard for drone parachutes, making it the first system to allow for legal flights over crowds of people.

Indemnis partnered with DJI back in 2017 to create a series of industry drone parachute standards for systems that automatically deploy when certain flight anomalies are detected, allowing drones to float harmlessly to the ground instead of violently crash landing.

The Nexus parachute was subjected to a rigorous series of tests at the New York UAS Test Site in Rome, New York, an FAA-designated site managed by NUAIR. Five different failure scenarios were tested in 45 functionality tests over four days:

After passing the tests with flying colors, the Nexus became the first system certified as compliant with the ASTM International F3322-18 Standard Specification For Small Unmanned Aircraft System (sUAS), which DJI, Indemnis, the FAA, and other industry entities worked together to develop.

The Nexus is a tube that’s mounted to drones that’s capable of deploying a parachute within 30 milliseconds at 90mph. It ejects the parachute that’s packed in a shape of a tube with enough force to keep the lines away from the propellers.

“DJI is pleased to have contributed to the development of technologies and standards that will be used to support advanced, higher-risk operations,” says DJI VP Brendan Schulman. “As the FAA works to open more of America’s skies to beneficial drone uses, the certification of the Nexus system on DJI’s platform is a significant step toward making flight over people and crowds routine, expanding the scope of vital applications such as search and rescue, newsgathering, and public safety.”

(via SUAS News via Engadget)

The Move to Mirrorless From DSLRs