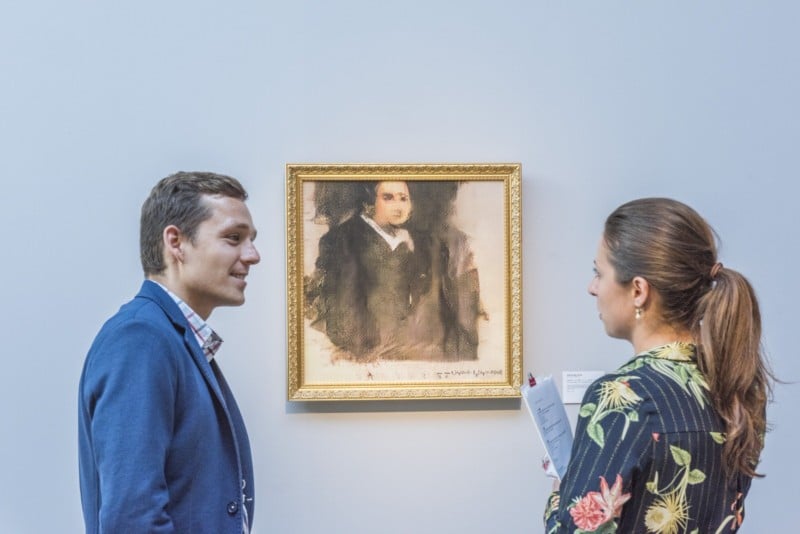 An artificial intelligence-generated portrait has sold for a staggering $432,000 at auction. It was the first listing of its kind by a major auction house.

Bloomberg reports that the artwork was sold at Christie’s in New York on October 25th. Despite only fetching a pre-auction estimate of $7,000 to $10,000, the artwork stunned the art world by selling for 43 times more after a 7-minute-long bidding war between five determined bidders.

The AI was fed 15,000 portraits painted between the 14th and 20th centuries and found on the online art encyclopedia WikiArt. The AI then learned the “rules” of painting portraits by studying the features of all the paintings. After days of learning, it then used what it learned to create new portraits using what it gleaned.

“‘This discovery will eliminate the inferior layers of art,’ ‘The artist runs the risk of becoming a machine, hitched to another machine,’ ‘Painting is dead,’ the collective writes. “To establish some context, all these words have been heard around the year 1850. And they all point at a tool we are quite familiar with: the camera.

The collective says it’s excited about what this latest auction sale means for the future of art as a whole.

“It is an exciting moment and our hope is that the spotlight on this sale will bring forward the amazing work that our predecessors and colleagues have been producing,” it writes in a statement. “We are grateful to Christie’s for opening up this dialogue in the art community and honored to have been a part of this global conversation about the impact of this new technology in the creation of art.”

As AI plays a bigger and bigger role in how photographs are made these days, it appears to be only a matter of time until we start seeing AI-generated “photographs” show up at major auction houses as well.