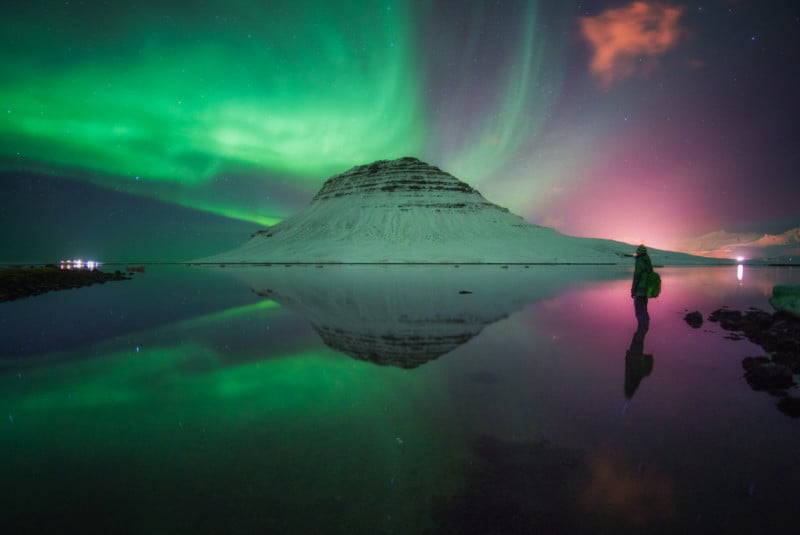 With winter around the corner, I thought I’d write a quick aurora guide. I’m a professional landscape photographer. I also guide lots of photo tours and have done many in the north. I’d like to help all of you out with a bunch of stuff regarding auroras.

Let’s get some facts out of the way first:

The Northern Lights aka the Aurora Borealis can appear all winter long. I get lots of questions from people about when is the ‘best’ time to see auroras. The fact is that it doesn’t matter as long as there is a night sky. Up north it doesn’t get dark in the summer months so you can’t see an aurora. The aurora season basically already starts early September and last till March.

Yes, December and January get very short days up north with only a couple of hours of daylight so you have ‘more’ chance because there are longer nights. But in the end, it all doesn’t matter that much. I have seen crazy auroras in September and October also. I personally prefer October for Iceland as you still have a decent amount of daylight, beautiful autumn colors and aurora chances. 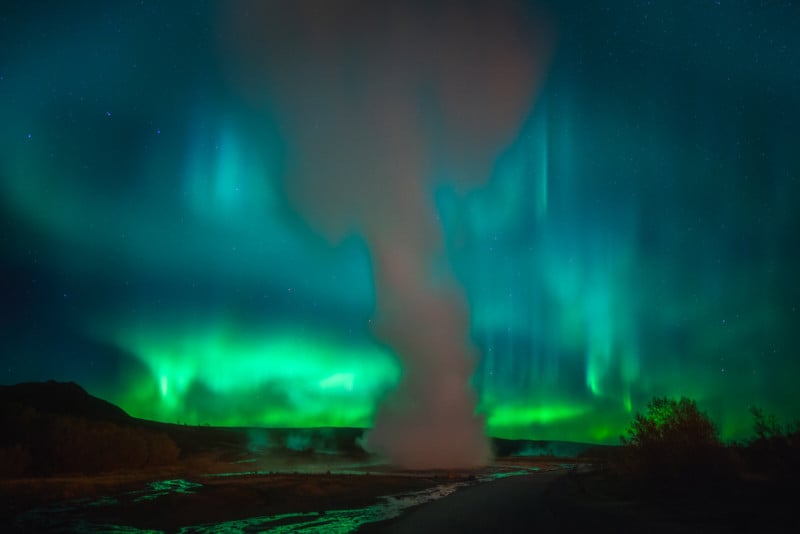 The activity of the Northern Lights can greatly differ. I have heard some people say that auroras are not impressive in real life because they’re just a ‘white’ glow. Well, these people have obviously never seen a really strong aurora because an aurora with extreme activity can really leave you speechless.

A very common aurora is just a faint band in the sky that will render green on your camera, but to the naked eye, it looks kind of boring. But rarer, stronger activity can be amazing. It can dance across the entire skies, create ‘curtains’ as we call them and if it gets really crazy it creates a ‘corona’ which is basically a point in the sky from where everything explodes. It’s super impressive to see and to capture. 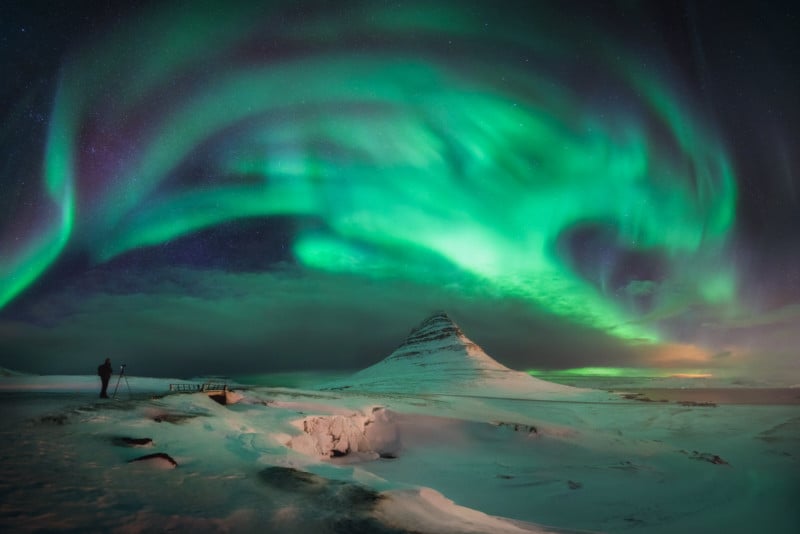 There are lots of apps and websites that predict aurora activity. They are a good indicator but often not really accurate. They’re using a KP-index from 0-10 with 0 being zero activity and 10 being the max. Starting from KP4-5, it’s already extreme. But I have seen crazy aurora with KP2 predictions so take it with a grain of salt. Basically, all you need is a clear sky. Auroras can come out whenever its dark. It can start at 9 in the evening or 2 at night. It’s totally random and impossible to predict. 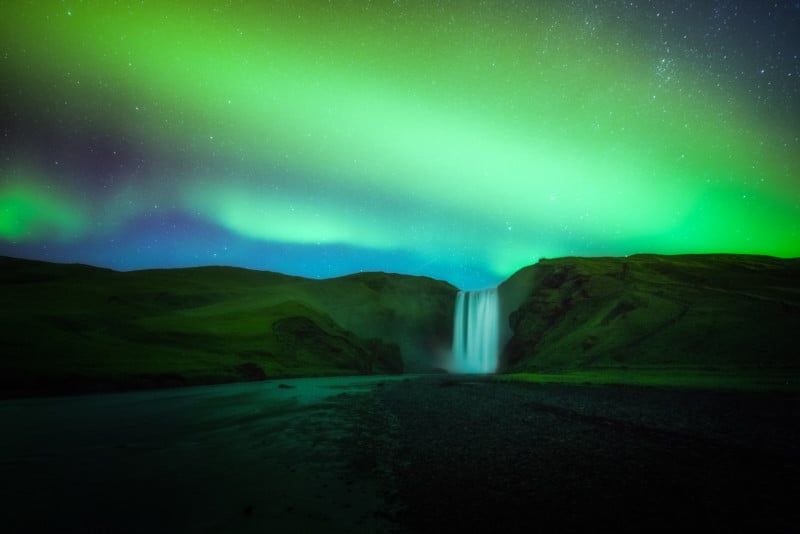 So with these facts out of the way: Where should you go? Basically everywhere up north is alright in the winter months. Common locations are Iceland (where I also guide a bunch of tours this upcoming winter in Feb-March) and Norway (with northern Norway being further north than Iceland) or Northern Canada. They’re all absolutely perfect to witness auroras.

Obviously, you need a camera that you can operate manually. People in photography often say ‘gear doesn’t matter, it’s all about the person’s creativity’ but with night photography and aurora shooting that’s not entirely true. With shooting an aurora you often need to use a higher ISO so if you have a ‘better’ high-end camera you will get images with less noise. because they simply perform better at higher ISO. So a good APS-c or Full frame camera is recommended.

Next, you need a fast lens. To start I would recommend something as wide and as fast as possible. The Samyang 14mm f/2.8 is a great lens. It’s also not that expensive with about $300. Perfect aurora lens.

Another great lens is the Laowa 15mm f/2. Unfortunately it’s only for Sony, but it’s amazing for aurora.

Anything that is a bit wide and fast will do. If you only use a slow lens, you will have to use higher ISO and you will get more noise. 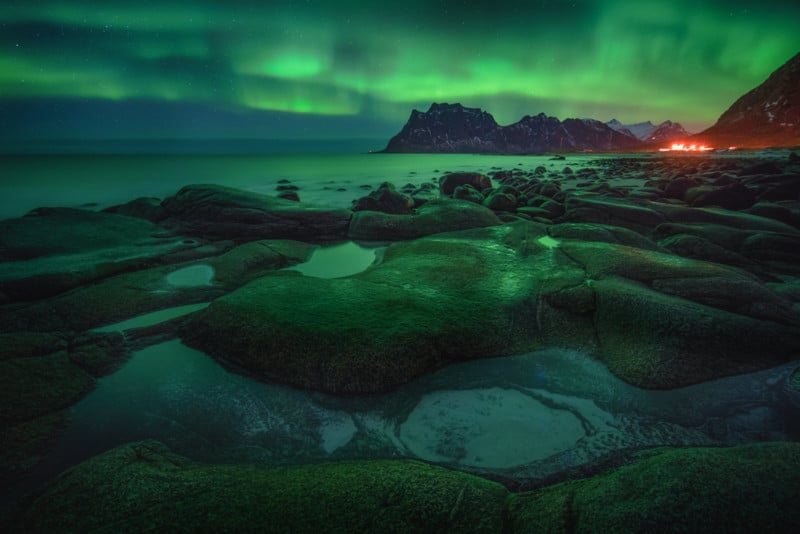 Depending on if there is a moon in the sky and how strong the aurora is, you will shoot around ISO 1600-3200 with a shutter speed ranging from 5-25 seconds with your aperture wide open (f/2.8, or however fast your lens is). It all depends how strong the aurora is and how much moonlight you have to light the landscape. If you have a faint aurora, you will probably use ISO 3200 or higher with about 20 seconds of shutter speed. You can do this because the aurora is not moving a lot.

However, when the aurora starts dancing you want to use a SHORT shutter speed. If you expose for long while the aurora is dancing you don’t capture the detail in the movement of the aurora. So usually, when an aurora gets extreme, use a shutter speed of only 2-3 seconds and you might need a bit of a higher ISO. But if an aurora is really strong, you can even shoot at a lower ISO as it will light the whole landscape.

focusing in the dark can be tricky. Although you can usually just manually or autofocus on a light in the distance. If you’re focused, make sure you lock the focus on manual focus. Do a few test shots and make sure the stars in the shot are perfectly sharp and no blobs. And make sure you recheck your focus from time to time! I once had the focus ring move a tiny bit and ended up with epic aurora shots out of focus. You DON’T want that! If there are no lights around you can manually focus on the infinity sign or use hyperfocal distance (you can find lots of it online). 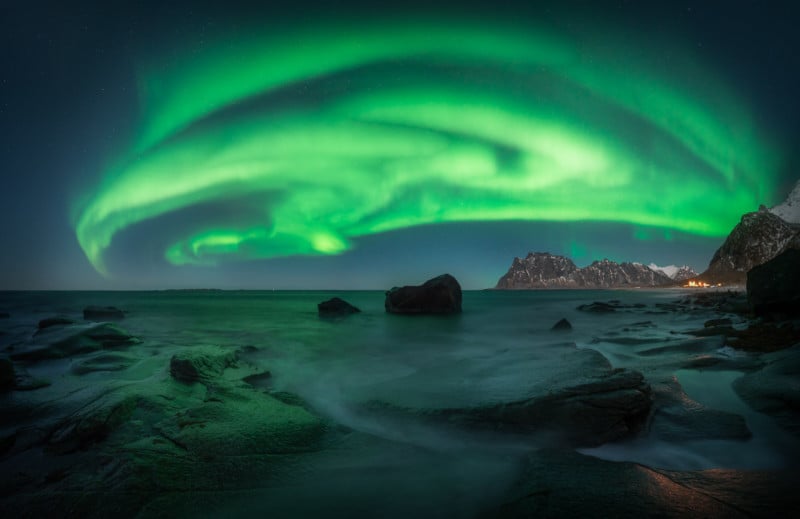 Don’t get crazy when you see an aurora and just shoot the sky. Like always, foregrounds are most important in landscape photography. The aurora should complement your scene. If you see insane coronas, it’s different — you can frame more sky in your shot. But with normal aurora’s foregrounds are very important to make your shot stand out from the rest.

About the author: Albert Dros is an award-winning Dutch photographer and a Sony Ambassador. His work has been published by some of the world’s biggest media channels, including TIME, The Huffington Post, The Daily Mail, and National Geographic. You can find more of his work on his website, or by following him on Facebook and Instagram.

Leica M10-D: A Minimalist Analog-style Body with Wi-Fi Instead of an LCD