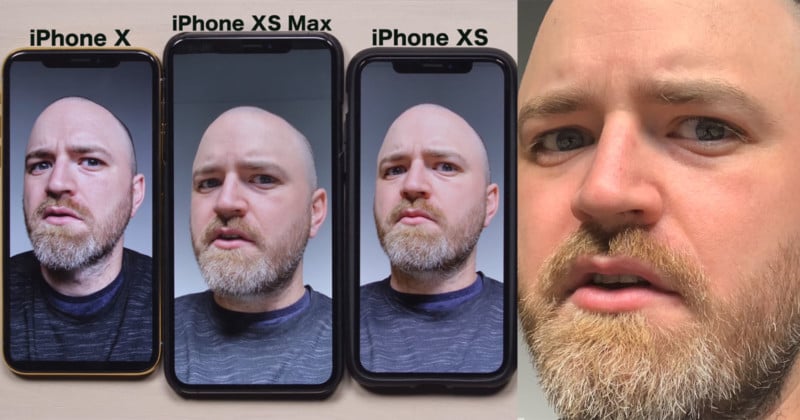 Apple’s new iPhone XS and XS Max are at the center of a new controversy some have dubbed ‘Beautygate.’ The front-facing camera is said to be automatically smoothing skin in selfies, and there’s no way to turn this “beauty filter” off.

On September 25th, a comparison photo shared on Reddit took off and received a considerable amount of attention:

iPhone XS is applying skin smoothing/beauty filter on the front facing camera without telling you and no way to disable it. This is not acceptable. from r/iphone

The next day, Lewis Hilsenteger of Unbox Therapy published this 7-minute video reporting the same issue:

“So it looks like, whatever processing is going on here, with the facial recognition, and this smart HDR and whatever extras are there — because it’s even happening with Smart HDR turned off — is resulting in this almost covert beauty mode, this secret beauty mode,” Hilsenteger says.

Hilsenteger says he originally noticed the auto retouching being applied to his photos before confirming online that others were seeing the same thing.

iPhone XS portrait seems like it’s doing more aggressive skin smoothing. This is straight out of the camera no edit. #wokeuplikethis pic.twitter.com/QB3xhvyTby

Turning off HDR doesn’t make this smoothing go away — there’s currently no known way to avoid it.

Here are several other side-by-side comparisons that have been shared online:

Left is regular selfie on iPhone XS Max, right is portrait mode selfie. Do you guys think it’s over kill on the skin smoothing/beautifying apple is doing with their new portrait selfie mode, or is this a reason to upgrade to the XS? #iPhoneXS #iPhoneXSMax #portraitmode pic.twitter.com/1WOSEjAehi

One of these photos was taken with the iPhone 8 Plus. The other with an iPhone Xs. Neither have any filters applied. Can you guess which is which?

Dear @AppleSupport, please get rid of that automatic and god-awful skin-smoothing effect. pic.twitter.com/b70GSJPPgi

@Advil soo I was watching Unbox Therapy and… #beautygate 😂😂 pic.twitter.com/hj2NcZMicP

Astrophotographer Abdul Dremali, whose comparison went viral, says he reached out to Apple and was told by the company that it’s working on a fix:

i emailed the CEO of Apple about being unhappy with the post-processing on my iPhone XS front camera and they FOUND MY NUMBER AND CALLED ME ABOUT IT LMAO. they’re working on fixing it now this is hilarious pic.twitter.com/xbRYe3wU1b

i emailed the CEO of Apple about being unhappy with the post-processing on my iPhone XS front camera and they FOUND MY NUMBER AND CALLED ME ABOUT IT LMAO. they’re working on fixing it now this is hilarious pic.twitter.com/xbRYe3wU1b

The differences aren’t as noticeable in well-lit conditions, leading some to believe that the “beauty mode” is actually the result of noise reduction being applied to photos.

“We set a reference frame and fuse in information from multiple frames,” Apple software VP Sebastien Marineau-Mes explains to Lance Ulanoff. “As you stack the frames, if you have the same image, you have lower and lower noise and better and better detail.”

But this seems to only apply (or apply more) when a face is detected in the frame (something we also found in our own tests):

I wanted to show you guys the issue with the #iPhoneXS camera taking these distorted colours and smoothing filter. The walls behind me are PURE WHITE. Left is to show you how it completely changes my skin tone and right shows the tones when a face isn’t recognized. 1800? NOT OK. pic.twitter.com/Rt99zAVRuF

If this strong skin smoothing is indeed the result of new noise reduction being applied to selfies (a likely explanation), then Apple may want to rework its algorithms to bring the results more in line with what the iPhone X captured.