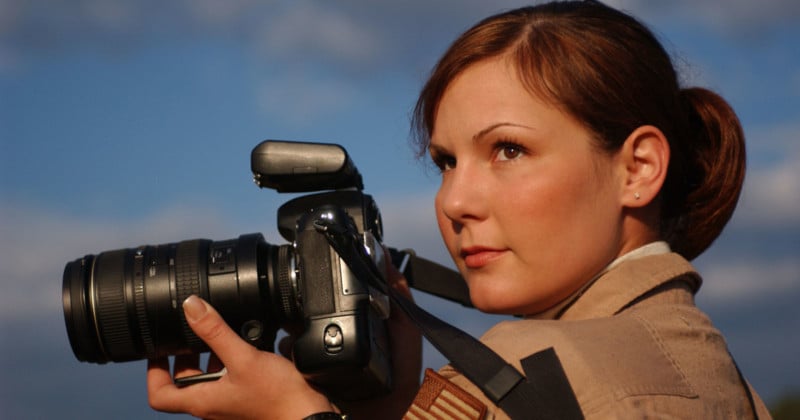 In the last couple of years (has it really been that long?) we’ve been hearing revelations of the trials of female photojournalists. Nothing, unfortunately, too unexpected. Every time around someone writes another version of the standard essay on this topic covering much the same appalling ground every time. See, for instance, this recent iteration.

Women in the field of photojournalism are routinely harassed, hit on, and groped by their senior male colleagues. The managers who assign journalists to assignments are loathe to assign women to this story or that, for reasons that are at best vague and at worst perfectly clear. Many women graduate from school trained as photojournalists, and very few are able to make a career out of it.

As I say, this is expected. Depressing, but expected.

The standard essay, written every few months, covers all this ground. It’s a pretty burly argument. Women have a right not to be fondled on the job, or at job-related events. If this argument doesn’t cover it, we’re probably in the territory where no argument is going to make much impact. Right? I mean, is anyone actually willing to stand up and say that these things are OK?

Unfortunately, the standard essay never seems to stop there.

The point is raised that photojournalism is, to a large degree, performed by white men, and therefore reflects a white male viewpoint. So far, so good, that seems very reasonable. The next step, though, is to assert that women’s photographic voices are inherently different and that by having more women doing photojournalism, we would see different pictures made in different ways about different stories.

The first problem which arises is that there isn’t much evidence that women do in fact shoot much differently than men do. Insofar as there are differences, it is at least in part due to the pressures on women to take those specifically female pictures. We see lots of baby pictures made by women. This is an acceptable genre for women to work in, for myriad reasons, and so it is dominated by women. Men can do it too, though.

Most pictures of explosions are taken by men, not because women can’t do it just as well, but for social reasons very much related to those that cause the baby photo business to be dominated by women. In the early days of advertising photography, when women were employed it was invariably to shoot “those female things” like soap, cleaning products, fabrics, sewing supplies, and so on.

Robert Capa (male) and Gerda Taro (female) shot the Spanish Civil War together, and there’s considerable confusion about who shot what. Enough confusion, at any rate, to suggest that the female photographer’s work is not easily distinguished from the male.

Examine these two photos, ‘Refugees from Málaga, Murcia, Spain’ and ‘Republican Soldiers’ taken during Taro and Capa’s coverage of the Spanish Civil War: 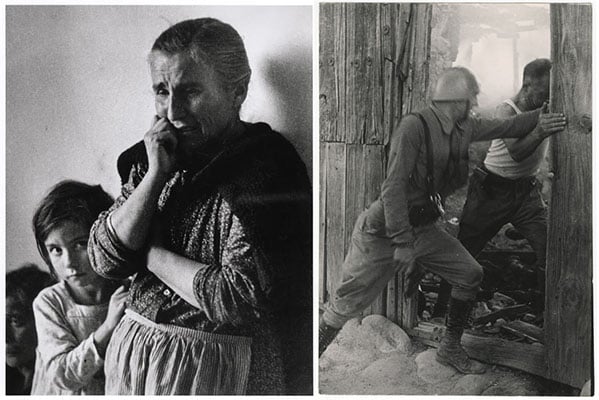 If you were to guess, you might imagine that the photograph of robust men, one in uniform, thrusting open a doorway was Robert Capa’s, the man’s, and that the warmer photograph of the refugees would be Gerda Taro’s. But that is to reverse the situation — Capa shot the intimate one, and Taro the other.

Let’s not confuse a single example with truth, of course. The point is not these particular two people, it is not this picture or that one. The point is rather that across all of photography it isn’t easy to distinguish the men from the women, and when you can, like as not there was some editor assigning women to shoot soap and men to shoot cars. Photographers influence one another at a furious pace, men influencing women and vice versa. This influence, together with individual style, seems to almost completely obscure any gender differences.

The second, and to my mind more serious, problem that arises is the risk of saddling would-be female photojournalists with some sense of obligation to be the voice of women. Arguably, the standard essay on women in photojournalism pressures women to stick to “those female things.”

Women can shoot explosions, violence, and death, those so-called white male topics, just as well as men can.

“Corpsman in Anguish,” shot by Catherine Leroy in Vietnam, is a pretty important picture. Is there something inherently “female” about this picture? Not that I can discern.

While I think it is vitally important to bring cultural problems of harassment and assault to light, I think also we must be wary of perpetuating a different set of flawed ideas as we do so.

Having more women in photojournalism would be good — it would add new voices, new viewpoints. But let us not suggest that women can’t photograph explosions, or that men can’t photograph sewing supplies. They can. They do. And they ought to keep on doing it.

Author’s note: Thanks to the editorial team at PetaPixel for their work making several improvements and corrections to this piece.

About the author: Andrew Molitor writes software by day and takes pictures by night. The opinions expressed in this article are solely those of the author. Molitor is based in Norfolk, Virginia, and does his best to obsess over gear, specs, or sharpness. You can find more of his writing on his blog. This article was also published here.

The GoPro HERO is Actually a HERO5 with ‘Crippled Firmware’: Report

Do You Know Your Top 5 Photographs?