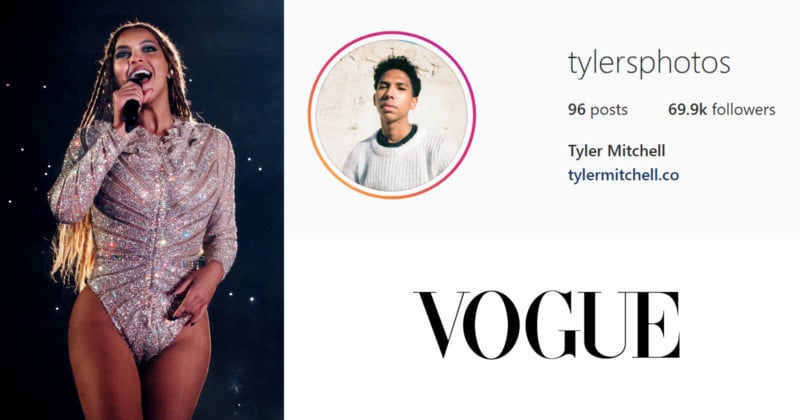 For the first time in the 125-year history of the iconic fashion and lifestyle magazine Vogue, a black photographer will be behind the photo that graces the cover, according to a new report.

HuffPost reports that Vogue editor-in-chief Anna Wintour has given superstar singer Beyoncé “unprecidented control” of the cover for the September issue of the magazine, and that Beyoncé decided to hire 23-year-old New York-based photographer Tyler Mitchell to shoot her portrait.

“Wintour has always exerted complete control over the fashion bible, including selecting the outfits worn by cover models,” HuffPost writes. “Cover subjects are usually given little to no say in their photos and are sent the cover in the week ahead of publication […]”

“The reason a 23-year-old black photographer is photographing Beyoncé for the cover of Vogue is because Beyoncé used her power and influence to get him that assignment,” a source tells HuffPost.

Beyoncé was also featured on the cover of the September issue in 2015 in a photo shot by Mario Testino. Testino was dropped by Vogue earlier this year after sexual abuse claims against him. And just two months prior, photographer Terry Richardson was banned by Vogue for exactly the same reason.

Mitchell graduated from New York University’s Tisch School of the Arts and settled in Brooklyn after being raised in Atlanta, Georgia. His work has previously appeared in publications such as Teen Vogue, Vogue US, The Fader, Office Magazine, and The FADER. He has also shot for clients that include Mercedes Benz, Marc Jacobs, Nike, Converse, and Ray-Ban.

#EmmaGonzalez, Sarah Chadwick, Nza-Ari Khepra, and Jaclyn Corin. The new faces of gun reform by me for the cover of @TeenVogue

The Moroccan sun, the lush optimism, and the Dream. For the new @moreorlessmag by @jaimeperlman

While many are cheering the news of Mitchell making history with his cover photo, others are seeing it as a sign that more progress still needs to be made in the photography and fashion industries.

“There is and has been a trend for diversity in fashion,” writes photographer David Uzochukwu at The Guardian. “But it is a trend. When you have a black and brown model in front of the camera, almost all of the time, there is a white person behind the lens. That we have got used to it is even sadder. […]

“This moment, Tyler’s Vogue cover, it’s a good sign and of course it matters to young talent of color – it’s encouraging. But it’s not just Vogue that has taken this long – the entire fashion industry is backwards. There is still a long way to go.”

Shooting a Sunrise Portrait with a Drone-Mounted Flash

How I Shot a Light-Painting Levitation Portal Photo