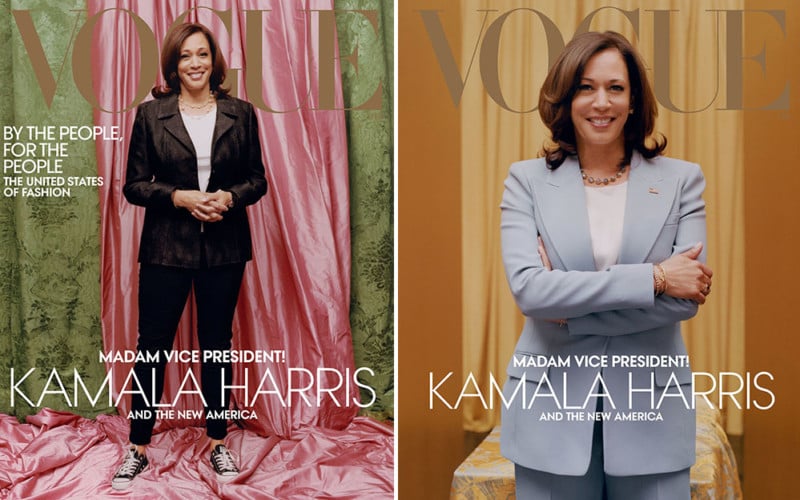 The iconic fashion magazine Vogue has come under fire over Vice President-elect Kamala Harris’s cover photo on its February issue. Critics are saying Harris, the first person of color to hold the high office, has been disrespected by whitewashing and putting her in Converse sneakers.

Making history was the first step. Now Harris has an even more monumental task: to help heal a fractured America—and lead it out of crisis. Read the full profile: https://t.co/W5BQPTH7AU pic.twitter.com/OCFvVqTlOk

Vogue posted two covers on their Twitter account. In the first, Harris dons a powder-blue Michael Kors pantsuit with a flag-pin on her lapel. The second was the one that got people all riled up. Here the Vice President-elect is seen full length in a casual black jacket and pants, wearing matching Converse Chuck Taylors with pearls around her neck. She poses against a pink and green backdrop as a nod to her Alpha Kappa Alpha the first historically African American sorority.

The cover with the casually dressed Veep-to-be in a black jacket was leaked Saturday night at 9 pm by fashion-focused Twitter handle Models Daily.

A controversy started overnight as to whether this photo was vice-presidential. The objections were numerous, like lightening her skin tone, bad lighting, Converse sneakers’ casualness, crumpled background, etc. It just did not look the quality of a slick Vogue cover that everybody was used to. After all, a fashion magazine should have a fashionable portrait on the cover!

David Hobby, a former photojournalist at The Baltimore Sun, when he first saw the posting thought the cover was a fake as it “is so bad.”

This @voguemagazine cover of Kamala Harris is so bad, I assumed it was a fake.

Tweets started flying fast and furious on Sunday morning, demanding answers and some even asking for a reshoot.

Yashar Ali, a New York Magazine/HuffPost contributor, claimed Sunday that “according to a source familiar with the publication plans,” Kamala Harris’ team had okayed the photo in the light blue suit.

“That was the cover that the Vice President-elect’s team and the Vogue team, including editor in chief, Anna Wintour, mutually agreed upon…But the much-maligned cover [in the Converse sneakers] has already gone to print [in Dec] and will be the cover available for sale and sent to subscribers,” Ali says.

“No one gets to approve a cover, even its subject, and the magazine decided which image to use for print and digital,” a Vogue source told The New York Post. “Vogue selected the image for the print cover that we felt captured her personality and authenticity. Obviously, we love both images and are celebrating both covers digitally.”

“A spokesperson for Vogue did not comment on the discussions between the magazine and the Vice President-elect’s team but said in an emailed statement that Vogue ‘loved the images Tyler Mitchell shot and felt the more informal image captured Vice President-elect Harris’s authentic, approachable nature’,” reports CNN.

Tyler Mitchell is the photographer behind both the covers. HuffPost reported that Wintour had given superstar singer Beyoncé “unprecedented control” of the cover for the September 2018 issue and that Beyoncé decided to hire 23-year-old New York-based photographer Tyler Mitchell to shoot her portrait.

For the first time in the 125-year history of the iconic fashion and lifestyle bible, a black photographer was behind the photo that graced the cover. That cover is today a classic.

Mitchell had wanted to “honor Harris’s college days and the powerful women who comprise the ranks of sororities like Alpha Kappa Alpha,” said Vogue. “With this cover shoot with Madam Vice President-Elect Harris, I [Mitchell] wanted the set design to pay homage to that history, to her status as an AKA, and Black sororities and sisterhoods worldwide.”

The article also goes on to say that Vice President-elect’s styling choices “were her own” and that the image “reflects Harris at her casual best: Converse sneakers and Donald Deal blazer.” This article posted today on Mon, 11, seems to respond to all the commotion that has erupted yesterday on social media.

In the full-length casually clothed pose where she sports a black blazer, skinny jeans, and white tee, she matched her oft used Converse lo-tops. These Converse shoes have been pointed out as inappropriate in the critiques to the photo. In middle Nov, Vogue did a piece on How Kamala And Her Converse Rewrote The Rule Book On Political Style. It was reported then that “Like pretty much no other woman before her, Kamala Harris has spent much of her time on the campaign trail wearing trainers.”

There is a close up of her trainers with 2020 and a heart symbol emblazoned in the same article. “Like pretty much no other woman before her, Harris has spent much of her time on the campaign trail wearing Converse – and now we will have the pleasure of seeing Harris’s Chuck Taylors in the West Wing,” comments Vogue. So, there is no doubt that she does like her Converse Chucks!

And what about the pearls around her neck? When Kamala Harris accepted the Democratic vice-presidential nomination, she paid tribute to her Alpha Kappa Alpha family. Harris’ bond with AKA is so strong that she always wears as a symbol of solidarity with her sisters: pearls. When she graduated from Howard University, she wore a pearl necklace, and she’s worn pearls for all her important public engagements. When she gave her first press conference with Joe Biden in Wilmington, Delaware, on August 12, 2020, she wore pearls.

“Washed out mess of a cover” was the story title in The Guardian, quoting Twitter user E. Vaughan.

Kamala Harris is about as light skinned as women of color come and Vogue still fvcked up her lighting. WTF is this washed out mess of a cover? pic.twitter.com/5O2q0axA0G

Playwright and lawyer Wajahat Ali also used similar language and described it as a “mess up,” adding that Wintour “must really not have Black friends and colleagues.”

What a mess up. Anna Wintour must really not have Black friends and colleagues. https://t.co/8oCpEPkltU

Besides the lighting, which seems to be the strongest complaint, some have noted that the image is not sharp. Another argument is the pose, carelessly placed and crumpled background fabric, and the casual styling do not do justice to a person who is about to hold the second-highest office in the land.

Is this a joke ?! The Kardashians get more respect from Anna Wintour for Vogue covers than VP elect! What a poor representation of woman of color in power! Travesty

Folks who don't get why the Vogue cover of VP-elect Kamala Harris is bad are missing the point. The pic itself isn't terrible as a pic. It's just far, far below the standards of Vogue. They didn't put thought into it. Like homework finished the morning it's due. Disrespectful.

Vogue‘s Editor in Chief since 1988, Anna Wintour Wintour, has also come under fire, with some even demanding her resignation at Kamala Harris’ fashion failure.

The New York Times disclosed an internal email Ms. Wintour had sent on June 4. Last year, “I want to say plainly that I know Vogue has not found enough ways to elevate and give space to Black editors, writers, photographers, designers, and other creators,” wrote Ms. Wintour, the Vogue editor in chief since 1988 and Condé Nast’s artistic director since 2013, making her the editorial leader of all its titles.

This was followed in September 2020 with an issue that was different. It was 316-pages titled “Hope,” and it for the first time featured a majority of Black artists, models, and photographers.

Vogue has set standards in the fashion and beauty industry. London-born Dame Anna Wintour DBE “has helped set a standard that has favored white, Eurocentric notions of beauty,” says Edmund Lee in the NYT. In December, Wintour was promoted to become the first-ever chief executive of Condé Nast, in addition to her roles as Vogue Editor-in-Chief and Condé Nast artistic director. This new title gave her control over all of the publication’s 25 editions across the globe.

So, what went wrong this time? Was it just that the wrong or other photo was selected?

Were this casual pose and garb and crumpled background good for Beyoncé but not appropriate for the first woman of color to hold a Vice President’s office? Interestingly, Mitchell has posted only the blue-suited photos to his Instagram and not the much-maligned casual one on the print cover. It reads, “Madam Vice President-Elect Kamala Harris by me and the team for the cover of American Vogue February issue.”

Harris and her team have not so far commented on the selection of the photo for the cover, although the word on the street is that they were blindsided and would have preferred the more formally dressed VP to grace the print cover.

Robin Givhan, senior critic-at-large at The Washington Post, sums the problem very aptly: “A bit of awe would have served the magazine well in its cover decisions. Nothing about the cover said, Wow.”

Update on 1/23/21: Vogue has finally taken action on their choice of print edition cover photo of Vice President Kamala Harris for the February issue. While they cannot redo the entire order, they have decided to add a limited number of issues with the more formal photo in a blue suit as well. The main print edition will have the informally attired VP in Converse sneakers.

“In recognition of the enormous interest in the digital cover, and in celebration of this historic moment, we will be publishing a limited number of special edition inaugural issues,” Vogue wrote on its website.

This release of the limited version has occurred about one week after Anna Wintour, editor in chief, defended the casually dressed VP Harris cover. Wintour denied reports that she and Vogue had agreed to a specific image for the print cover with Harris’ team.

Earlier, Wintour, discussed the outrage on social media to the selection of the print cover photo, which was characterized as disrespectful to the office of the VP.

“Ms. Wintour said in a follow-up statement to Sway*, ‘Obviously we have heard and understood the reaction to the print cover and I just want to reiterate that it was absolutely not our intention to, in any way, diminish the importance of the vice president-elect’s incredible victory’,” reported The New York Times on January 12.