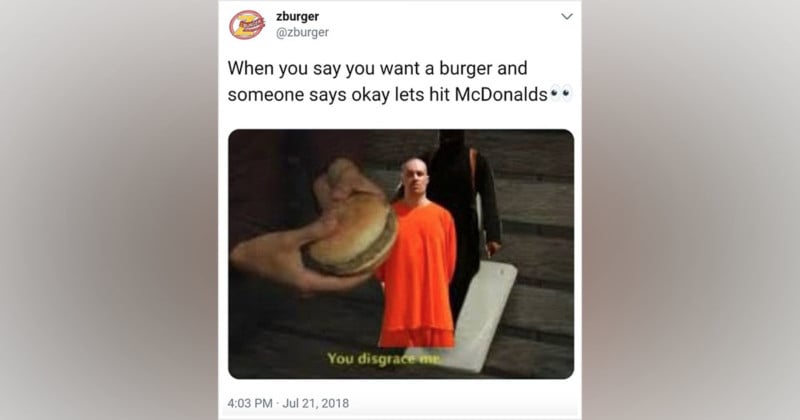 The Washington DC burger chain Z Burger is apologizing this week after it used a picture from photojournalist James Foley’s beheading to promote its food.

Last Saturday, Z-Burger posted a Tweet (shown above) with the words: “When you say you want a burger and someone says okay lets hit McDonald’s 👀.” And underneath was a composite image of a burger next to an image of Foley from his 2014 execution video, shortly before he was beheaded by ISIS. The caption reads: “You disgrace me.”

James Foley was an American photojournalist who was abducted in 2012 while covering the Syrian Civil War. He was beheaded in 2014, becoming the first American citizen killed by ISIS, and the video of his murder made international headlines.

Needless to say, people were enraged by Z-Burger’s use of Foley’s image in a burger ad. Z-Burger quickly took down the ad and Tweeted an apology by owner Peter Tabibian.

A message from our owner – Peter pic.twitter.com/09yMYBYBHK

“An apology has been sent to some of you from a contracted marketing company over an unfortunate incident, a post in very poor taste that was not approved by me before being uploaded to our Twitter account,” Tabibian writes. “[…] I have taken immediate steps to ensure that this never happens again […]”

Tabibian placed the blame for the ad on the contracted marketing company Z-Burger used, which was Valor Media, run by 23-year-old social media influencer Michael Valor.

Valor himself posted a series of video apologies to Twitter:

Valor says that the offensive Tweet was the work of a new art director that his company recently hired and that it wasn’t created with ill intentions.

Both Z-Burger and Valor have since pledged to make donations to the James W. Foley Legacy Foundation, which advocates for the safe return of Americans detained abroad, to protect independent conflict journalists, and to educate regarding threats to freedom.

Foley’s mother, Diane, expressed her sadness at the original Tweet but says she’s looking forward to receiving the donations:

I am very saddened that @Zburger would be so insensitive and ignorant of others’ pain while marketing their hamburger.

I look forward to hearing an apology from Peter Tabibian and Michael Valor and their promised donation to the foundation #inspiring moral courage.

Valor says he has since had “open-hearted conversation” with Diane and that his company will be sponsoring the foundation for future events.

How My Photo Went from Reddit to the Walls of NASA