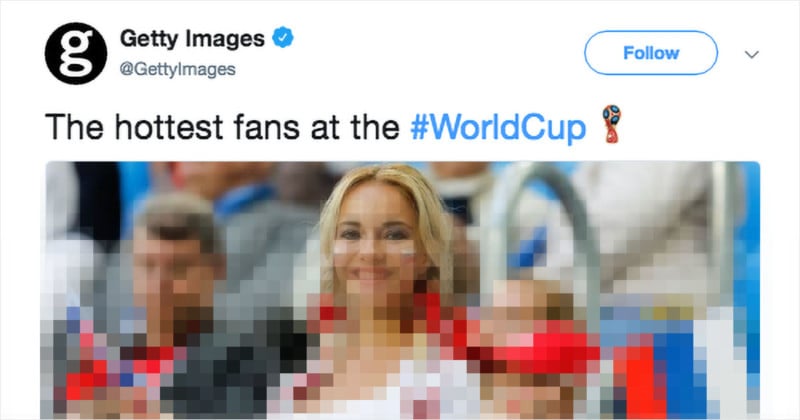 Getty Images has apologized for publishing a photo gallery titled, “World Cup 2018: The Sexiest Fans,” containing photos of attractive female fans spotted during World Cup matches. The set was quickly deleted from the Internet after its publication sparked an outcry.

“The hottest fans at the #WorldCup,” Getty Images wrote in a since-deleted Tweet promoting the gallery, which featured the sub-heading, “Talk about a knock-out round…”

Both individuals and organizations quickly began voicing their displeasure at the photos, calling them “misogynistic.”

Getty Images abruptly deleted the gallery from its website, replacing it with an apology from the editors.

“Earlier, we published a piece, ‘World Cup 2018: The Sexiest Fans,’ that did not meet our editorial standards,” the message reads. “We regret the error and have removed the piece. There are many interesting stories to tell about the World Cup and we acknowledge this was not one of them.”

The Guardian reports that the women in the photos were not asked permission to be featured in the way that they were, and that Getty Images has launched an internal investigation into this photo gallery.

“Getty Images holds a deep belief in the power of visuals to incite change and shift attitudes and we have done, and will continue to do, much work to promote and create a more evolved and positive depiction of women,” the photo agency tells The Guardian.