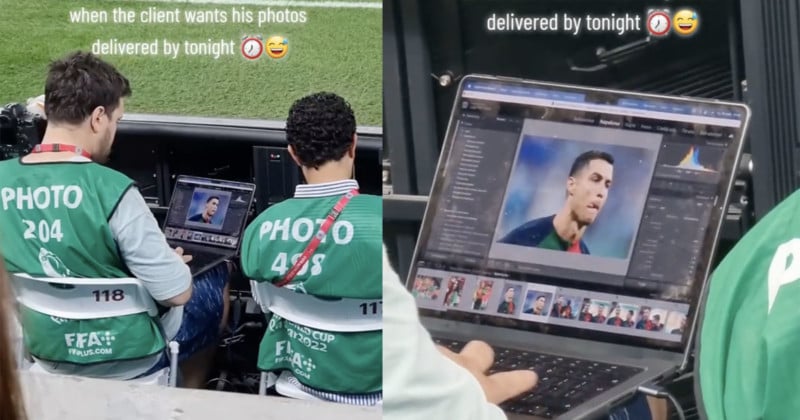 Social media users have been left amazed by the sight of a World Cup photographer using his trackpad to quickly edit pictures of Cristiano Ronaldo.

The viral video shows a photographer expertly and swiftly cropping a photo of soccer player Ronaldo from the sidelines of a match at the FIFA World Cup in Qatar.

Mehrez posted the clip with the caption: “when the client wants his photos delivered by tonight.”

In the video, the photographer only uses a trackpad on his laptop, instead of a mouse, to edit the photo of the Portuguese soccer team into a tight close-up of Ronaldo’s face.

Using Adobe Lightroom, the photographer crops the photograph into a final, striking portrait of the world’s most famous soccer player.

The clip amassed 6.7 million views and hundreds of comments.

Social media users were left astounded by the photographer’s excellent editing skills — using just a trackpad on his laptop.

“It’s amazing how they make do with it without using a mouse,” a TikTok viewer writes. “So inconvenient but great skills there.”

A stunned user could not believe the photographer edited the picture on his trackpad: “They do it without a mouse???”

“Woah he didn’t use a mouse, I could never,” another user comments.

Many TikTok users were staggered by how quickly the photographer edited the picture.

“I’d have it done in like 3 weeks,” a viewer humorously remarks.

“Photographers are seriously so talented,” another TikToker says.

“Have a look on Getty Images, photos go up within minutes of them being taken,” an individual tells other viewers in the comments.

It is no secret that professional sports photographers have super quick editing skills.

Sports photographers have been producing stunning pictures under tight deadlines for years. But for Generation Z viewers, the World Cup 2022 may be the first time they have witnessed their incredible skills at a huge global sports event. And this may be a big reason behind the video’s popularity on TikTok.

Several TikTok users were also curious about what the photographer was using for editing software and were unfamiliar with Adobe Lightroom.

With the rise of artificial intelligence (AI) photo editing apps, younger viewers may not be used to the old-school and far more manual software used by professional sports photographers.