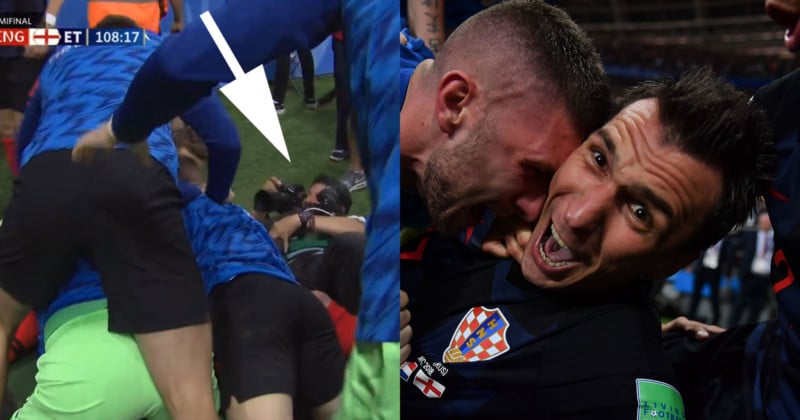 AFP photographer Yuri Cortez was shooting the World Cup semifinal yesterday when he got much closer to the action than he expected. After Croatia scored its go-ahead goal in extra time, the celebrating players knocked Cortez over and piled on top of him. In the midst of the chaos, Cortez kept shooting.

#CRO piled on top of the photographers after scoring a huge extra time goal pic.twitter.com/FPaDQoEepn

The Croatian players politely apologized to Cortez after the dogpile, and one even gave him a kiss on his head.

Team Croatia apologizes to photographers after accidentally trampling them celebrating a goal in the #WorldCup pic.twitter.com/FMlkr0cIyE

Cortez was seen on TVs around the world snapping off close-up photos as his head peeked out from under the dogpile.

Other photographers in the area also captured the incident and Cortez at work as a true professional:

Cortez was rewarded for his efforts, as his resulting photos from under the pile have begun going viral online today:

Cortez posted this slideshow on Instagram sharing some of his other shots from under the pile:

“I was just changing my lens as the players ran towards me,” the Mexico-based Cortez tells AFP. “They just kept coming towards me and they fell on me! It was a crazy moment, they were delighted. Then they suddenly realized that I was underneath them. Then they asked me if I was OK. Another one picked up my lens and another player (Domagoj Vida) gave me a kiss.”