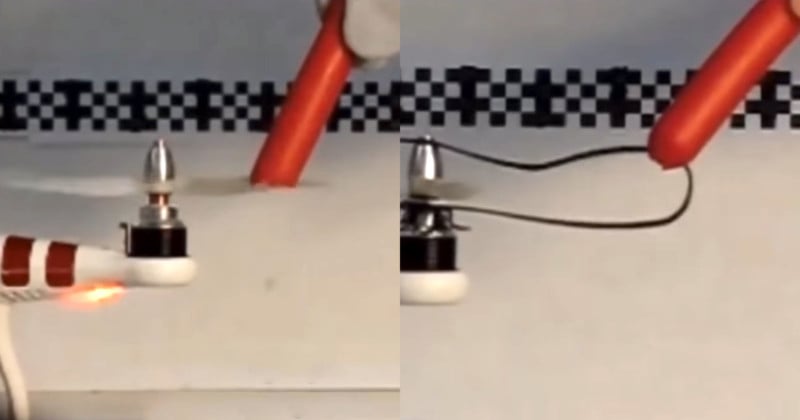 The rotors on camera drones can do serious damage to human flesh if the two come in contact. Researchers are working on a new flesh sensor that would stop a rotor so fast that an approaching finger can be spared from harm.

If the concept of detecting flesh and stopping a spinning blade sounds familiar, it’s because similar technologies already exist. In the world of table saws, the company Saw Stop uses a sensor that puts the brakes on a spinning saw blade in less than 5 milliseconds. Even if you push your finger into the blade quickly, the most damage you’ll receive is a relatively shallow nick.

Now researchers at the University of Queensland in Brisbane, Australia, are working to bring this concept to the world of drones. Their Safety Rotor is a drone sensor system that has a flesh-detecting sensor spin with the rotor.

And like with the Saw Stop, the Safety Rotor is being demoed using a hot dog as a finger substitute. In tests, the sensor hoop only caused light marks on the hot dog and the rotor was completely stopped by the time the “finger” reached its plane. When the test was done on a standard drone rotor, the “finger” was completely destroyed.

Here’s a 2.5-minute video that introduces and explains the Safety Rotor’s technology:

The scientists say that the Safety Rotor system would only add about 22g (0.78oz) of weight and $20 of cost to a drone. No word yet on if or when we’ll see this type of system actually appear in consumer drones.

(via IEEE Spectrum via TechCrunch)