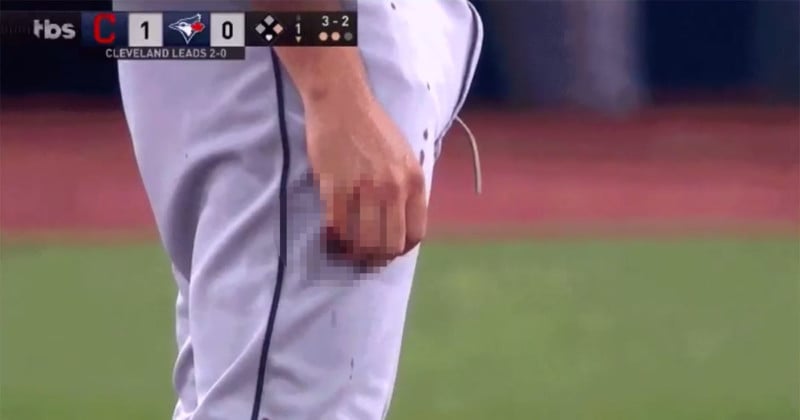 The popularity of camera drones has been exploding in recent years, but so have drone-related injuries — spinning propeller blades can do serious damage if they come in contact with human flesh. Case in point: a starting baseball pitcher had to exit the biggest game of his baseball career yesterday after his finger started bleeding profusely from a drone-related injury.

Warning: There are videos and images below that show Bauer’s injuries.

Cleveland Indians starting pitcher Trevor Bauer was pitching Game 3 of his team’s playoff series against the Toronto Blue Jays yesterday when a serious cut on his right hand pinky finger began to drip blood like a leaky faucet.

Bauer had been scheduled to pitch in Game 2 on Saturday, but last week he suffered a freak drone accident that made him ineligible. The pitcher explained at a press conference that building and flying drones is a huge hobby of his, and that the injury occurred as he has making repairs on his homemade racing camera drone. As he plugged the battery into his drone, one of the 4 propellers suddenly (and without explanation) began spinning up at full throttle. Bauer’s pinky was in the way and received a serious gash.

Apparently the team doctor’s felt that the injury had healed enough for Bauer to take the mound last night, but after just 3 batters in the first inning, TV cameras showed that Bauer’s swollen and bloody finger had begun bleeding uncontrollably.

Bauer was pulled from the game — his team went on to win, though — and the incident put the spotlight on the dangers of camera drones in a nationally televised way.