Here’s an old-ish video that’s been making the rounds again lately (viral videos are like viruses — they don’t go away very easily). Titled “Camera shutter speed synchronized with helicopter blade frequency,” it shows what can happen when your camera is synchronized with the RPM of a helicopter’s rotor blades. The resulting footage makes the helicopter look as though it’s just floating in the air! 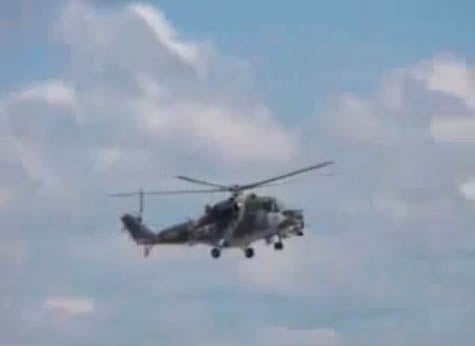 Photographer Chase Jarvis shared the video today and quizzed his readers on the cause of the phenomenon. More specifically, he asked whether the effect is due to shutter speed, as the title claims, or frame rate. Here’s a good explanation offered by an anonymous reader:

[…] it’s a factor of both. Since each frame has to ensure the blade is in the same position as the last it therefore needs to be in sync with the rpm of the rotar blades. Shutter speed then needs to be fast enough to freeze the blade without too much motion blur within each frame.

Therefore shooting at 25fps will ensure the rotor blades are shot in the same position every frame. Each frame then has to be shot at a fast enough shutter speed to freeze the blade for minimal motion blur.

We shared a similar video earlier this year in which a guy was able to make a stream of water look as though it was frozen in mid-air, simply by using a speaker to synchronize the vibration frequency of the water to his Canon 5D Mark II’s frame rate (in fact, we linked to this video in that post).