Netflix purchased the rights for the upcoming movie Kodachrome in September 2017, and today it just released the film’s 2.5-minute trailer. The movie is a story that’s centered around the final days of Kodachrome film. 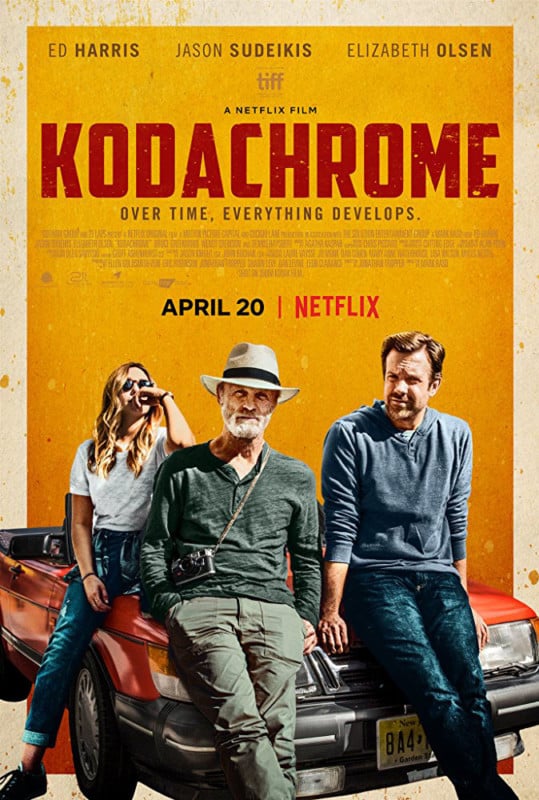 The film stars Ed Harris as a bitter, dying old man who’s a seasoned photographer and estranged father. He and his son (Jason Sudeikis) reunite to take a road trip (with his nurse, Elizabeth Olsen) to develop the photographer’s Kodachrome film at the last Kodachrome-capable photo lab remaining in the country.

Struggling A&R executive Matt (Jason Sudeikis) finds his world turned upside down when his estranged father’s nurse (Elizabeth Olsen) shows up unexpectedly in his office. Matt’s father, a famed bad-boy photojournalist (Ed Harris), is facing terminal cancer and his dying wish is for Matt to join him on a road trip from New York to Kansas to process his last rolls of Kodachrome film before the sole remaining lab closes and those captured moments are gone forever. Kodachrome tells the story of three damaged people coming to terms with themselves, each other, and a world swiftly changing from analog to digital.

You’ll be able to watch Kodachrome on Netflix starting on April 20th, 2018.

These Volkswagen Beetle Photos Were Shot on a Table