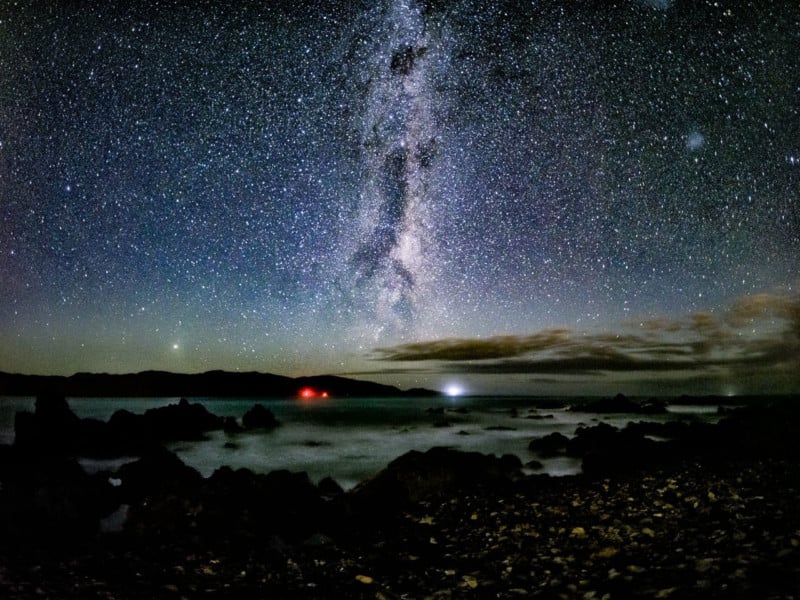 Photographer Jonathan Usher of Wellington, New Zealand, recently created this photo of the Milky Way rising from the horizon near his city. But get this: he wasn’t using a tripod or any other stabilization — not even a rock. It’s a “60-second exposure” shot handheld.

“How does one hold a camera still enough for a full minute?” you might be asking yourself.

That is pretty darn hard to do, if not impossible, but Usher had a trick up his sleeve: he captured and stacked multiple exposures for a cumulative exposure time of 60 seconds.

“I’ve been having good success with 10 second exposures handheld with my new Panasonic G9 Micro 4/3 camera,” Usher tells PetaPixel. “But I wanted even higher quality — something I could print out say 16×20 inches or so.

“But holding a camera still for a single exposure of 60 seconds — nope, I can’t do that. What I CAN do though is hold the G9 steady for 6 second exposures, 10 times in a row, and stack the resulting images to improve quality.”

So late last month, Usher went out to Wellington’s south coast after the moon had set and shot 10 separate 6-second handheld exposures at ISO 1600, 8mm, and f/1.8. After stacking the 10 photos in post, the dazzling photo of the stars emerged.

“The noise level in the result is rather low and this will print very nicely,” Usher says. “I hope you enjoy the result of my experiment! It shows even without a tripod, a very nice image can be possible.”

Update: It’s clear readers were not happy with our original choice of title for this post. We’ve added quotes around “60-second” to make it more clear that it’s not a standard single exposure prior to reading the text — our goal was to not spoil the “trick” immediately from the title, but we didn’t choose the right way to do this. Apologies.

Update: Here’s a short read on the subject of exposure stacking. The question is: “Can 30 1-second exposures be combined to a form the equivalent of a single 30s exposure?”

Fundamentally you’re capturing the same amount of light in either case so the results should be the same.

Practically, there are 2 differences between stacking 30 one second exposures and shooting one 30 second exposure. The first is the light lost between each one second exposure after the shutter closes before it reopens for the next exposure. This can cause problems with light trails of fast moving objects (such as cars), but is otherwise unlikely to cause significant problems.

The second is that doing 30 one second exposures requires 30 reads from the sensor, so you will get 30x the read noise (errors that are picked up as the signal is read off the sensor before it is converted to a digital value).