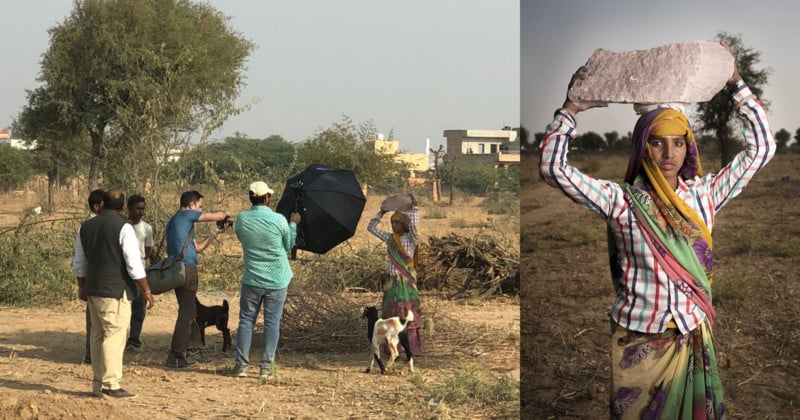 Driving through the cities and villages of Rajasthan provides for an intimate view of rural India. The sun-drenched countryside is dotted with a resilient vegetation common to drier, desert, climates. Villagers, mixed in with cows, herds of goats and the odd camel, walk the long stretches of roads between villages, pausing for rest under the sparse shade of Khejri trees. This is a part of the tourist trail that is rarely seen.

The usual stops along the Rajasthan tourist trails are the cities of Jaipur, Ajmer, Jodhpur, and Udaipur. Air-conditioned tourist vans carrom between these cities, anxiously keeping to a timetable as they ferry their passengers between forts, historic temples and faded palaces that now serve as heritage hotels.

In between these cities, the lives of villagers go on unvisited. Their lives are linked to the annual monsoons, the growth of the wheat crops and eking out a living between the crop seasons.

Not all are tied to the land for a livelihood, of course. Many work as ad-hoc workers in the construction industry. They gather near roundabouts in the cities, waiting to be picked up in a truck each day for itinerant labor. The men mix the mortar, break down blocks of sandstone that go into building walls and buildings. Women carry these sandstone blocks on their heads — one at a time — until a veritable mountain has been moved. Sand, for mixing into mortar, is moved in metal bowls, balanced on the heads of women.

Goat herders, milk men, potters, camel owners giving rides to tourists and children tending to livestock or clearing bundles of sticks from the farmland round out the village scene. Amongst the bustle of daily life, children visiting from the cities bring out proud grandparents into the courtyards of their homes for an impromptu gathering and celebration.

Over the course of two weeks in December of 2017, we drove over 500 miles through countless villages. Knocking on random doors led us to delightful surprises. An actor getting dressed up as the deity Hanuman welcomed us into his courtyard to watch him get ready; grandparents welcomed us in and insisted on portraits with their children; the owner of a buffalo wanted a portrait with his prized cattle.

Further away from homes, we ran into countless children — some bravely struck poses of their favorite cricket stars, while others stared into the camera with gravitas that belied their ages. In the construction fields, women laborers approved of the relief from work by putting down their heavy metal bowls and posed by the mounds of soil that they would have to move by hand.

Portraits In The Field

With a background as a studio photographer, creating environmental portraits fell into a familiar pattern for me: Ask for permission, explain my motives, engage the subject in a conversation to put them at ease and draw out their character, create the portrait with the right equipment and then thank them for their cooperation.

Walking up to a stranger and asking for permission to create a portrait — in a foreign land, no less — seems like a daunting task. Fortunately, the hospitality and genuine curiosity of everyone I met in the villages, made this a simple process.

The first step was to avoid speaking in English. Using a hired translator, I asked for permission first and then explained my motive — namely that, I was working on a portrait project of the citizens of Rajasthan. Using the local language and as importantly, a translator who was born in the local community, seemed to break through any hesitancy on the part of my subjects. I made it a point to ask for names and occupations as well as to ask follow up questions about their daily activities. Showing a genuine interest in their lives seemed to seal the deal every time.

To keep my outfit light, I was traveling with a Sony α7RII mirrorless camera that was paired with Leica M lenses. The majority of the environmental portraits shown above were all taken with a 35mm Summilux lens while the close-ups of the men were taken with a combination of 50mm Summilux and a 90mm Summicron lens.

Using a manual focus lens takes some getting used to but these lenses are my day-to-day workhorses and their diminutive size and the well-recognized quality of optics made them the perfect companion for the Sony camera. Perhaps it is just confirmation bias, but I felt that the small equipment allowed my subject to focus on building an emotional bond that enabled the portrait to be made quickly. Larger studio equipment, including a tripod, would have placed a physical barrier between us and made it that much harder to get to the collaborative state required for portraits.

Harsh sunlight left dark shadows on faces, the odd goat (or two) butted up against my leg as I tried to steady myself without a tripod, all while a helpful translator tried to convey my instructions to the subject. Years of practice at home, allowed me to set my photography on auto-pilot while I tried to make a connection and elicit a relaxed expression from my subject.

For the most part, I had little control over the surroundings. With a few minutes to take a portrait, I was forced to rely on whatever the background presented itself. In most cases, I encouraged my subjects to step out of the sun and into the inviting shade of a nearby tree or house. This inevitably reduced the squinting of the eyes while enabling me to balance exposure on the face with the surroundings.

To separate the subject from the cluttered background — often just shrubbery and trees — I exposed to about 2 stops below the background lighting. With the camera set to ISO 50 (the lowest I could go), the shutter speed set to 1/250th of a second (my max sync speed) and my aperture set to about f/5.6 or f/8, the light meter in the camera indicated a two stop underexposure. This darkened the background and prevented it from competing with my subject for attention.

Now I turned to my unpaid lighting assistant. This was usually the lucky fellow who happened to wander by and stopped just long enough to look inquisitively at what I was up to. With a polite but authoritative smile, I handed him my Westcott 36″ Rapid Octa XL softbox. Built on an umbrella frame, this light modifier quickly pops open and you can leave both diffusion panels permanently attached to it. Time to deploy is just a handful of seconds and invaluable in the field when juggling a camera with the other hand.

Using a Bowens mount S-type speedlite bracket, I slipped a Godox eVolv 200 portable light into the Westcott. This gave me 200 w/s of light out in the field without having to juggle external battery packs or additional cabling of any kind. Indeed, for the two weeks, I left the Godox embedded in the Westcott — just folding it down like an umbrella in between use. I can’t recommend this combination enough for lighting in the field. The double diffusion panels of the Westcott robs you of 2 stops of power but provides a soft light that can alleviate any shadows on the subject faces.

A Godox XT1-S off-camera flash trigger was mounted on the camera hotshoe to act as a radio transmitter for the eVolv. The XT1-S and the eVolv were both left on full Manual mode (instead of TTL) to give me a consistent exposure between shots and the flash power was set to a ratio of 1:1 (full power).

High Speed Sync (HSS) was simply not an option. Firing at full power, switching to HSS led to a vampire like power loss that left me with a severe flash underexposure. In the end, I stayed at my camera sync speed and maneuvered the subject into shade rather than try to overpower the sun with a 200 w/s flash.

The above combination of camera and flash setting proved to be a durable formula. Over two weeks, sunny days dominated — albeit with plenty of haze and smog in the background — and I rarely had to change any settings on the camera.

Any portrait, even an environmental sitting in the deserts of Rajasthan, require the collaboration of the subject and the photographer. As I quickly found out, this involved saying “thank you” and then graciously accepting their gratitude in whatever form it was offered.

This meant quite often putting away the camera (and the day’s schedule) and walking with the grateful villager back to his home so that his family could share a cup of chai with us. This quickly became the highlight of my photography adventures in Rajasthan. The incredible taste of freshly made chai — often with milk that came from a nearby cow — while sitting crosslegged with my former subjects will be part of my memories of the hospitality of the Rajasthani villagers.

Some mornings ended up with us enjoying a half-dozen cups of chai before lunchtime. It would have been a faux pas to have declined even the sixth cup of chai and would have made it that much harder for the next photographer to visit the village.

The vast majority of our subjects enjoyed our company and the collaborative process of creating the portraits, and would only accept our thanks. To show my added gratitude, I printed out a small instant picture (similar to a polaroid) using a Fuji Instax Share SP-2 printer. I transmitted an image from the camera to my iPhone using Bluetooth and then used the Fuji Instax Share app to print out the image on the hand-held printer. These little mementos became very popular. Indeed, after we printed out the first thank you picture, we were quickly surrounded by eager volunteers for the next portrait.

A few villagers — understandably, given their economic situation — preferred a cash payment.

This was usually negotiated beforehand and ranged from 10₹ to 200₹ range (about 16 cents for children up to a little over $3 for groups of adults). The Fuji Instax prints cost about 50 cents per print. So whether I parted with a print or cash, my costs averaged out to roughly $1 per portrait taken. Quite a bargain when you consider that I left with priceless memories of new friendships created under the beating sun.

Two weeks of driving hundreds of miles through the Rajasthan countryside left us with indelible memories of the people we had met. We will always remember the deep generosity of those who had so little in the way of material possession.

As Pico Iyer, with whom I began, wrote, “we were the eyes and ears of the people we meet, their only contact with the world outside.” Remembering these words, we did our best to be ambassadors of not only our country and culture but also representatives of all the photographers and adventurers who had yet to come.

About the author: Shourya is an amateur photographer based in the greater Washington, D.C. area. The opinions expressed in this article are solely those of the author. You can find more of his work on his website and Instagram. This article was also published here.

Can You Explain This Line in This Super Blue Blood Moon Photo?