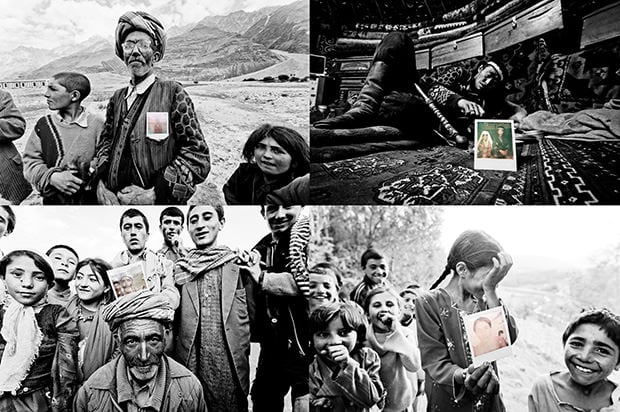 After reading about the Wakhan Corridor in the New York Times, French photographers Fabrice Nadjari and Cedric Houin decided to visit the remote region in Afghanistan in the summer of 2011, walking for 24 days through a 140 mile stretch. Their project, titled “Traces of Time”, involved capturing instant photos of the villagers they met:

When [Nadjari and Houin] arrived in the first village, they found that even photographs, which freeze time, worked differently. The portraits they took with Polaroid cameras developed oddly, and degraded rapidly, because of the high altitude and harsh conditions. But this made them no less valuable to their subjects, many of whom had never seen a photograph. Some had never seen an outsider.

The local Afghans marveled at the fragile images and lined up to have their photos taken.

“There was something extremely precious in the way they were holding the image, in the way they wanted to get it as soon as it got out of the camera,” Mr. Nadjari said. “It was both the gift and the interaction.” [#]

The photographers soon decided that they would shoot portraits of the villagers holding their own portraits, with the instant photos seen in color while the rest of the portrait is converted to monochrome, saying that it “stops time, and mixes the past and present. The present looks like the past, and the past like the present.”

A Hard Trek to Humility (via Photojojo)

Apollon: Concept Cameras that Connect Together for Social Photography