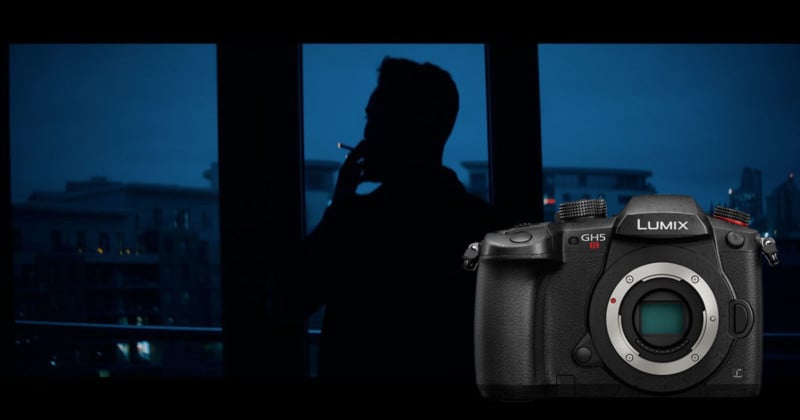 A few weeks ago I was lucky enough to get my hands on the brand new Panasonic Lumix GH5S in time to start shooting for our new short film 4:17 AM. The shoot was going to take place mainly at night and early morning, so when I heard about the GH5S, I thought it would be the ideal testing bed for the new camera.

I’ve also spent the last few months assembling a collection of anamorphic adapters and associated accessories and I decided that this project would suit shooting some scenes in anamorphic too.

The concept of the film that Isabel, our creative director, developed was to attempt to abstractly represent the turbulence of the human relationship with sleep and to visually show the moments, mental crossroads and the drifting in between consciousness.

You can see the full film here:

As a super small team that consisted of Isabel, myself, Declan (who was acting), and fellow Panasonic ambassador Ross Grieve shooting some BTS we knew we had to keep the kit fairly light as I’d be doing the shooting, lighting and everything else in between. 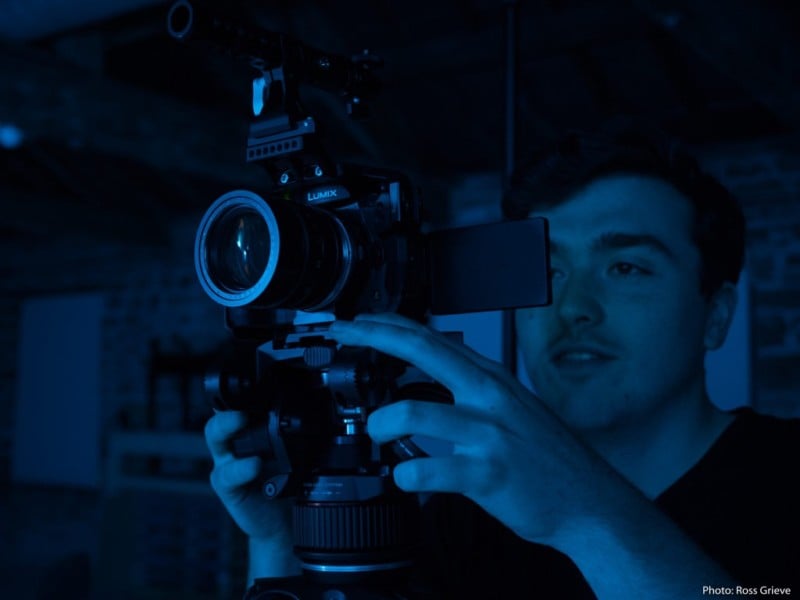 On the camera front, we had one GH5S with a set of Leica Rs (28, 50, 90) with Metabones .71x and Aputure LensRegain .75x, Panasonic Lecia 15mm 1.7, Bolex Moller 8/19/1.5x anamorphic, Moller 32/2X anamorphic and Iscomorphot 16/2x anamorphic with Rectilux Hardcore DNA, Jim Chang’s V2 clamp set up, 8Sinn cage and a bunch of small rig accessories to hold it all together. Ross also brought along his Syrp Magic Carpet which we used on top of the Manfrotto Nitrotech for some of the opening shots.

As a small team, we also needed to be flexible with the lighting, so we had a small lighting kit consisting of an Aputure 120D, Aputure Mini20 kit and a couple of Manfrotto LYKOS LED panel lights that could all be run both on mains and battery power for location. We used the compact Manfrotto Combi-boom for most of the outdoor shooting and c-stands for indoor shots. 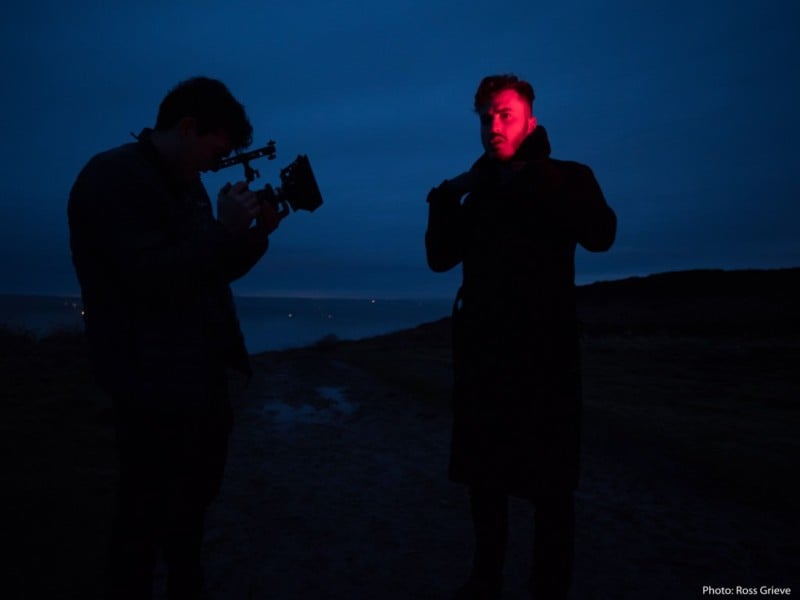 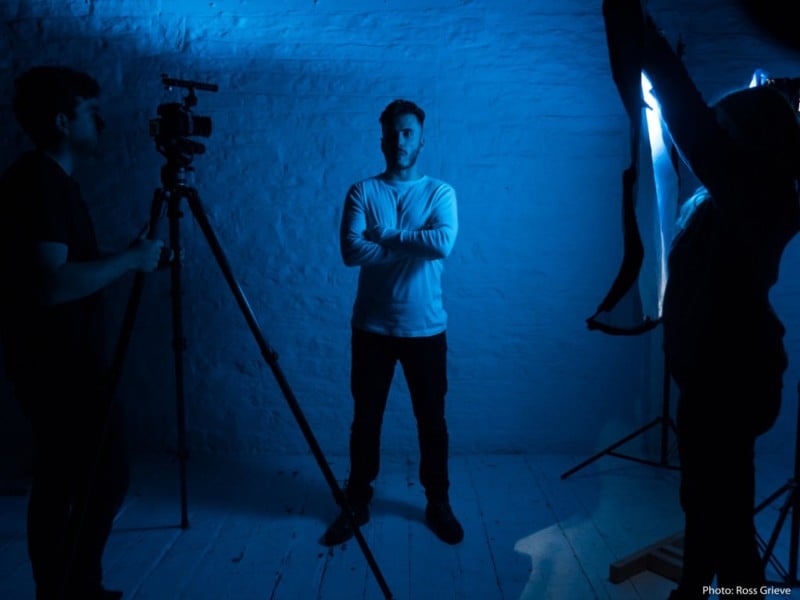 We shot the film over a period of an evening, full day and the following morning, where we tried to shoot before sunrise and after sunset when the sky had a bit of color left in it. Due to the nature of the shoot, except for a couple of shots, the bulk of the shooting was done between ISO 800 – 6400.

A quick disclaimer: this won’t be a heavily technical review of test charts etc, there are people way more skilled at those than me. The below is my honest thoughts from shooting with this camera over the period of a couple of days on a small, agile set, the type that many Lumix GH5 users will be familiar with.

The standout feature of the Lumix GH5S for me is it’s potential to shoot improved low light whilst keeping the great codecs and framerate options I’d come to love from my Lumix GH5. As I knew that I’d be shooting a lot in low light for this film, I was excited to put the camera through its paces. I’d been eyeing up a Panasonic EVA1 for a while now and to hear that the new Lumix GH5S had the same Dual ISO technology inherited from the larger Varicam range was great. Whereas the EVA1 has Dual ISOs of 800/2500, a quick test of the GH5S shows it to use 400/2500 for its Dual ISOs.

If you’re not familiar with the Dual ISO concept, there are basically two circuits right after each pixel and before the gain amp, one for each ISO which allows for two ‘native’ ISOs. In theory, this will allow you to shoot clean images in much lower light conditions than a camera with a single lower native ISO. The benefit of Dual Native ISO is that the low light improvement is coming directly from the sensor, rather than just boosting the gain and adding noise reduction.

The great thing about the Lumix GH5S is that there is an Auto Dual ISO option, which will change the native ISO on the fly, giving you the best possible quality at each ISO. ISO 160 to 800 will use the native 400 ISO and everything above 800 up to 51200 will use the higher 2500 native ISO, so no need to worry about changing it manually unless for a creative reason.

When I took the footage from this shoot into edit, I was amazed at how clean the V-Log L footage was even at 6400 ISO. Even after pushing the 10-bit 25p footage and 8-bit 50p footage around in post, the noise still seemed remarkable. It’s hard to say for certain, as I haven’t done any direct side to side comparison, but my gut says that the GH5S has around 1.5-2 stops more useable ISO in low light and it’s also much cleaner throughout the range too. Whereas before with the GH5, things started to decline after 1600, I’d be happy to shoot this camera up to ISO 6400. The frame below was at ISO 5000. 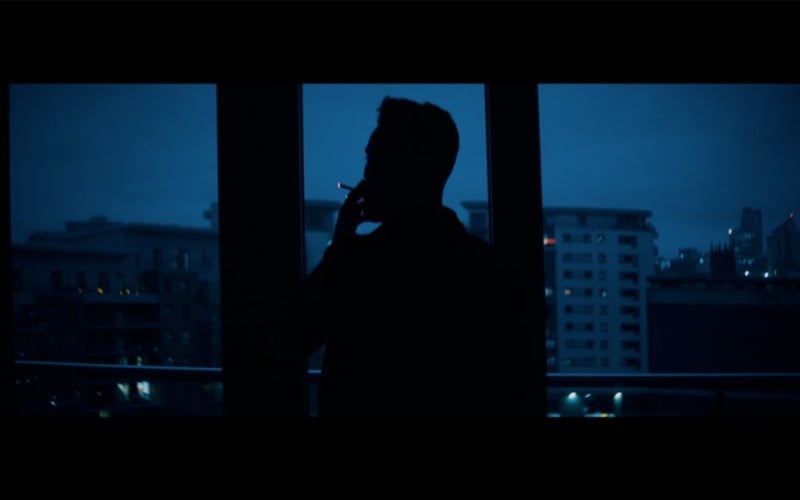 Low Light Aside, What Else is New?

As well as being a low light beast, the 10.2mp GH5S sensor is also multi-aspect, which means that the FOV will remain the same regardless of the aspect ratio you chose. This also allows for true cinema 4K in 50/60p, which is a first for a mirrorless hybrid camera.

If you’re coming from a GH5, ergonomically this camera is identical. The body and button placements are almost exactly the same, except for the new red ring around the drive dial and the new REC button on the top plate.

The variable frame rate options have also got a boost up to 240fps. You can now run timecode in/out using the included BNC adapter cable through the flash sync port, great for people recording external sound or running multiple cameras. You can also now select Line/Mic levels for the Mic input if you want to run your input at line level.

There are also some nice usability features included too such as the night mode from the Lumix G9, Liveview Boost, which boosts the brightness of the display allowing you to compose in very low light, and the focus magnification also got a boost to 20x rather than 10x on the GH5.

As well as the new features, there’s also the pretty much everything still there from the GH5 V2 firmware including anamorphic de-squeeze, waveforms, HLG, V-Log and of course 10-bit 4:2:2 shooting.

One of the things that people might be disappointed in, is the lack of in-body image stabilization. For high-end productions, where the GH5S might be locked down inside moving vehicles, the fixed sensor will be a welcome change, but for the run and gun shooter, IBIS was a super popular feature.

I’m torn on my thoughts on the lack of IBIS, which means each camera will probably have a distinct role in my bag, whereas a GH5s with IBIS would have made my GH5 redundant. I did, however, shoot about 80% of 4:17 AM completely handheld and I’m very happy with the feel of the footage. 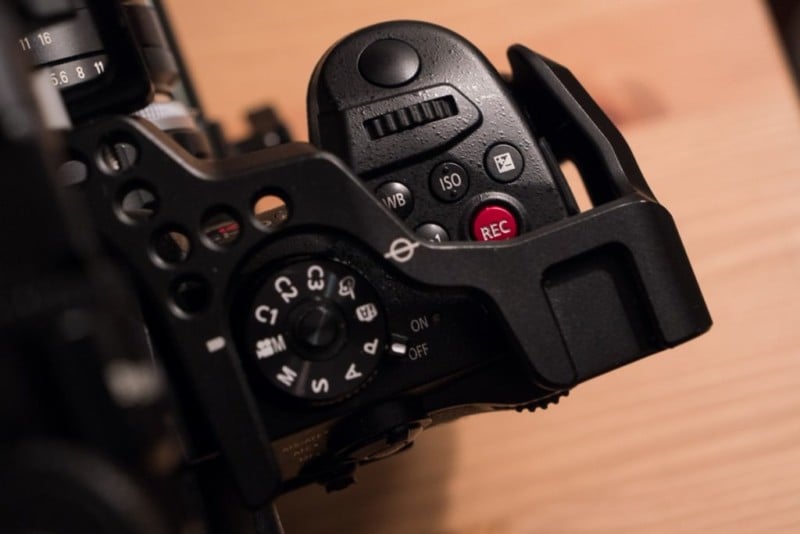 In my opinion, the GH5S is a more specialized camera and less of an all-rounder than the GH5. It’s one I’d pick up for low light specific shooting or when I was running the camera on the gimbal.

For my run and gun travel work, I’d see myself carrying the GH5 and for higher end productions with more kit, the GH5S would be the camera of choice.

The beauty of the system is that they’re ergonomically identical and so all of your accessories, cages, batteries etc will all fit the GH5S as well as the GH5. This makes adding the GH5S as a second body and using each camera to their advantage is not going to be made more expensive by the need to rebuy lots of new gear.

Full disclosure: Jacob James is currently an ambassador for Panasonic UK, Manfrotto, and X-Rite and has partnerships with Paramo, Eagle Creek, and Phottix.

About the author: Jacob James is a travel and cultural documentary photographer based in the UK. The opinions expressed in this article are solely those of the author. His work has been published widely in publications across the Web and world. You can find more of his work on his website. This article was also published here.

Rant: How Sony Can Fix the Terrible Menus on Its Great Cameras